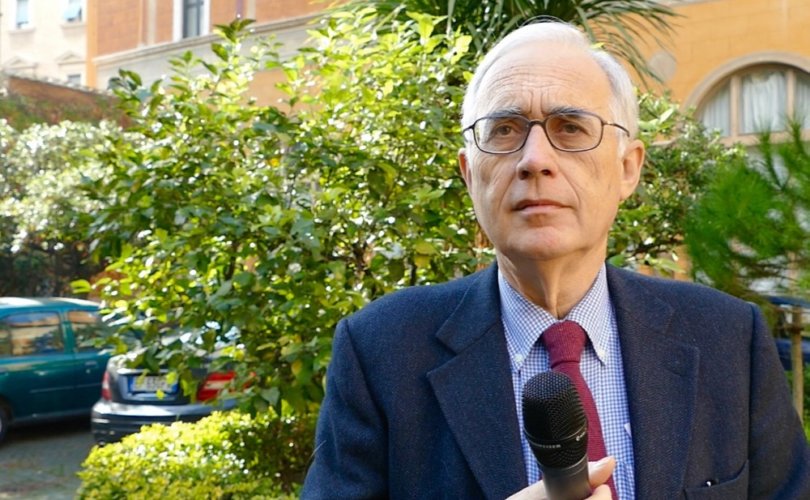 ROME, December 5, 2016 (LifeSiteNews) – Italian Catholic historian Roberto de Mattei has stated that Pope Francis’ refusal to answer questions by the four Cardinals about whether Amoris Laetitia conforms to Catholic teaching is itself “already an answer,” the implications of which, he says, indicates that the Catholic Church has entered into a “religious civil war.”

“This situation is so grave that a neutral position is no longer possible. Today we are in a war, a religious civil war,” de Mattei told LifeSiteNews in an exclusive interview in Rome last month.

“It is important to comprehend that today there is a clear choice between fidelity to the Church, to the perennial Magisterium, or infidelity, which means errors, heresy, and apostasy,” he said.

De Mattei, a professor at the European University of Rome and the president of the Lepanto Foundation, stated that there is “tremendous confusion inside the Church” caused by the pope’s ambiguous moral teaching, especially as found in his April exhortation Amoris Laetitia, which he said has caused “division” and  “fragmentation” among bishops, priests, and the faithful.

The exhortation specifically has been criticized by faithful Catholics for undermining the indissolubility of marriage, opening a door for couples in adulterous relationships to receive Holy Communion, and for making conscience the final arbiter of morality. As some critics feared, the exhortation is already being used by some liberal bishops to welcome openly homosexual “families” into parishes and for allowing adulterous couples to receive Holy Communion in certain cases.

When the four Cardinals privately asked the pope in September — following a standard procedure within the Church — whether the exhortation conforms to Catholic teaching on marriage, the sacraments, and conscience, the pope failed to answer their questions.

Specifically, they asked: 1) whether adulterers can receive Holy Communion; 2) whether there are absolute moral norms that must be followed “without exceptions;” 3) if habitual adultery is an “objective situation of grave habitual sin;” 4) whether an intrinsically evil act can be turned into a “‘subjectively’ good” act based on “circumstances or intentions;” and 5) if, based on “conscience,” one can act contrary to known “absolute moral norms that prohibit intrinsically evil acts.”

The cardinals then went public with their questions last month, only to receive harsh criticism from high-ranking prelates, including two who were recently made cardinals by Pope Francis. The four stand accused of being “troublesome,” in need of “conversion,” of committing “apostasy” and “scandal,” of giving the pope a “slap in the face,” and of creating “difficulty and division.”

But de Mattei argued that it was not the four cardinals who created the problem, but the pope.

De Mattei said that the cardinals acted in a “perfect way from a canonical point of view” when they submitted their five questions (dubia) to the pope.

“I consider it very grave the fact that the Pope, who is the supreme head of the congregation, didn't want to answer. This is already an answer, in fact,” he said.

De Mattei called it “very opportune” for the cardinals to pursue what one of them —Cardinal Burke — called a “formal act of correction” of the errors found in the Pope’s exhortation.

“The importance of this initiative is not only to warn the Pope about the errors found in Amoris Laetitia, but also to warn the faithful, to inform the faithful, because among the faithful there is confusion but there is also ignorance. And I think that we have the duty to make the faithful aware of the gravity of this situation,” he said.

“This situation is so grave that a neutral position is no longer possible. Today we are in a war, a religious civil war, unfortunately. I don't like this war, but we are engaged in it against our will. We have not created the situation, but this situation obliges everyone to pursue a clear position. And for this, I think we have to thank the four cardinals for their courage and to push them to continue their action and their witness,” he added.