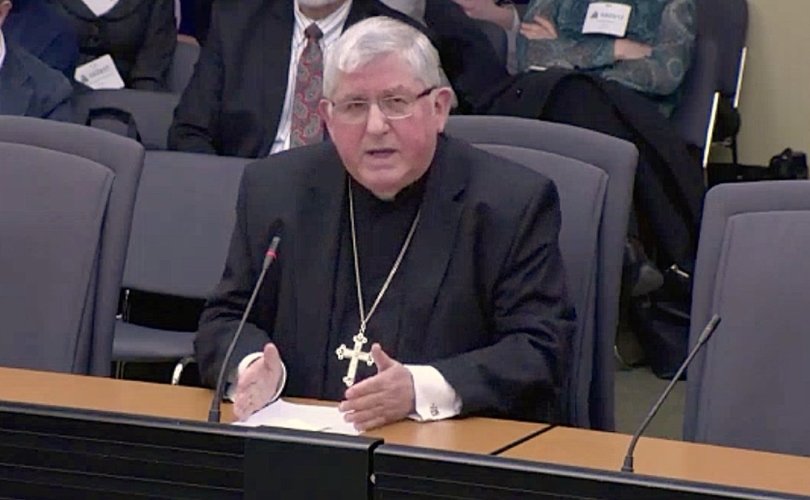 TORONTO, March 24, 2017 (LifeSiteNews) — Doctors who refuse to kill a patient “need protection so that they can act according to their conscience,” Cardinal Thomas Collins, Archbishop of Toronto, told the Ontario legislature on Thursday.

“It is sad that I and others need to come before you today to urge you to protect these devoted healers from the punishment which they face if they refuse either to administer a lethal injection to their patients or, in effective referral, to arrange for that injection to be administered,” he told Ontario's Standing Committee on Finance & Economic Affairs.

The committee is holding hearings on Bill 84, a Liberal government bill that would govern the practice of euthanasia or assisted suicide in the province.

The bill was introduced December 7 in response to the federal Bill C-14, passed last June, which outlines the circumstances in which Canadians can be legally assisted to kill themselves or be euthanized. The federal bill was a response to the Supreme Court ruling in February 2015 that overturned the country’s ban on physician-assisted death with the argument that the ban “unjustifiably infringe[d]” on a person’s Charter rights to life, liberty, and security of the person.

Critics noted after the bill’s introduction that it lacked conscience protections for doctors who do not want to participate in the death of their patient. Last month a broad-based coalition of doctors, lawyers, and activists launched a campaign for a conscience rights amendment to be added to the bill.

Without such explicit protections, doctors who refuse to cooperate with killing their patient face penalties, including losing their license to practice, from The College of Physicians and Surgeons of Ontario (CPSO). The College already has a policy in place compelling physicians who conscientiously object to killing their patients to refer them to a willing, accessible colleague. This is called an “effective” referral.

A conscience protection amendment to Bill 84 would override the “effective” referral demands of the CPSO policy.

Collins told the Committee that it was an “unjust dilemma” for CPSO to tell doctors who have a moral difficulty with killing a patient to “either do it, or make it happen.”

“When [doctors] are put under pressure to do [euthanasia and assisted suicide], that’s not fair, that’s not right. […] It is causing misery. It’s bullying. Somebody has to stand up about this. And if it’s not the legislature, then I ask who?” he said when answering a question after his presentation.

The Cardinal called it “particularly troubling” that the bill has a clause to protect the rights of doctors who decide to “help to kill their patients” while it does not “provide any legal protection to those who ask not to participate in the act.”

“I am appealing to you today to work across party lines with your colleagues to include an amendment that will provide robust conscience protection for those who do not wish to participate in or – which is the same thing – to arrange for the death of their patients,” he said.

Bishop Ronald Fabbro, President of the Assembly of Catholic Bishops of Ontario, also spoke at the meeting, telling the Committee that it is immoral for a Catholic doctor to make an “effective referral.”

“According to our Catholic teaching, providing an effective referral would be immoral because it is cooperating in the act of euthanasia or physician-assisted suicide,” he said.

“We strongly encourage you to include in Bill 84 adequate protection for freedom of conscience and freedom of religion. It’s essential,” he said.