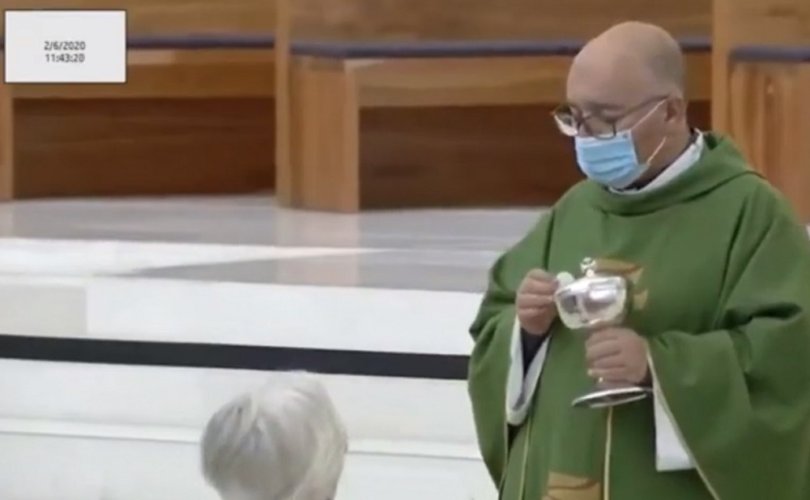 FATIMA, Portugal, June 9, 2020 (LifeSiteNews) ― A priest at the Basilica in Fátima, Portugal,  one of Christendom’s holiest shrines, was caught on camera denying Holy Communion to a woman who was kneeling to receive the sacrament on her tongue.

A video of a Mass at the Basilica of the Most Holy Trinity, celebrated on Sunday, June 2, captured the sad sight of Fr. Joaquim Ganhao, director of liturgy at the Fatima Shrine, refusing to give an elderly woman Holy Communion. Although Fr. Ganhao was wearing a mask, his surprise when the elderly woman knelt before the altar was clear. He appeared to remonstrate with her, pulling the Host back toward the covered ciborium, before sweeping past.

According to Gonçalo Sena Esteves, who brought wider attention to the poignant moment, the entire Mass was broadcast live by a nationwide Portuguese Catholic television channel.

“I made the video and published it on YouTube the next day,” he told LifeSiteNews. He added that it had been seen 10,000 times on YouTube and that many others had posted it.

YouTube seems to have removed the video. However, it can also be found on the “Senza Pagare” Facebook page and blog.

The video seems to be dividing Portuguese Catholics, some of whom support the priest’s decision not to give the woman Communion on the tongue and others who insist that the faithful Catholic’s right to receive thus has not been abrogated.

“In the middle of a pandemic, and the lady wants to receive communion in her mouth?” protested one Facebook commentator. The author of the comment pointed out that in the Gospel, the Lord Jesus tells Satan that God should not be put to the test.

However, a commentator on the “Senza Pagare” blog observed that the Church has survived many diseases and pandemics without banning Communion on the tongue and recommended that doubters “have a little faith.”

Sena also produced a video of a younger mask-wearing priest at the Fatima Basilica putting the Blessed Sacrament into the hands of a masked woman who looks at him keenly before walking away without consuming the Host. It is unknown if she ever did.

“The priest was very careless,” Sena told LifeSiteNews. “Fátima should be an example to the world but [instead] is giving a very sad example of how to treat the Lord.”

According to the Congregation for Divine Worship, receiving Holy Communion in the hand is the exception, not the rule, and a communicant who receives in the hand must consume the Host in front of the minister.

The Congregation’s 2004 Instruction Redemptionis Sacramentum, or “On certain matters to be observed or to be avoided regarding the Most Holy Eucharist,” stipulates that “[a]lthough each of the faithful always has the right to receive Holy Communion on the tongue, at his choice, if any communicant should wish to receive the Sacrament in the hand, in areas where the Bishops’ Conference with the recognitio of the Apostolic See has given permission, the sacred host is to be administered to him or her.”

“However, special care should be taken to ensure that the host is consumed by the communicant in the presence of the minister, so that no one goes away carrying the Eucharistic species in his hand,” the instruction continues.

“If there is a risk of profanation, then Holy Communion should not be given in the hand to the faithful.”

João Silviera, the author of the “Senza Pagare” blog, suggested that the woman’s suspicious behavior is “a practical example of the danger of communion in the hand, as it facilitates sacrilege and the theft of Hosts.”

Joseph Shaw, the chairman of England’s Latin Mass Society, told LifeSiteNews that receiving Communion in the hand is contrary to the universal custom of the Church, which Memoriale Domini affirms has the force of law.

“That document in 1969 also recorded the views of bishops around the world who overwhelmingly rejected permitting it,” Shaw added.

“Nevertheless, it had become established in some parts of the world as an abuse, and Bishops’ Conferences were allowed to request that their countries be given an indult to allow it where this is the case,” he continued.

“Over the years almost all have done so.”

Shaw dismisses claims that reception of Communion in the hand is the “revival of an ancient practice.”

“The form it takes today is not based on ancient example but on Protestant practise, and the change from reception on the tongue to reception in the hand very naturally reflects a theology of the Eucharist which denies the Real Presence.”

Sena told LifeSiteNews that public Masses in Portugal were permitted again at the beginning of June. The Portuguese Bishops’ Conference had recommended Communion in the hand, and the nation’s socialist government encouraged this, too.

“Our socialist public health department even made a poster, at the request of the Conference of Bishops, telling the faithful how to receive communion  and how to sit in churches,” he said.

The poster, which bears the logos of the Portugese government, Portugal’s national directorate of health, and its national health service, clearly illustrates a communicant receiving the Blessed Sacrament in his outstretched left hand, while another consumes the Host while walking away from the priest.

Doctors consulted by the Archdiocese of Portland expressed their belief that receiving the Blessed Sacrament on the hand is no safer to physical health than receiving the Host on the tongue.

“From a hygienic point of view, the hand carries a huge amount of bacteria,” argued Bishop Athanasius Schneider.

“Many pathogens are transmitted through the hands. Whether by shaking other people’s hands or frequently touching objects, such as door handles or handrails and grab bars in public transport, germs can quickly pass from hand to hand; and with these unhygienic hands and fingers people often touch their nose and mouth,” he continued.

“Also, germs can sometimes survive on the surface of the touched objects for days. According to a 2006 study, published in the journal ‘BMC Infectious Diseases’, influenza viruses and similar viruses can persist on inanimate surfaces, such as e.g. door handles or handrails and handles in transport and public buildings for a few days.”

Schneider recommended that Catholics who are not permitted to receive the Blessed Sacrament on their tongues should make a Spiritual Communion instead.

Fátima is honored by Catholics around the world as the place where three local children, Lucia Santos and her cousins Francisco and Jacinta Marto, experienced three apparitions of an angel and several of the Blessed Virgin Mary.