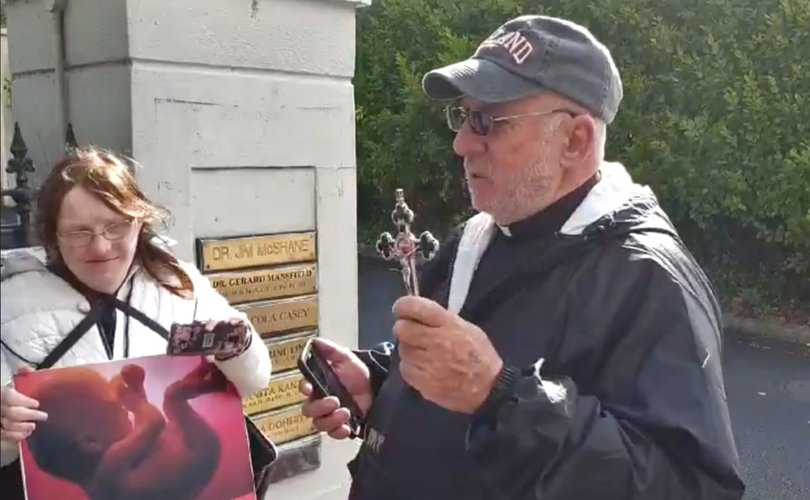 DUBLIN June 20, 2019 (LifeSiteNews) – A U.S. Catholic priest exorcised an abortion facility in Ireland to rid it of “demonic oppression.”

Fr. Stephen Imbarrato led a prayer vigil outside Dr. Jim McShane's abortuary in Glasthule, Dún Laoghaire, a port town near Dublin,  on June 15 prior to performing the exorcism. Fr. Imbarrato is a pro-life activist who is often referred to as the “Protest Priest.” He is one of the leaders of the Red Rose Rescue movement.

A video shows the priest explaining to listeners that he was conducting a “minor exorcism,” calling on God to cast away evil and “demonic oppression” from a place where the smallest of human beings are murdered.

The prayer cited St. Paul’s letter to the Ephesians, in which the apostle asks the archangel for protection in “our battle against principalities and powers, against the rulers of this world of darkness, against the spirits of wickedness in the high places.”

Much of the prayers of exorcism were inaudible in the video.

The official prayer of exorcism asks “the God of Peace” to crush Satan and to undertake to repulse the attacks and deceits of the devil.

“God arises; His enemies are scattered and those who hate Him flee before Him,” the prayer states.

Finally, the prayer seeks to drive Satan and all satanic powers from the place being blessed. Before he finished with the exorcism, Imbarrato sprinkled holy water and exorcised salt at the entrance of the abortion center to rid the place of demonic forces.

Pro-abortion forces were aware that Imbarrato was visiting Ireland. On Facebook, the Dun Laoghaire Together for Choice and Equality posted a warning before Imbarrato’s appearance at the abortion mill social media: “We have received word that the anti choice people are outside a Doctors in glashule again today. We understand that practice is not open today, but still believe this is unacceptable on many levels.”

The group called for “exclusion zones” around the abortion mills that would prevent pro-life protests and squelch free speech.

In an interview with LifeSiteNews, Imbarrato said that he was inspired to take action against abortion centers by the example set by Mary Wagner, a Canadian pro-life activist who is currently in jail after having attempted to rescue unborn babies from abortion. Others who inspire him, Imbarrato said, are Will Goodman, Matthew Connoly, Lauren Handy, and Patrice Woodworth of the Red Rose Rescue movement, who were arrested earlier this month in Flint, Michigan, and charged with felony trespass after they entered an abortion mill and tried to prevent the killing of unborn babies.

Imbarrato expressed disappointment that the Red Rose Rescue movement, of which he is a part, has not received support from what he called the “corporate, big-name pro-life organizations.” “We’ve shut down clinics for as long as four hours,” Imbarrato said, “That’s the future of the pro-life movement that deserves support.” Imbarrato said that he is “disappointed” that more bishops and other clergy have neither joined the rescue movement nor offered support. He said that Irish pro-life advocates told him that their bishops, including Archbishop Diamuid Martin of Dublin, have given confused messages about last year’s referendum that liberalized abortion in the Emerald Isle.

Imbarrato said that on the day of his arrival, he was asked by local media whether he planned to conduct activism there. He told local media that he had not planned on getting arrested. However, after being contacted by local pro-life groups, he decided to at least conduct a protest and exorcism. Having understood that he may have a claim to Irish citizenship because of his mother’s Irish ancestry, he vowed to return to Ireland one day and exercise his rights as a citizen.