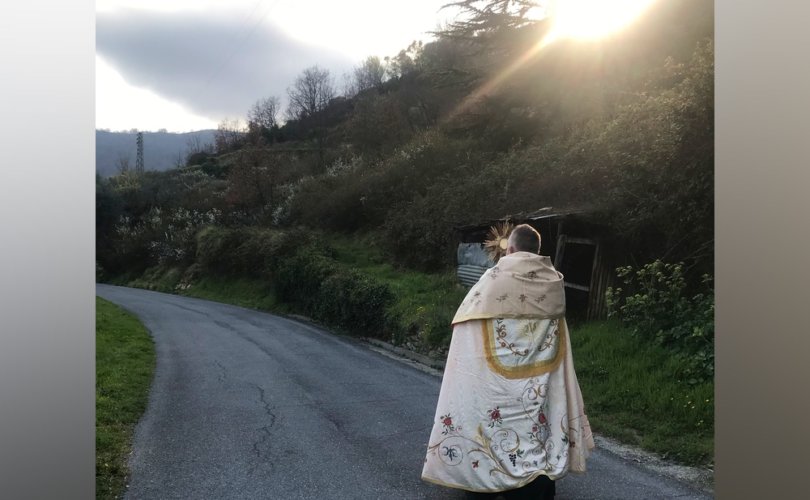 VILLATALLA, Italy, March 24, 2020 (LifeSiteNews) – A priest in Italy boldly carried the Blessed Sacrament in procession through his small town, blessing his parish, his diocese, and the whole country, which as been stricken by the coronavirus.

Father Tomaso Jozef Jochemczyk, the Polish pastor of a few small villages in Italy, close to the French border, sang the litany of saints while processing with the monstrance.

“He called down graces for the great crises in the Church and in the world caused by so many spiritual viruses,” said Sister Marie, OBI, to LifeSiteNews, adding that he also prayed for an end to the coronavirus pandemic that is ravaging much of Italy.

“While he sang songs in Italian and Polish in honor of Our Lord in the Blessed Sacrament, I took pictures and some short videos, then we sang at least two and a half times the litany of the Saints,” Sister Marie, who lives in Villatalla, told LifeSiteNews.

“He was so happy after the procession and is sure that God’s heart was moved for his faithful souls on earth,” she added. “There are so many intentions of prayers that we were both very intent on performing this act of homage with all these intentions in mind.”

Father Tomaso told LifeSiteNews why it is important to have processions with the Blessed Sacrament in this time of a pandemic. He referred to the council of Trent, which teaches that “all the sacraments contain the grace of Christ, with the exception of the Eucharist which, instead, contains the very author of grace, Jesus Christ our Savior.”

With this in mind, a Eucharistic procession is doubly important, Father Tomaso explained.

“On the one hand it is a plea to God himself to forgive us, bless us and give us strength to face danger. On the other hand, it is an act of public faith which seeks to repair the impiety which today spreads among people and in societies which reject its kingship; it is an invitation to conversion, which is less and less talked about today because it seems that the concept of conversion damages the freedom of others.”

The Polish pastor recommended that his brother priests “first of all sanctify themselves; they must attend to their own conversion, so that they may be worthy, as far as human frailty permits, to be ministers of the Lord.”

He pointed to the courage needed in our times, which “can only come from the Lord.” The priest is not a social worker, but he “gives worship to God and gives the sacraments of God to men.”

In this context, Father Tomaso praised the Traditional Latin Mass, because it stresses the role of the priest as acting in the person of Christ. “It is an immense treasure,” he said.

The pastor called priests to give their lives for their flocks, guaranteeing them the sacraments, “especially confession and extreme unction, so that souls may be united to Christ: those who are united to him, in fact, fear nothing.”

The faithful, in turn, “must make every effort to maintain spiritual recollection. This is all the more urgent today both because we are in Lent and because we are experiencing a moment of trial. The faithful know that recollection, prayer, almsgiving and sacrifice can shorten this terrible moment; the effectiveness of prayer is an invincible weapon.”

If that sacrament is unavailable, given the current state of affairs, Catholics “should make a perfect act of contrition and have the intention of confessing as soon as possible. These two acts will make them recover their state of grace.”

He emphasized that contrition is not some remorse over sins because they come with a punishment. Rather, it is repentance that is born of the awareness that sin offends God and tramples on His love.”

Father Tomaso first came to Italy more than ten years ago, attracted by the traditional environment within the diocese of Albenga-Imperia. At the time, the diocese was led by Bishop Mario Oliveri, who resigned in 2016.

The fairly new community of the Benedictines of the Immaculate had spent a few years in Villatalla, before they moved on to a former Capuchin monastery in another village. The community was founded by one of the first members of the Benedictines in Le Barroux, a traditionalist community of Benedictine monks affiliated for a while with Archbishop Marcel Lefebvre, the founder of the Society of St. Pius X, but now fully recognized by Church authorities.

The foundation of a female branch of the Benedictines of the Immaculate is currently being considered in Villatalla, where Father Tomaso says the traditional Mass every morning.

“When the coronavirus broke out, we continued to have Mass as usual, but without the faithful,” Sr. Marie said.

Father Tomaso decided to broadcast his Friday Mass online for his family in Poland as well as for friends in a Polish community in Chicago.

“The first time he did this he told me that after the Mass he would like to make a procession with the Blessed Sacrament around the church and bless the village and the city of Imperia, and all of Italy, while singing the Litany of the Saints,” Sr. Marie explained. “This we did and it was very beautiful.”

On March 21, one of the members of the Benedictines of the Immaculate made his solemn vows in the presence of the bishop of Ventimiglia-Sanremo, located right next to Albenga-Imperia. Only three faithful were allowed to enter the church on this occasion.

“I was one of them,” said Sr. Marie, “and again witnessed in Italy, the land of so much suffering and death, the beautiful ceremony of the spiritual death in Christ of a monk who lives only to love and praise God.”

March 25, 2020 update: This report has been updated with comments from Fr. Tomaso.