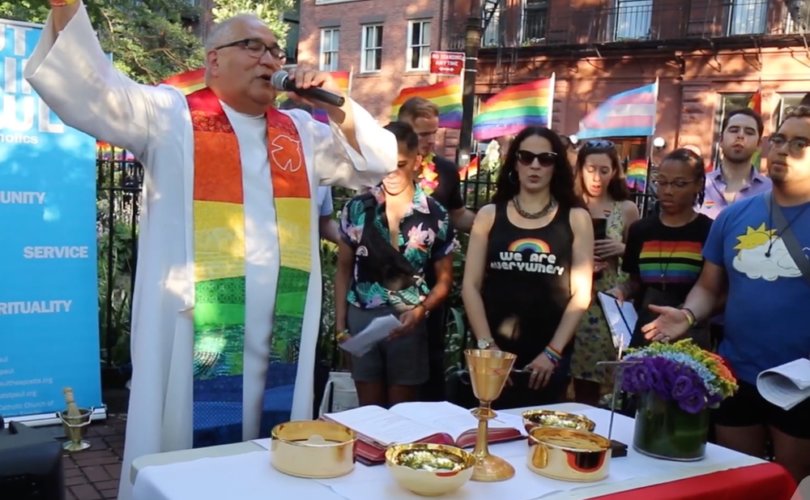 NEW YORK July 5, 2019 (LifeSiteNews) – A Catholic priest wearing a rainbow stole celebrated a pro-homosexual “pride” Mass outside New York’s Stonewall Inn, a historic gay bar, in commemoration of the 50th anniversary of the riots against police that gave birth to the “gay rights” movement.

On the table that served as an altar, there was a bouquet of flowers that imitated the rainbow flag of the LGBTQ movement. On the fence that forms the perimeter of the park that has been designated a National Historic Landmark by the federal government, there were gay pride flags fluttering. Nearby, gay pride flags, clothing, and paraphernalia were available for purchase from street vendors.

A video of the event shows men kissing and taking photos of themselves in front of the famed tavern.

The June 27 Mass was celebrated by Father Gilbert Martinez, the former pastor St. Paul the Apostle parish, which has long had an LGBTQ-affirming ministry known as Out at St. Paul’s.

“Pride is a moment of grace,” the priest said during his homily. “Because after 50 years, a sea of change has come to this country… but there’s a long way to go still,” he added.

“Christ called us here today to this sacred space to commemorate the sacrifice of those who came before us,” Martinez said. “Fifty years ago queers, considered the lowliest of the low, made a stand for their dignity. And though they were beaten by police, they were not broken. Their hope, faith, and rage built the revolution of which we stand. Take a moment to pause and look around you, see their legacy in the faces of those around you. See what God is doing in our world.”

As LifeSiteNews has previously reported, the Stonewall Riots broke out after New York police raided the establishment, which was being run at the time by the mafia without a liquor license, on June 28, 1969, on a morals charge. The raid did not go as planned. Seymour Pine, a deputy inspector with the Morals Division at the time, said that his six officers were surrounded by thousands of homosexuals and supporters who threw bottles at them, slashed police car tires, and left officers running for their safety.

“We had maybe six people and by this time there were several thousand outside,” remembered Pine, who led the bust. “The other side was coming like it was a real war. And that's what it was, it was a war…It was as bad as any situation that I had met in during the army.”

Homosexual men, many dressed as women, came to the bar that night after hearing of the raid and began pelting police with bottles, slashing police car tires, and attempting to overturn cars. The homosexuals were joined by the Black Panthers and anti-Vietnam war protesters.  They broke windows and attempted to set the Inn ablaze.

Video of the Mass shows homosexual couples standing side-by-side. Many attendees sported pro-homosexual slogans and rainbow colors on their clothing. The video revealed liturgical abuses taking place, such as a man dressed in plain clothes lifting up a chalice and drinking from it.

A request from LifeSiteNews for comment from Cardinal Timothy Dolan of the Archdiocese of New York went unanswered by close of business on Friday.

“Our hearts are a city on a hill that has been lightened by this human experience of being queer,” said Martinez.

He continued: “This is the first thing that is very important about this WorldPride celebration. It is a celebration that calls us to more, in a particular Catholic way, where pride seeks human rights. That is a fundamental central part of Catholic Church teaching. What happened here, fifty years ago, began something that people, not just gay people, people all over to awaken to human rights.”

The Catechism of the Catholic Church teaches that homosexual acts are “intrinsically disordered” and “under no circumstances can they be approved.” It adds: “They are contrary to the natural law. They close the sexual act to the gift of life. They do not proceed from a genuine affective and sexual complementarity” (CCC 2357).

The Vatican Congregation for the Doctrine of the Faith’s document Considerations Regarding Proposals to Give Legal Recognition to Unions Between Homosexual Persons says Catholics have a “duty” to oppose same-sex “marriage.”

In those situations where homosexual unions have been legally recognized or have been given the legal status and rights belonging to marriage, clear and emphatic opposition is a duty. One must refrain from any kind of formal cooperation in the enactment or application of such gravely unjust laws and, as far as possible, from material cooperation on the level of their application. In this area, everyone can exercise the right to conscientious objection.

Martinez is a member of the Paulist congregation of priests and serves as pastor of St. Paul the Apostle Catholic Community in Los Angeles. In 2016, Martinez celebrated Mass for participants in a “Pilgrimage of Mercy” organized by Notre Dame University alumni who were celebrating the Supreme Court decision that allowed homosexual “marriage.” A promotional video notes the New York parish’s commitment to “engaging” young people and “gay and lesbian Catholics” while also touting the Paulists’ ministry in publishing, videos, radio and on the Internet.