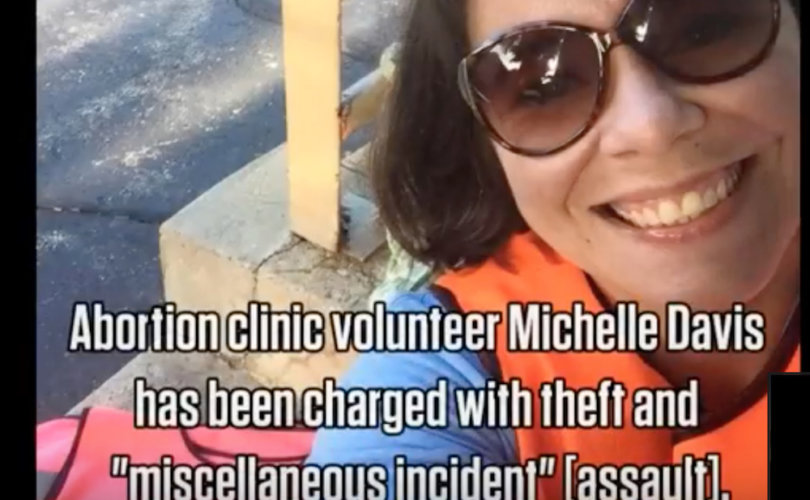 COLUMBUS, Ohio, April 18, 2017 (LifeSiteNews) – New video has emerged showing an abortion facility volunteer nearly running over a Catholic priest while trying to flee the scene after she was caught stealing signs from a recent pro-life vigil.

LifeSiteNews first reported on Thursday how Father Joseph Klee was struck by a vehicle driven by a Columbus, Ohio, abortion advocate on April 8 while taking part in the vigil.

The woman hit him with her minivan while trying to escape as the priest and another vigil participant acted to retrieve the stolen signs from her.

Father Klee was treated for his injuries at the scene of the incident outside the Founder’s Women’s Center in Columbus and subsequently at a local emergency room.

The signs the woman attempted to steal at the vigil belonged to Created Equal. The pro-life group shared its breaking footage of the incident with LifeSiteNews.

“They’re stealing our sign!” Father Klee is heard calling out as he and another vigil participant run across the street to intercept the woman.

The driver identified by Created Equal as Michelle Davis, a local abortion facility volunteer, speeds away toward Father Klee as the fellow pro-lifer retrieves the signs sticking out of her van.

“Hey, you’re gonna hit a pedestrian!” Father Klee cries out toward the woman to no avail. “Stop! Stop!”

After Davis injured Father Klee with her van and exits the scene, Father Klee is heard shouting, “Call the police! Call 911!”

The priest asks the other vigil participant if he got Davis’ license number.

“Call the police,” he then tells him. “(She) almost ran down a pedestrian.”

The two men briefly discuss whether Davis was successful in stealing the signs, before Father Klee begins to assess his injuries while they wait for the authorities.

“Look what they did to my hand,” he says, holding out his bloodied limb.

Father Klee was not able to jump completely out of Davis’ path, and his hand was caught in the grille of her minivan as she sped away.

Once police and emergency medical personnel arrived, Father Klee described for EMS how Davis aimed her minivan toward him and the resulting injury.

“They ripped up my finger,” he said. “I was at the front of the vehicle … it came at me, and turned the wheel toward me.”

“(I was) up against the vehicle like this,” continued Father Klee. “It almost ran me down.”

Father Klee had described the incident last week for another pro-life supporter not present at the vigil, telling the pro-lifer, “I was in front of the van, but she revved up the engine and appeared to not care that I was right against the front of the vehicle.”

Created Equal reported that Davis was charged with theft and with miscellaneous incident (assault).

Mark Harrington said that what Davis did illustrates a prevalent mindset representative of the abortion culture nationwide. And that the absence of a response from the abortion facility and accompanying silence in the media demonstrate the double standard held by the news media on the abortion issue

“Ms. Davis is a menace to society,” Harrington said. “Her actions are representative of the increase in violent behavior at abortion centers across America.”

“Founder’s has yet to condemn the conduct of Ms. Davis,” Harrington pointed out. “If this were a pro-life advocate being caught on video injuring an abortion supporter, it would be national news.”

Founder’s Women’s Health Center is one of two abortion facilities in central Ohio.

It was one of numerous Ohio abortion facilities operating for months at a time and longer without proper licensing.

Father Klee, a priest of the Diocese of Columbus, said just after the incident occurred on the Saturday before Holy Week that he fought against having hard feelings toward Davis.

“I've prayed for this woman, and have resisted sentiments of resentment,” he said. “After all, we're about to celebrate Our Lord's forgiveness of those who killed Him!!”

He remarked as well that sometimes pro-lifers need to push back against the culture of death and that he hoped the story of the attack would ultimately help close the doors of the abortion facility.