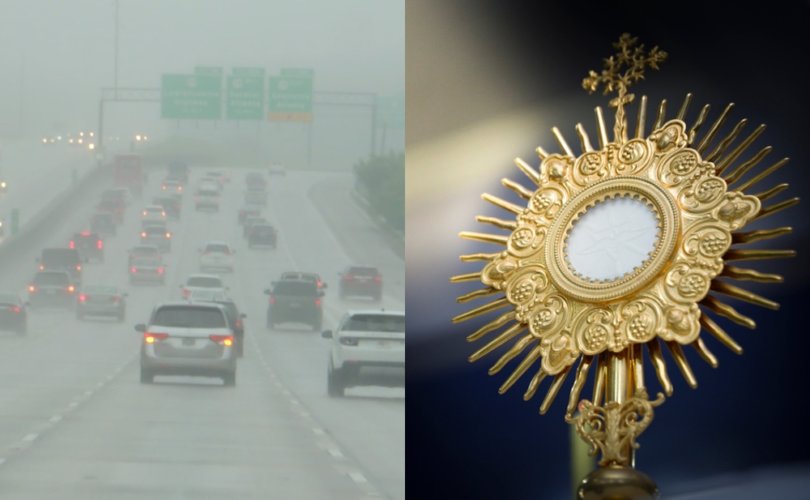 ATLANTA, Georgia, April 16, 2020 (LifeSiteNews) — Two Catholic priests drove the Blessed Sacrament exposed in a Monstrance around the perimeter of Atlanta on Easter Sunday to pray for the city’s protection and deliverance from the coronavirus. An estimated 125 cars, with lights flashing in solidarity, took part in the vehicular Eucharistic procession.

Drivers were able to track the progress of the Blessed Sacrament on the Glimpse app, and join at the various entrances to Interstate 285, which circles Georgia’s capital city of about 11 million people.

Moreover, 703 people followed online and about 200 took part in a conference call during the procession to sing Marian hymns, pray the Rosary, the St. Michael’s Prayer, and the Divine Mercy Chaplet. The hour-long event, which began at 3:00 PM with the singing of Tantum Ergo, concluded with the Divine Praises and benediction.

The inspiration for the event came from the initiative “We are an Easter People” which “encouraged people in the local area to do whatever they could to bring Jesus to the faithful,” organizer Kari Beckman told LifeSiteNews.

It also occurred to her “in prayer” that Atlanta “needed deliverance,” Beckman said.

She approached the priests at St. Monica Parish with the idea of a Eucharistic procession that would “be in obedience to the civil authorities” because people would be in their cars.

“And they said they would do it.”

The event was organized within 30 hours, and “we thought it would be small,” she said, adding that she would have been “happy if we get 40 cars.”

However, one of the priests with technological savvy suggested using Glimpse, so “everybody can see where we are with Jesus, so depending where you live in the city, you can get on the Interstate and be with Jesus.”

As a result, cars kept joining the procession and in the end, 703 people had logged in to Glimpse to follow its progress, Beckman told LifeSiteNews.

Another “little miracle” several people commented on was that the weather was “extremely bad,” but “the entire hour we were in procession it was almost like the storm completely stopped,” she said.

The Georgia Department of  Public Health reported 15,669 confirmed cases and 3,108 hospitalized with the virus as of April 16. The state’s death toll from the virus is 587.

“[A]ny activity that would encourage people to leave their homes between now” and the duration of the order — which has been extended to April 30 — “would be unwise,” Conzen wrote on April 3.

“Drive-through sacraments or devotions should be suspended until this order is lifted. We should refrain from encouraging people for the present moment to leave home to come to such Church-sponsored activities,” he added.

Beckman said many participants were deeply affected by the Eucharistic procession.

“People were crying, they were so moved to have so many people join together in such a short period of time. It was beautiful, really, really beautiful,” she told LifeSiteNews.

Beckman had seven of her eight children in her car, including two teenage daughters, both of whom wept during the procession, “and another family, the same thing happened to their kids, these young people were moved to tears,” she said.

“Because it was Easter, and we were not able to be in a church, and that was a very difficult suffering, so to do this was a closeness to Christ that was unique.”

Her hope is that other cities will follow suit, particularly for Divine Mercy Sunday, and that this vehicular Eucharistic procession will “be the first of many around the whole world,” she said.

Hope Gricus, who took part in the procession, said that prayer can cause change.

“Prayer can stop famines or change lives, so through the procession and Eucharistic benediction, that can help Atlanta,” she told LifeSiteNews.

Janice Givens, another participant in the procession, is praying for similar “creative solutions from the bishops to allow our priests and pastors to allow us to be close to Jesus” at this time.

“This must be what purgatory feels like,” she told LifeSiteNews. “We know He’s there — we just can’t get to Him.”