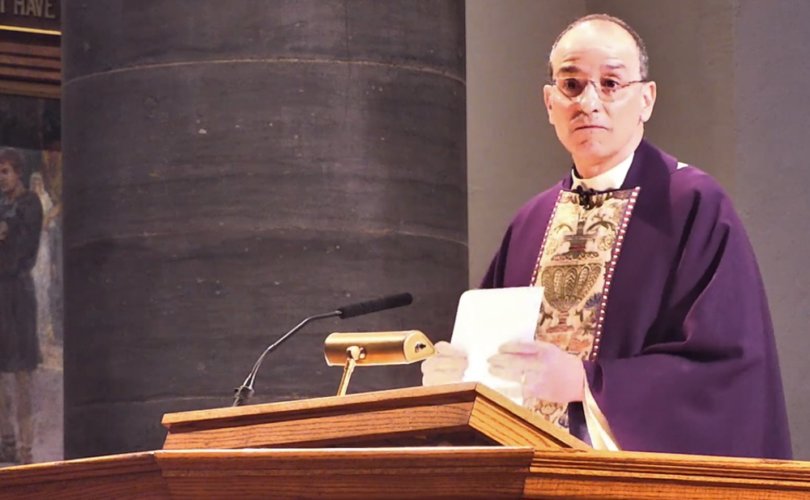 Priests from the Missionary Society of St. Paul the Apostle in parishes in New York, Boston, and Los Angeles openly lambasted the Congregation for the Doctrine of the Faith’s (CDF) decree last week that the Catholic Church cannot bless homosexual relationships. While saints such as Augustine held that once “Rome has spoken, the case is closed,” one Paulist Father said that instead of closing the matter, the CDF’s teaching “opened up a volcano.”

Fr. Eric Andrews, the Paulist Fathers’ president and pastor of St. Paul the Apostle Catholic Church in New York, began his dissenting homily with what he said was the right time to have an “adult conversation about sex.”

“The week started out with one word, ‘no,’ when the Congregation for the Doctrine of the Faith was asked, Can same-sex unions be blessed?’ It was a one-word answer that came back. And the Pope signed off on it. No. And that just opened up a volcano of feelings and a volcano of reaction,” he said.

“If the CDF foolishly thought that just saying ‘no’ would be the end of the issue, they just don’t know us New Yorkers, do they? That’s just the beginning of a much longer conversation,” he added.

— Article continues below Petition —
PETITION: Call for Vatican to rescind restrictions on private and traditional rite Masses at St. Peter's
Show Petition Text
19352 have signed the petition.
Let's get to 20000!
Thank you for signing this petition!
Add your signature:
Show Petition Text

Andrews went on to say that “saying ‘no’ to people who are in love with each other is the most futile thing you can do in the world, because love always finds a way.”

The priest said later in his homily that the Church’s call for people with same-sex attraction to live chastely is not an answer.

“To say as a Church that those who are not able to be in a heterosexual sacramental marriage must observe mandatory celibacy, we know after a year of lockdowns with Covid-19, that isn’t an answer that’s going to work either.”

Andrews, telling parents to “close the ears of your kids,” sang a clip from Frank Sinatra’s “(How Little It Matters) How Little We Know” to justify his pro-homosexual account of love. He sang the following lines from the song:

“How little we know, how much to discover, what chemical forces flow from lover to lover. How little we understand what touches of that tingle, that sudden explosion when two tingles intermingle.”

The Catholic Church, basing itself on the Word of God, teaches that homosexual acts are “intrinsically disordered” precisely because the Church loves people and wants them to follow God’s order for creation and for sexuality as part of that order. The Church teaches that God created marriage between one man and one woman as the only moral context for sexual relations which are primarily for the sake of procreation and secondarily for the sake of the union of the couple. St. Paul in one of his letters warns the Corinthians that “homosexuals” along with others such as “idolaters” and “adulterers” will “not inherit the kingdom of God.” It is because of such teachings that the Church warns sinners of every kind to repent of their sins and believe in the Gospel of Jesus Christ.

The CDF announced on March 15 that the Catholic Church cannot bless homosexual relationships since God “does not and cannot bless sin.” A question to the CDF about whether or not the Church has the “power to give the blessing to unions of persons of the same sex” was answered in the “negative” by the congregation’s prefect, Cardinal Luis Ladaria Ferrer. The congregation’s statement was assented to by Pope Francis. The Congregation stated that it is “not licit to impart a blessing on relationships, or partnerships, even stable, that involve sexual activity outside of marriage (i.e., outside the indissoluble union of a man and a woman open in itself to the transmission of life), as is the case of the unions between persons of the same sex.”

“The language employed [in the CDF statement], while reiterating current teaching, intimated that these unions for LGBT people, their deepest most powerful expressions of love, are of necessity sinful,” he said.

“Now I do not know what was in the mind of the CDF. But I do know that you cannot, with any psychological coherence, say that the most loving relationships in people’s lives, relationships that yield the fruits of the corporal and spiritual works of mercy, the fruits of the beatitudes, are of necessity sinful while at the same time saying that you welcome with affection LGBT people within the community of the Church,” he added.

Janus praised the German bishops’ dissent from the statement and the statements from German and Austrian priests that they will continue to bless homosexual unions.

The priest quoted Bishop Georg Bätzing of Limburg, head of the German Bishops’ Conference, who said that the CDF’s decree would not stop the course plotted by the German church for their Synodal Path.

Quotes Janus of Bätzing: “This [CDF decree] creates the impression of somebody wanting to shut down the theological discourse which is happening in several parts of the universal church, including Germany. But that is not possible at all, because the discussion is being led intensely and with many good arguments. The theological demands on today’s pastoral practice simply cannot be eliminated with one statement of authority.”

Paulist Father Gilbert Martinez, pastor of The Church of St. Paul the Apostle in Los Angeles, CA, said in his Sunday homily that it was “very, very sad” that the Vatican, in his words, told “lesbian people” that the Church “could not bless their weddings, their marriages.”

He said that love justifies whatever kind of sexual relationship someone may be in. He did not say if this also applies to members of the North American Man/Boy Love Association (NAMBLA) who work to abolish age-of-consent laws criminalizing adult sexual involvement with minors in the name of love.

“What we try to do is to love everyone,” Fr. Martinez said. “We are struggling with that as well. But I think at the heart of all this — and I think that what the Scriptures tell us today, those images that you can really hold in your heart — that once you give love away, it becomes really love, whatever relationship you’re in.”

Fr. Michael McGarry, Director of the Paulist Center in Boston, Massachusetts, said that the Vatican’s ban on blessings for homosexual couples were “harsh words” that caused “great pain” for members of the LGBT group at the center.

McGarry said that the CDF’s “accusations of sin cut to their heart and betrayed them in their own self-acceptance.”

LifeSiteNews reached out to the Paulist Fathers for comment by email and phone on whether as a group it accepts or rejects the Vatican’s decree that the Church cannot bless homosexual couples.

“We don’t work that quickly in terms of official policy statements. The Paulist Fathers do sometimes issue statements on things, but that’s a process that takes quite a long time. Our general counsel votes on it and there’s a lot of reflection and drafts of things. That doesn’t happen very quickly whenever we do one of those.”

LifeSite pressed if it is generally the official position of the Paulist Fathers to not accept a teaching that comes out from an official organ of the Catholic Church.

Snatchko replied that the Paulist Fathers are “sons of the church” and that they “certainly respect anything that the Vatican says.” He added, however, that individual priests belonging to the institution are allowed to make their homilies “what they want them to be.”

LifeSite asked if the Paulist Fathers have any mechanism for dealing with a priest who publicly criticizes a definitive teaching of the Catholic Church, such as the decree just issued by the CDF. Snatchko said that there are superiors in the local houses in various states who could look into such a matter but that it is “really the pastor of every parish who would make the determination of something like that.”

The Paulist Fathers have a history of pushing the normalization of homosexuality within the Catholic Church. Last month, the group publicly signed a statement put out by the pro-LGBT Tyler Clementi Foundation and backed by a pro-homosexual cardinal and various bishops that tells “at-risk LGBT youth” that “God is on your side.” In December, the Paulist Fathers offered LGBTQ “Advent Reflections” where each reflection was penned by a member of the Paulist LGBTQ outreach ministry “Out at St. Paul” which is headquartered in New York City at the Paulist motherhouse St. Paul the Apostle Church.