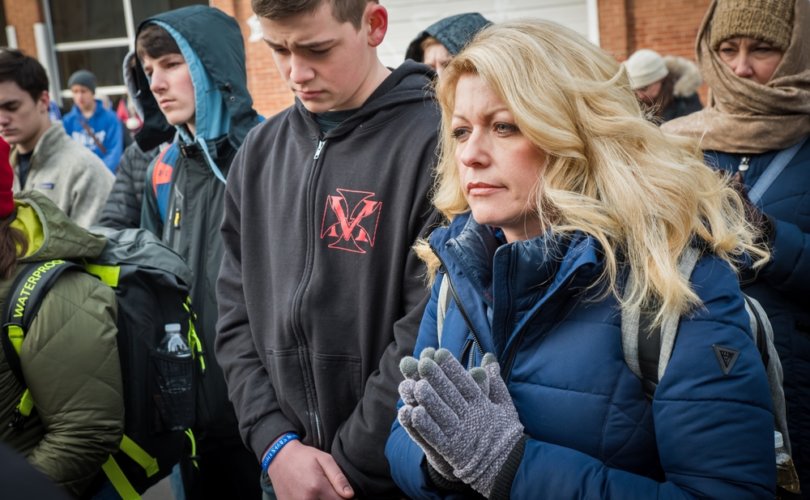 Participants at the Planned Parenthood protest in Washington D.C., one day prior to the March for Life, Jan. 23, 2020.Jim Hale / LifeSiteNews.com

WASHINGTON, D.C., January 23, 2020 (LifeSiteNews) – Dozens of pro-life advocates protested in front of Planned Parenthood’s abortion facility in Washington D.C. one day prior to the March for Life, calling for an end to the slaughter of more than 60 million unborn children since legal abortion came to American in 1973.

LifeSiteNews attended the protest with pro-life leaders in the build-up to tomorrow’s March for Life event in the capital. The event, located at 1225 Fourth St. NE, was led by Fr. Frank Pavone of Priests for Life and included speeches by leaders of the Silent No More campaign, who seek to make the public aware of the devastation abortion brings to women and men.

LifeSite spoke with a number of protest attendees from around the country who told LifeSite why they made the journey to the nation’s capital to be present at this year’s march.

LifeSite spoke with Anne Fitzgerald, Executive Director of the Day of Tears organisation, which for some years now has been calling on for January 22 – the anniversary of the 1973 Supreme Court Roe v. Wade decision imposing abortion on demand – to be recognised as a “Day of Tears” and encouraging citizens to lower their flags in mourning of aborted babies. Earlier this week President Trump, who will personally attend and speak at the March for Life event tomorrow, declared January 22 to be “National Sanctity of Human Life Day.”

Anne told LifeSite that she was attending the protest outside Planned Parenthood “to just stand in solidarity and pray for the women who are going inside and pray for their children.”

Asked if she had one message for the White House and the U.S. Congress, Anne said: “Defund Planned Parenthood! Please provide more resources for women who are pregnant. Please stop this atrocity of abortion. Stop killing our citizens. End it immediately. Give women an option and help them out.”

A young lady named Tara told LifeSite: “I firmly believe in the power of prayer. And I believe that God is going to use all these stories and these situations for the good. I was reading in my bible the other day and I read a verse that said: ‘the darkness cannot hide from the light.’ And that’s where we’re here to do, is to shed the light on just how cruel and atrocious abortions really are.”

Speaking of women who may have had or are considering an abortion Tara said: “there is healing for everyone and hope for everyone. Our God is not a God of hopelessness. He is a God of hope and he is always there for us.”

LifeSite spoke with Fr. Pavone shortly after he addressed the protest. He explained that the first thing he had done at the start of the event was to describe an abortion procedure. Fr. Pavone told LifeSite that he challenged abortion supporters and pro-abortion politicians to describe the reality of abortion.

“The last thing that supporters of abortion want to do is describe it. So I described it. This is the problem we have with the politicians, they say ‘oh yeah we want abortion to be legal’, but if you ask them to describe how it’s done they won’t dare go near that,” Fr. Pavone said.

Fr. Pavone said that the pro-life movement was essentially about “replacing despair with hope”. He said: “that’s a great way to describe the mission of our movement, both before and after someone decides to have an abortion.”

The priest said there was more hope now in the pro-life movement than ever before. He said: “in the early nineties if we had painted a picture then of the way things are now for our pro-life movement, we would have just all been astonished. The progress is tremendous.”

Fr. Pavone cited Trump’s decision to join the march as one of the reasons for increased hope, saying “for the first time in history a president is actually going to be at the March for Life. That’s not just because he’s deciding to come, it’s because he too sees the change in the nation as we’re waking up, people are waking up to how extreme and violent abortion is and how much damage it does.”

The priest said that it was coming to the March for Life as a high school senior that “awakened him to the pro-life movement” and called on others to join him in D.C. describing the march as a “life changing event”.

LifeSite spoke to a lady called Maria from Ohio who was attending the march for the nineteenth time. She said that her mother had been “a pro-life stalwart” and that when she died in 2003 Maria and her nine children had “decided to be her feet” and continue her pro-life witness. Maria added: “As a mom for nine…someday I don’t want them [her children] to look back and say ‘Mom what did you do to defend life?’”

LifeSite also spoke with a young lady whose mother had placed her in an orphanage as an infant and who had later been adopted. She said that she had come to Washington because she was happy that her mother had chosen life and not aborted her.

Fr. Dennis Boyle, associate director of Priests for Life, also attended the protest and said that he has missed just “one or two” March for Life events in forty-five years. Fr. Boyle told LifeSite that life “is the most fundamental thing” and that “if we cannot defend innocent human life then everything else that we talk about in social issues falls apart.”

Fr. Boyle said that in his view abortion is “the biggest affront against God.”