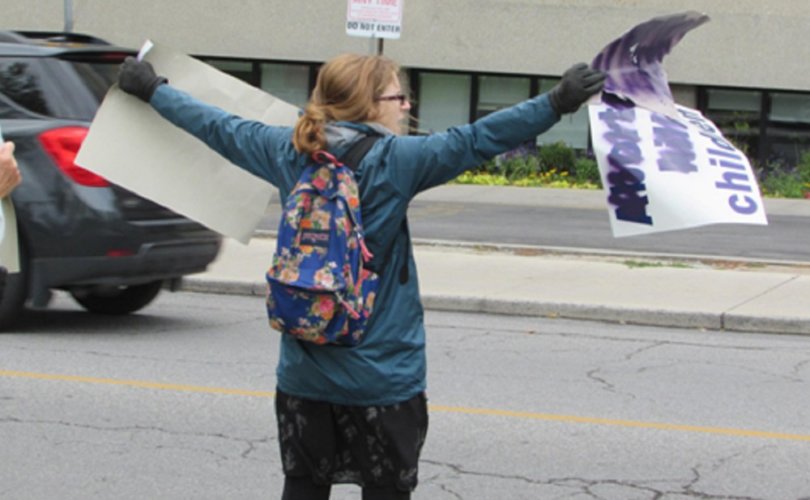 KINGSTON, Ontario, October 18, 2019 (LifeSiteNews) — The vitriol and violence of Canadian pro-abortion activists toward pro-lifers have not subsided since last year, when a man was caught on video roundhouse-kicking a young female pro-lifer.

That video went viral and has now been seen over 7 million times.

Now, one year later, as Life Chain participants peacefully stood outside a Kingston, Ontario hospital where a thousand abortions are reportedly committed each year, a female counter-protester grabbed signs out of their hands and tore them up and defaced their pro-life messages.

In one set of photos, she can be seen spray-painting over signs that say, “Abortion Kills Children,” and then steps into the street and victoriously waves them over her head.

A video taken at the event shows the defiant pro-abortion counter-protester marching away with signs she has stolen, depositing some in a trash can, and tearing up others.

A Life Chain participant who held her rosary in her hand reported that its links broke as it was ripped away from her. The rosary had belonged to a now deceased family member.

The outdoor pro-life event is part of an annual, nationwide silent witness organized by Campaign Life Coalition (CLC) that takes place across the street from Kingston General Hospital.

“The purpose of this gathering is to remind the public of the approximately one thousand unborn children that have been annually murdered by abortion at Kingston General Hospital since 1971,” organizers explained to LifeSiteNews.

That amounts to nearly 40,000 children who have had their lives cut short by abortionists in Kingston.

“This is an explicitly peaceful and silent protest,” she explained. “Participants are not allowed to begin conversations with passersby, nor are they allowed to display any aggressive behaviour at any point. No abortion victim photography is permitted.”

The pro-abortion pushback to the October 6 Life Chain event was apparently launched when a local woman decided that the pro-abortion cause lacked sufficient representation in Kingston.

Last month, Meghan Engbretson — a former Queen’s student and current study coordinator at the Canadian Cancer Trials Group — founded “Voice for Choice,” according to a report by the Queens Journal.

Voice for Choice held a “sign-making party” before the Life Chain protest.

“It is important to have the other side represented in a peaceful protest,” said Engbretson, yet the pro-abortion response to Life Chain ended up being anything but peaceful.

Once the attacks began, police were slow to respond, according to Gerry Brosso, a Life Chain participant who served as a zone captain at the event.

A constable who arrived on the scene suggested that an “anti-abortion” demonstration would of course “attract counter protests,” according to Brosso’s account.

When Life Chain participants asked the constable to consider what the Criminal Code of Canada might contain concerning the attacks that had taken place, he responded, “Do you really want to go there?”