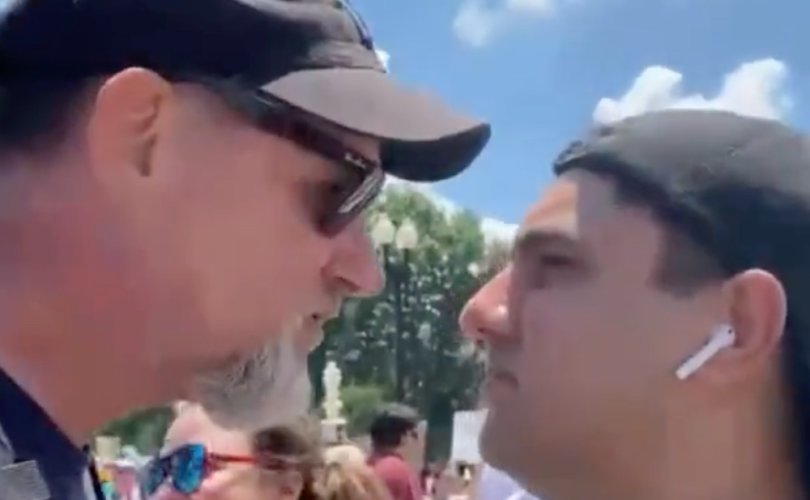 In the video, posted by reporter Drew Hernandez on Saturday, a middle-aged man can be seen and heard shouting at Hernandez while Hernandez patiently tells the man to “calm down.”

An unhinged Pro Abortion man aggressively gets in my face during a live interview in front of the Supreme Court and assaults the camera woman, Sav Hernandez | @TPUSA pic.twitter.com/Cd9VvVYck8

As the man turns to walk away, Hernandez jokes that he “guesses” the “pandemic is over,” presumably because the pro-abortion protester had put his face mere inches away from the reporter’s face.

The angered man turns around and decides to confront Hernandez again, once again almost nose to nose with the reporter.

“Yeah, I f***ing love killing babies,” replied the man in a raspier and deeper voice than he used before.

After Hernandez repeats back to the man what he has just said, the man calls Hernandez a “psycho” and swats at the person recording the incident, knocking the device.

READ: The end of Roe threatens a lifestyle, and that’s why pro-abortion backlash is so fierce

The video, which has since gone “viral” on social media, was accompanied by comments from Hernandez talking about the shocking encounter.

“An unhinged pro-abortion man aggressively gets in my face during a live interview in front of the Supreme Court and assaults the camera woman, Sav Hernandez,” the reporter stated.  He described the man’s actions as “demonic.”

The disturbing encounter caused a massive reaction among pro-lifers, with many agreeing with Hernandez that the man’s statement and the manner in which it was delivered seemed “demonic” in nature.

“Listen to the demon’s slithery speech…,” remarked Dr. Kelli Ward, the Chairwoman of the GOP in Arizona.