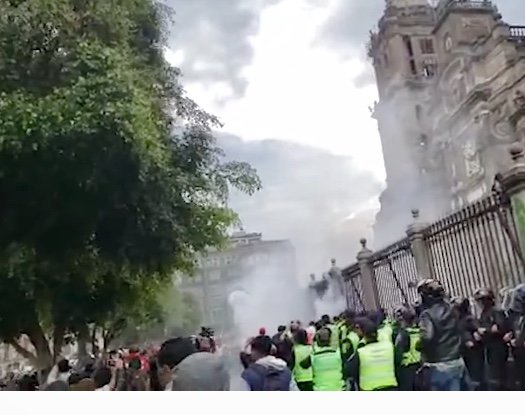 A gang of radical feminists attempted to set fire to the metropolitan Catholic cathedral in Mexico City.

MEXICO CITY, September 30, 2019 (LifeSiteNews) — In coordination with worldwide pro-abortion protests, a gang of radical feminists set fire to the metropolitan Catholic cathedral in Mexico City during a march on Saturday. They also smeared obscene graffiti on the church’s exterior walls and committed other acts of arson.

Resembling so-called antifa leftists in the United States, the black-clad hooligans painted slogans such as “My body,” “legal abortion,” and “God is a woman.” Some wore the green bandanas that have become the symbol of pro-abortion activists throughout Latin America.

When marchers set fires at the entrance gate of the cathedral, firefighters were able to extinguish the flames and prevent them from spreading. Police and members of Guardia Cristera Nacional, a group of Catholics who are dedicated to the Virgin of Guadalupe and are sworn to protect churches, formed a peaceful human cordon to prevent marchers from entering the historic church. They also gathered at other churches in the city to prevent arson and destruction.

The pro-abortion marchers, according to local reports, attacked bystanders on the street.

Seeing that the fire was not spreading at the cathedral, pro-abortion marchers retreated to the center of the Zocalo, the central plaza of the city, where they made a bonfire and continued to chant slogans demanding legal abortion.

Arsonists also set fire to the entrance of the offices of Mexico’s National Council of Merchants and Service Providers (CONACO) and the national Chamber of Commerce in the city center.

The largely female contingent of municipal police on hand were passive as the marchers smashed public property and set fires. Local media reported that marchers attacked Catholics, members of media recording the event, and police officers. The archbishop of Mexico is expecting an official report from civil authorities about the incident.

ACI Prensa reported that Mauricio Alfonso Guizar of Guardia Nacional Cristera said his organization sent out an appeal via social media to Catholics to come to the city center to pray and defend churches from planned attacks.

“Thanks to the reports on Catholic social networks, we were able to defend the churches, and the government sent public safety officers, having realized that churches are not a trifle,” he told the media outlet.

The riot in Mexico City came just days after the legislature of Oaxaca, a poverty-stricken state in southern Mexico, largely decriminalized abortion. While pro-life advocates shouted “Murderer! Murderer!” outside the state legislature on Wednesday, a majority of legislators voted to make Oaxaca the second jurisdiction after Mexico City to liberalize abortion law.

While the new law amends the state’s penal code, it is an apparent contradiction to the state’s constitution. Pro-abortion forces are expecting that the state constitution will be reformed next. The change in the penal code was passed by 24 of the 41 state legislators. A constitutional amendment, however, requires a vote of two-thirds of the chamber.

The “Green Wave” of pro-abortion advocates that began last year in Argentina was nearly successful in seeing pro-abortion law passed by Argentina’s national senate. All of the political parties currently fielding presidential candidates except one in the South American country support abortion.

In pro-abortion marches in Buenos Aires and other cities in Argentina, pro-abortion protesters have set fires, thrown stones, and launched physical attacks

The pro-abortion victory in Mexico is being heralded as a success for the movement that began in Argentina.

Archbishop Pedro Vázquez Villalobos of Oaxaca issued a statement that said that people of good will in his region “love life” and do not want laws that continue to deteriorate the respect for life.

“To make laws that promote the death of the unborn cause grave moral decay, deforms our values, do not defend the defenseless nor defend the weak, he said.

“We don’t want brother to kill brother, mother to kill a child, we want (laws) that put value on us,” the archbishop continued “ … We need laws that fight poverty, that support the countryside, and that suppress all forms of violence.”

Oaxaca is known not only for its material poverty but for its wealth of culture. At least a third of its citizens speak indigenous languages such as Mixtec and Zapotec, of which one-half do not speak Spanish. They are known for their colorful weavings and traditional culture.

Approximately 95 percent of Mexicans identity as Catholics, and Catholics in Brazil amount to about 86 percent of all Brazilians.

Cristeros were insurgents whose motto was “Viva Cristo Rey!” (Spanish for Long live Christ the King) and fought the armies of the government to a final stalemate.