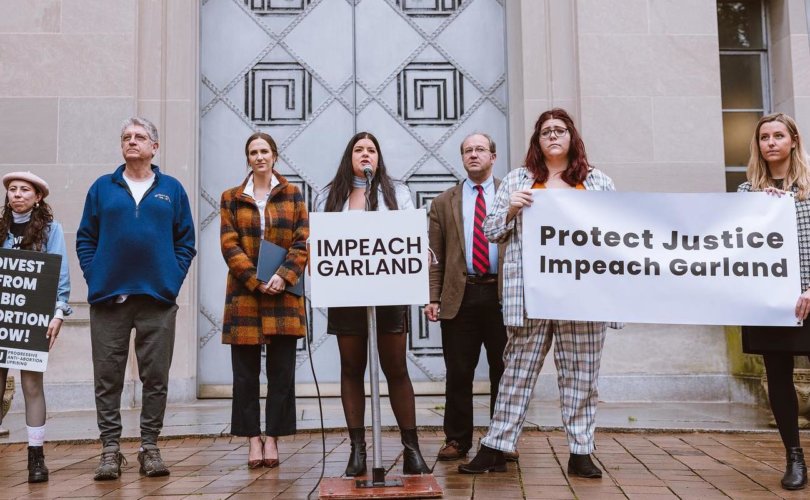 Pro-life activists stand in front of the U.S. Department of Justice on Wednesday  Photo courtesy of PAAU

WASHINGTON, D.C. (LifeSiteNews) — Pro-life activists stood in front of the U.S. Department of Justice (DOJ) on Wednesday and demanded that U.S. Attorney General Merrick Garland be removed from office for overseeing the weaponization of the Freedom of Access to Clinic Entrance Act (FACE Act) against peaceful pro-life Americans.

Their call to “Protect Justice! Impeach Garland!” comes as the powerful department Garland controls on behalf of the Biden administration continues to ramp up its harrowing intimidation tactics, recently going so far as using a swarm of FBI agents with guns drawn to terrorize a young family and to arrest an elderly female concentration camp survivor for daring to protest the murderous abortion industry.

Activists Terrisa Bukovinac and Lauren Handy of Progressive Anti-Abortion Uprising (PAAU) were joined by of Janae Stracke, Director of Grassroots for Heritage Action, Dr. Michael New of the Charlotte Lozier Institute, and Randall Terry of the Society for Truth and Justice and founder of Operation Rescue.

“The FACE Act was designed to crush a non-violent resistance that mobilized tens of thousands of people for direct action on behalf of the unborn,” she explained.

“This year, with the overturning of Roe v. Wade, many of us have been very hopeful that this archaic and unjust law would be dismantled,” she continued. “But instead, I have watched in horror as the U.S. Department of Justice has been weaponized to arrest peaceful, non-violent pro-life activists under the FACE Act.”

Bukovinac contrasted the DOJ’s outrageous use of force against pro-life activists with its inaction against violence targeting the pro-life community.

“We cannot allow this injustice to continue.  We are urging congress to impeach Garland.”

“How dare they break into a home, guns drawn on a man, with his children screaming.  This is obscene,” he exclaimed.

“Merrick Garland has betrayed his oath of office. He is not worthy to serve as the Attorney General, and the only question in front of us is whether or not the U.S. House and the U.S. Senate will do their job to rein him in and kick him out,” said Terry.

Terry explained that the FACE Act, which became law during the Clinton Administration, was designed as tool to isolate people of faith who wanted to defend the unborn. Not mincing words, he continued:

Under the rules of this law, Martin Luther King, Jr., and those who participated in lunch counter sit-ins would have gone to federal prison.

We call on the U.S. House and the U.S. Senate to rein this fool in, and to throw his sorry ass out!

Handy is facing up to 11 years in prison, three years of supervised release, and $350,000 in fines for leading a “traditional rescue” at a Washington, D.C., abortion mill in October 2020. This spring, the homes of both Handy and Bukovinac were raided after the they uncovered the remains of 113 unborn children, five of whom were deemed “extremely late term,” at the same abortion clinic.

“We were born for such a time as this and we will continue,” she added.