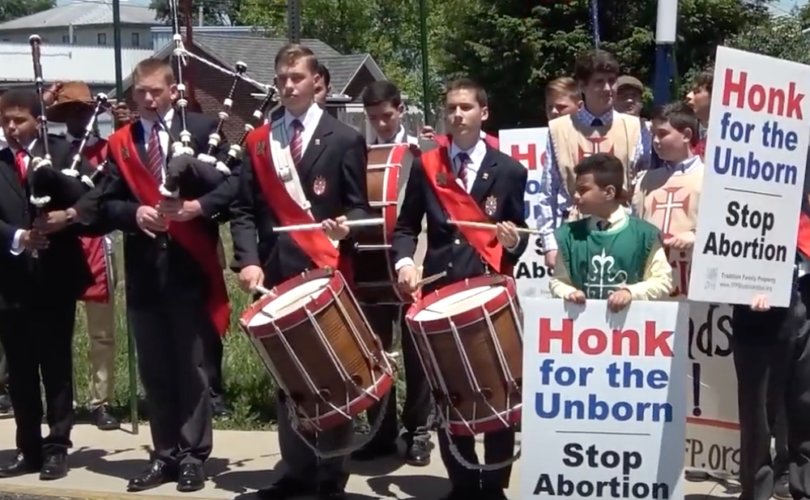 LEWISBURG, Pennsylvania (LifeSiteNews) — Catholic boys took time out from their camp to support the unborn and pray for the reversal of Roe v. Wade just weeks before the 1973 law was overturned.

As part of the June Call to Chivalry Camp operated by the American Society for the Defense of Tradition, Family, and Property (TFP Action), Catholic boys gathered on sidewalks in Herndon, Pennsylvania to demonstrate on behalf of the unborn.

The teens were led in shouts of “Viva Cristo Rey!” as they stood with signs reading, “Honk for the unborn,” and “Smile! You survived abortion.”

The boys were met with overwhelming support. One boy recalled that only six people were against the pro-life message while they received over three hundred honks supporting the unborn.

The group had a few interactions with pro-abortion advocates. One TFP volunteer asked a woman if she was pro-life, to which she promptly responded, “No!”

“Are you going to take all these children?” she screamed.

“The choice to kill an innocent baby is not a choice,” the volunteer responded. However, the woman refused to discuss her position, instead threatening to call the police for what she alleged was harassment.

“We prayed the Rosary earlier for the end of abortion,” one boy said.

The prayers of the young men were answered when the U.S. Supreme Court overturned Roe v. Wade in the historic decision Friday morning, ending nearly 50 years of nationwide abortion-on-demand and once again allowing states to protect unborn life as early as the moment of conception.

The reversal has resulted in many U.S. states outlawing abortion, largely owing to “trigger laws” set up in anticipation of the historic decision.

Ten states have totally banned abortions while many others have limited access. As LifeSiteNews reported, since Friday morning, clinics have ceased abortions in Alabama, Arizona, Arkansas, Kentucky, Missouri, Oklahoma, Texas, South Dakota, West Virginia, and Wisconsin. Abortions initially stopped in Utah and Louisiana but have resumed this week due to recent court orders.

Meanwhile, pro-life pregnancy centers and Catholic churches have faced violence, vandalism, and even arson in the wake of the pro-life ruling. The violence appears to have no clear end in sight, with the Department of Homeland Security predicting that terrorist attacks could continue “for weeks” after the Supreme Court’s overturn of Roe v. Wade.