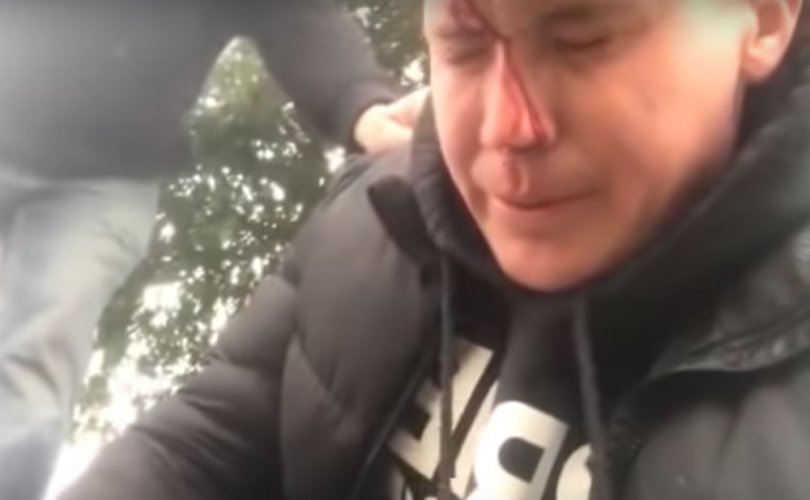 FORT WORTH, January 17, 2019 (LifeSiteNews) – Another peaceful pro-life activist found himself the target of pro-abortion violence recently, after a brief exchange with an irate man outside of a notorious Texas abortion facility.

The video dated January 11 shows pro-life activist and Abortion Clinic LIVE founder Ryan Roberts attempting to converse with a passerby outside of Whole Woman’s Health in Fort Worth. “I was assaulted outside of this abortion clinic after telling a man Jesus loved him,” Roberts says on Facebook. “But, what happened to the babies in that clinic was FAR WORSE and BLOODIER than what that man did to my face.”

Pointing out a sticker on the man’s truck that said “Christ the King,” Roberts told him, “this place kills babies, can we help you?” While stopped on the road outside the center, the man interacted with an apparent clinic escort who approached his vehicle while Roberts kept reiterating his message [WARNING: Video contains blood and sudden violence].

The driver can be heard saying “this guy’s crazy,” but then as he backed up, an unintelligible comment prompted Roberts to approach the vehicle, where the man asked him “do you want to die? You and your whole family?” Roberts incredulously asked “what are you talking about,” to which the man said, “you need to get going, bro.”

“Jesus loves you, man,” Roberts replied while backing the way, adding that he protests because “my mom almost aborted me” and making a few more innocuous pro-life comments. The truck backed into the intersection as the driver made more unintelligible comments, but the interaction appeared to be winding down until the truck stopped, a few more words were exchanged, and he got out.

He strode across the street, swinging his fists and punching Roberts in the head repeatedly despite being warned he was on video. The video then switches to focus on Roberts’ face as he leans over, stunned and dripping blood. He took some time to regain his composure, then got back up and resumed his pro-life witness.

“Yeah, I don’t blame him,” the man responded while exiting.

“Those of us who stand on the sidewalks of abortion clinics and who reach out on a regular basis go through a lot,” Pastor Mark Dickson of SovereignLOVE Church and Right To Life of East Texas, who witnessed the event, told Faithwire, adding that the man “was not there to drop off or pick up anyone. He just saw us on the sidewalk and decided to stop.”

Roberts himself told The Daily Wire that the police have identified the attacker but are currently investigating and have yet to make an arrest. He added that he suspects that the man was on drugs and was told by someone he had recently been released from a mental institution.

Roberts believes the man should be charged with a hate crime but doesn’t give him much thought. “I wish the story was about the teenage girl who walked out an hour before and decided to keep her baby and prayed with me,” he said. “It was never about me and the pain that I felt, it was about the probably 40 babies being murdered behind the brick wall.”

While the media frequently invokes rare stories about fringe pro-life activists murdering abortionists, violence from pro-abortion advocates is more common. In October a man exiting a Florida Planned Parenthood screamed at and then physically assaulted a 65-year-old pro-life protester, a college pro-abortion activist at Ryerson University in Toronto was caught on tape kicking pro-lifers that same month, and in September a male Toronto hair stylist was caught on tape roundhouse kicking a woman participating in the Toronto Life Chain.