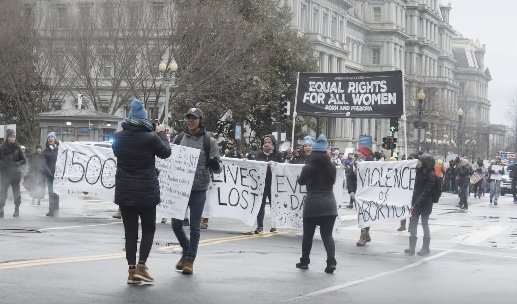 Students for Life of America crashed the Women's March in Washington on Saturday, Jan. 18.YouTube Screenshot

WASHINGTON, D.C., January 24, 2020 (LifeSiteNews) – Students for Life of America (SFLA) has produced a video showing them crashing the pro-abortion “Women’s March” last week in Washington D.C., and at one point leading the march with pro-life signs while chanting pro-life slogans.

The group arrived at the march with banners calling for “equal rights for all women — born and preborn” and chanted “abortion hurts women.”

Kate Maloney, SFLA northeast regional coordinator who attended the event and appears in the video, described the moment when the group crashed the Women’s March as “amazing.”

“We really stirred things up … so many times people think that Planned Parenthood or, NARAL or the abortion agenda is something that is pro-woman and I'm here to tell you and the pro-life generation is here to tell you that it is not,” Maloney said.

“Women don't need abortion to be liberated, or to be in a working world, or to be the same as men,” Maloney added. “That is insulting to me as a woman to think that abortion is somehow in any way a gift to me or to help me liberate myself. I would never want to liberate myself by decimating somebody else. That's not liberation, that's a lie. It's a lie that's been fed to women everywhere.”

SFLA president Kristan Hawkins said, “The Women’s March claims to stand for ‘ending violence’ yet supports the violence of abortion and ignores the convictions of more than half of all women who believe that women in the womb are important, too.”

SFLA executive vice president Tina Whittington, who attended the event, said, “The Women’s March is a dying organization with mixed messages and no clarion call. Their radical leftist message shows just how out of touch they are with the rest of the country. While today’s event showcased a mixed bag of issues, the majority of the marchers shared their support of a radical abortion agenda, with many saying that they were fine with abortion through all nine months of pregnancy.”

“Our students braved the cold to make sure that the one point of view not represented at the March would be heard – a voice speaking up for the 1,500 baby girls who are lost each day to the violence of abortion,” Whittington added. “If we want equal rights for women, we cannot forget the most vulnerable, those still in the womb.”