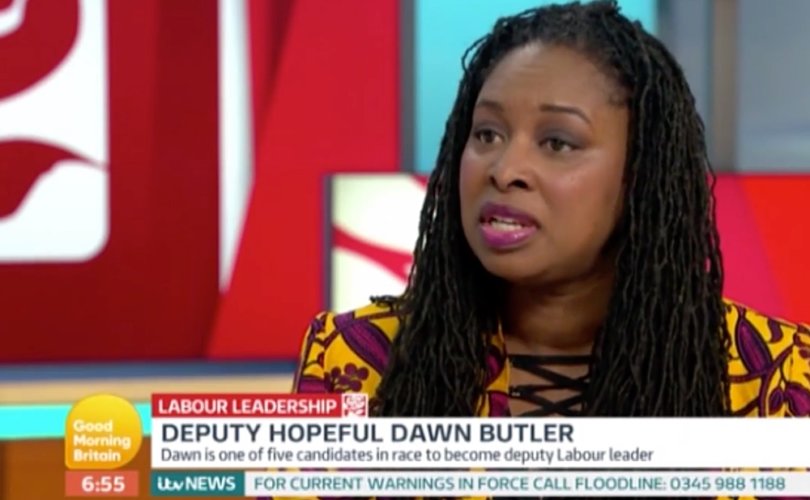 UNITED KINGDOM, February 18, 2020 (LifeSiteNews) – A British politician has claimed on national television that children are “born without sex.”

Dawn Butler, a Labour Party MP and Shadow Secretary of State for Women and Equalities, made the comment yesterday on the popular morning TV show Good Morning Britain (GMB) while discussing transgender issues.

GMB presenter Richard Madeley asked Butler: “Do you think somebody that embraces transgender but nevertheless decides that there is a biological difference based on chromosomes, based on a penis that may not have been removed after surgery, are you saying that you think that person is transphobic?”

Butler replied: “If you’re saying that a trans woman isn’t a woman then there are issues around that.”

“Talking about penises and vaginas doesn’t help the conversation because what you’re saying then is a trans woman isn’t a woman by your own definition,” she added.

Moments later in the interview Madeley said: “Look when a child is born they are identified and observed in a particular way.”

Butler replied: “A child is born without sex, a child is formed without sex in the beginning.”

Butler is currently campaigning to become deputy leader of the Labour Party. She is one of several high-ranking members of the party, including leadership hopeful Rebecca Long-Bailey, who has signed a “trans-rights” pledge which commits them to supporting the expulsion from the party anyone who holds so-called “transphobic” views.

The pledge and its support from Labour leaders has been criticised for describing groups, such as Woman’s Place UK, as “trans-exclusionist hate groups” because of their support for women-only spaces for services such as toilets and domestic violence refuges.

Well-known GMB host Piers Morgan, who says he supports “transgender rights,” responded to the interview on Twitter by simply posting the word “Insane.”

I was born with a penis. That makes me male.

My sisters were born with a vagina. That makes them female.

“It seems Dawn needs some SRE lessons. I was born with a penis. That makes me male. My sisters were born with a vagina. That makes them female. Happy to help,” Dale wrote.