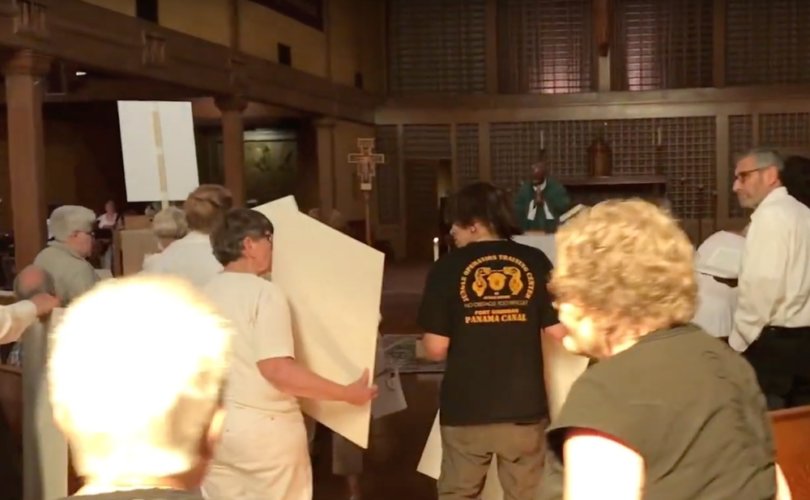 PORTLAND, Oregon, August 15, 2019 (LifeSiteNews) – So-called “progressive” worshippers at a Catholic parish in Portland, Oregon, shouted down an African priest celebrating Mass who had tried to bring his congregation more in line with Catholic teaching.

Fr. George Kuforiji, a native of Nigeria, was just commencing the celebration of the Mass on June 20 at St. Francis of Assisi parish when he was interrupted by elderly parishioners wearing white and bearing protest signs. The loud, grey-haired protesters filed into the central aisle and marched forward while Fr. Kuforiji tried to continue the celebration from behind the altar. Some banged tambourines or shook rattles in the church.

An amateur video recorded parishioner Melissa Pittman, who held a large photograph above her head that she displayed to the congregation as she protested: “We are following the voice of Jesus, of love. Jesus of inclusion. Jesus of resisting the authorities because when we resist the law, we are in the Spirit of God.” At least one member responded with an “Amen!”

Pittman then went to the pulpit to air grievances against Archbishop Alexander Sample and Fr. Kuforiji. “I have asked Father for dialogue; I said that for the last year,” she said. “We have been wanting real dialogue. I said that we are being abused.” Continuing her harangue, Pittman said, “We are being abused in the Catholic Church by this priest and by this archbishop.”

The video also shows that one man responded to Pittman with a “boo.” He then gestured to Fr. Kuforiji, who had retired to the back of the church, and said, “This is a holy priest.” However, the protesters shouted him down.

The video showed several of the mostly female parishioners confronting Fr. Kuforiji at the back of the church. One woman approached him and said, “How can you be a priest? I've been here for over 15 years. You've been here a year.”

Fr. Kuforiji responded: “Do you have reverence for God?” as the woman turned her back on him in apparent disgust. Finally, the protesters ended their disruption of the liturgy by locking arms and singing the Civil Rights-era anthem, “We Shall Overcome.”

According to a report in The Oregonian, members of the parish council and other parishioners questioned Fr. Kuforiji’s leadership and reforms. One of his innovations was to ban “inclusive language” in Scriptural readings used in the parished. His predecessors had avoided references to God as “Lord,” “king,” or “he.” Other reforms that Fr. Kuforiji introduced when he took over the parish in 2018 was to remove a hand-woven Guatemalan cloth that had been used on the altar, replacing it with a plain white altar cloth as prescribed for use in the Catholic Church.

Fr. Kuforiji also removed photographs of supposed homeless people that had decorated the interior walls of the church. He had discarded some of the photographs, as well as vestments that previous priests had used, into a trailer.

Among the items discarded was a cloth decorated with rainbow colors.

St. Francis is one of the oldest churches in Portland. It has long been known as a bastion of progressive Catholic faith.

Parishioners have marched in the Portland Pride parade, fed and given shelter to people experiencing homelessness and worked to make the traditionally patriarchal institution more inclusive of women. For several years, a banner hung above the church steps that read “Immigrants & refugees welcome.

Now, the banner is missing. Vestments and one of several treasured photographs of the homeless community that had lined the walls of their parish had been piled in a trailer headed for the dump.

Many felt the new priest aimed to better align St. Francis with the archdiocese, who some feel is out of step with Catholics in Portland.

Archbishop Alexander Sample is a native of Montana, who also happens to be a metallurgical engineer. After serving as bishop of Marquette, Michigan, Sample was appointed archbishop of Portland by Pope Benedict XVI in 2013. In 2007, he delivered the homily at the Red Mass at the Cathedral Basilica of St. Louis, Missouri, at the invitation of Cardinal Raymond Burke. In a recent radio interview, Cardinal Burke mentioned that he is especially close to Archbishop Sample. The archbishop is also known for having criticized Notre Dame University for granting an honorary doctorate to President Barack Obama, because of the latter’s abortion policy.

Counted as a traditionalist by some, Archbishop Sample decreed in 2017 that sexually-active homosexuals as well as divorced-and-civilly-remarried Catholics should not receive the Holy Eucharist, saying that they must first “sacramentally confess all serious sins with a firm purpose to change.” In 2018, he ruled that all attending Mass will kneel during the recitation of the “Agnus Dei” or Lamb of God prayer in anticipation of receiving Holy Communion.