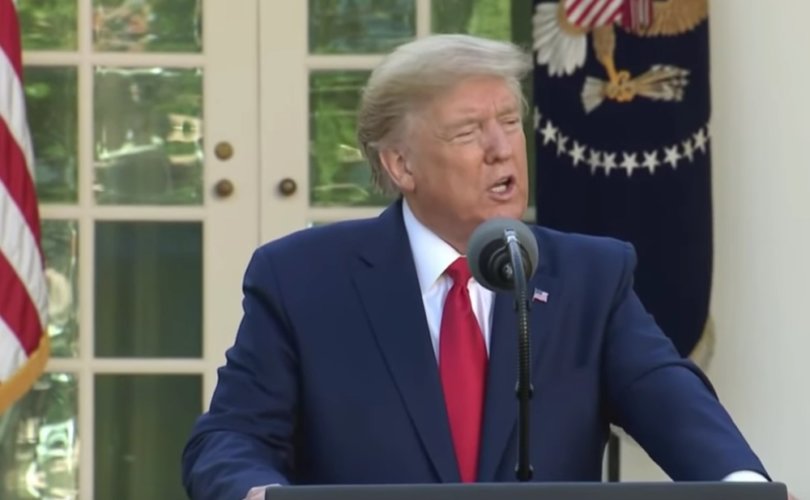 In a question to President Donald Trump, the OAN reporter asked Trump whether he agreed with the decision of Texas and Ohio to suspend elective abortions in order to make more resources available to coronavirus cases.

“405 Americans have died from coronavirus in the last 60 days,” the reporter began. “Meanwhile you have 2,369 children who are killed by their mothers through elective abortions each day. That's sixteen and a half thousand children killed every week. Two states have suspended elective abortion to make more resources available for coronavirus cases – that's Texas and Ohio. Do you agree with states who are placing coronavirus victims above elective abortions, and should more states be doing the same?”

Trump refrained from commenting on whether he not he agreed with the actions taken in Texas and Ohio. He replied, “what you're mentioning [abortion] has been going on for a long time and it's a sad event, a lot of sad events in this country,” before switching the focus back to his administration’s effort to combat the coronavirus.

Pro-lifers won a victory today when the U.S. Fifth Circuit Court of Appeals today temporarily stayed a federal judge’s injunction against the Texas governor’s order halting abortions during the pandemic.

According to a report last week in the New York Times, the press conferences have an average audience of 8.5 million viewers on cable news, in addition to those viewing the conferences online. LifeSiteNews has begun live-streaming these conferences. Interested readers can learn more HERE.

Pro-life activists have previously praised Trump for being the “most pro-life president in history.” He has appointed conservative, pro-life judges to various courts; stopped taxpayer dollars from funding abortion abroad; defunded the United Nations Population Fund, which cooperates with China’s forced abortion regime; signed a law allowing states to defund America’s largest abortion corportation, Planned Parenthood; and cut around $60 million from Planned Parenthood. In January Trump became the first president to attend the March for Life in Washington.

Earlier this month pro-life doctors in the United States told LifeSite that continuing abortions during a pandemic is “medically irresponsible.”

The American Association of Prolife OB/GYNs (AAPLOG) told LifeSiteNews that “abortions offer zero health benefits to women and do not treat a disease process” and issued a call for “abortions to be suspended according to the current recommendations pertaining to elective procedures and office visits.”