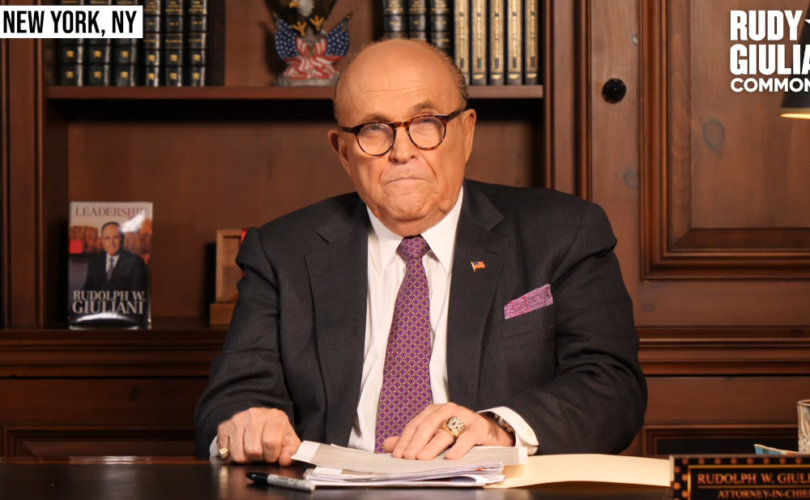 October 31, 2020 (LifeSiteNews) — Former New York Mayor Rudy Giuliani has released another deep-dive video on the contents of Hunter Biden’s laptop, this time focusing on exactly how the family of former Vice President and current Democrat presidential nominee Joe Biden made millions of dollars in dealing with business interests linked to Communist China.

Giuliani, who is now the personal attorney of President Donald Trump, is the one who brought the laptop to the New York Post’s attention in October, and has released multiple videos about the emails and texts it contained.

“There are two main transactions with China. One we’ve been through many times, and that’s the one in which Joe Biden brings Hunter Biden to China with him,” Giuliani says in the October 28 video. “Joe is supposed to get us relief from tariffs and Joe is supposed to get China to back off the island they had militarized that they dispute with Japan. Joe failed miserably in doing that, but Hunter got a one-billion-dollar commitment from China, from the Bank of China, about eight days later, and the Bank of China became a partner in his fund called Bohai Harvest.”

“But then when he left the vice presidency … the Chinese wanted to really wrap him up,” he continues, citing numerous letters confirming that references to “number one,” “the chairman,” and “the big guy” in these exchanges were meant and understood to mean Joe Biden himself. In an April 18, 2017 letter addressed to Joe Biden’s brother James, a representative of CEFC China Energy Corp. refers to the Biden family’s support as “the base of CEFC’s further development.”

“Here’s a letter from James Gillier, who is one of the partners in the company that they’re going to form with the Chinese Communists, and he points out to [Joe’s brother] Jim Biden that he wants to make sure, he says, ‘I have asked Joe to look over the documents just so you understand that Joe is a material part of this,’ which is completely contrary to his eight-year lie that he had no involvement in these foreign businesses. ‘I have asked Joe to look over the doc just in case.’”

One communication dated May 19, 2017 indicates that the players were cognizant of the impropriety involved, based on a plea: “Don’t mention Joe being involved. It’s only when you are face to face. I know that, but they are paranoid.”

A July 26, 2017 document, Giuliani says, shows that CEFC “proposed at first a $5 billion interest-free loan to the Biden family based on their trust in the Biden family,” which was followed by “an actual transfer of $4.8 million of it on August 8, 2017. And according to the 10 percent document, that would entitle Joe to a minimum of $480,000 when that transfer was made.”

In an exchange with his daughter Naomi two years later, Hunter reportedly claims he “pa[id] for everything for this entire family for 30 years. It’s really hard, but don’t worry; unlike Pop I won’t make you give me half your salary.”

“There’s the formula,” Giuliani concludes. “The money doesn’t go directly to Joe; the money goes to Hunter or it goes to James or it goes to Sarah. Half of it ultimately goes to Joe; whether directly or indirectly it goes to Joe or it’s in Joe’s name, and that’s how Joe was able to buy five houses on the salary of a senator.”

Biden allies in the mainstream media as well as Democrats such as House Intelligence Committee Chairman Adam Schiff (D-CA) have claimed the information is part of a foreign intelligence operation to influence the impending presidential election, a contention for which Director of National Intelligence John Ratcliffe says no evidence exists.

The mainstream media also extensively promoted a letter signed by more than 50 former intelligence officials claiming the story “has all the classic earmarks of a Russian information operation,” but the same letter admitted they had no actual evidence that it was.

While the Biden campaign has denied impropriety on the candidate’s part, they have not denied that the emails themselves are real, with even campaign spokeswoman Jenna Arnold admitting, “I don’t think anybody’s saying that they are inauthentic or not.” Hunter Biden’s former business partner Tony Bobulinski has gone public to corroborate the communications to which he was a party.