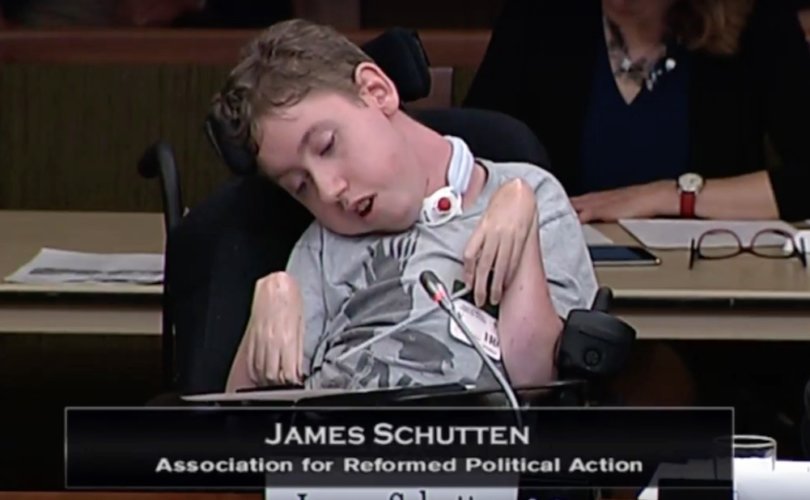 ‘I’ve gone to the hospital because of illness, and medical staff questioned whether extreme measures were worth it,' James Schutten told a Parliamentary committee.

OTTAWA, May 10, 2016 (LifeSiteNews) — Twenty-one-year-old James Schutten volunteers at a nursing home a few days a week and helps out at an elementary school.

But he also requires “someone to set up my feeding tube, suction my trach, turn me over in bed, take me to the bathroom, and scratch my head,” he told the House of Commons justice committee last week.

“I’m not telling you this to make you feel sorry for me. I don’t feel sorry for myself,” added Schutten, who at age two was diagnosed with spinal muscular atrophy, a degenerative neuromuscular disorder that affects motor muscles and weakens the respiratory system.

“But you need to know that these professionals and family members need to care about my life and whether I live or die.”

The bill is intended to amend the Criminal Code to conform with the Supreme Court’s February 2015 Carter decision, which struck down the prohibition against assisted suicide and euthanasia as unconstitutional, and takes effect June 6.

Schutten, who voiced his worries about Bill C-14 on behalf of the Association of Reformed Political Action Canada (ARPA), said that he’s “gone to the hospital because of illness, and medical staff questioned whether extreme measures were worth it.”

“With this right to die, it makes me feel like society thinks I should choose to die.”

“This makes me very nervous because I feel like I’m not worth the trouble. Thankfully, my family has my back to speak with the doctors on my behalf,” he said.

“I have anxiety now. How much more if Bill C-14 comes into effect?”

Schutten asked the committee to amend Bill C-14 to require “that palliative care is meaningfully made available to the patient.”

“I’m one of those people who the Supreme Court of Canada thinks should have this right to doctor-assisted death,” he noted. And “with this right to die, it makes me feel like society thinks I should choose to die.”

“But what if instead I had the right to palliative care or resources to help me continue to be a productive member of society?” he asked.

“What if society started from the perspective that I do have value? What if people didn’t view me as a burden for others to carry?” Schutten added.

“Look past my wheelchair and see that I am an asset in my community.”

Schutten has been volunteering at his brother’s elementary school since 2014, and at a nursing home in Ancaster since last September, at the invitation of a friend who works there.

“I really enjoy it,” he told LifeSiteNews in an email. “I found that because I’m in a wheelchair the elderly felt they were helping me, not vice versa. An example would be when they play bingo, they all want to help ME with my bingo card.”

Or people will “think they are pushing me to activity but actually I am just driving slow in my power chair,” related Schutten, a member of the Ancaster Canadian Reformed Church.

“In a crazy way I have purpose, and I give them purpose.”

Pieter Harsevoort, who was diagnosed with spinal muscular atrophy on his first birthday, also spoke to the committee May 3 along with James, and friend André Schutten, ARPA Canada’s director of law and policy and general legal counsel.

Harsevoort, aged 32, told LifeSiteNews in an email that “since Bill C-14 will affect my future I was happy to accept André’s invitation to voice my concerns.”

He added: “In general, I’m concerned with the way the ruling devalues the lives of the disabled and aged, and how any legalization of euthanasia leads to abuse of the most vulnerable members of society.”

A special-ed teacher at a Hamilton Christian school, who described himself on a past blog as “a crooked man on a straight path,” Harsevoort told the committee that Bill C-14 lacks “precision in language” and is “dangerously dependent on euphemisms.”

“I urge you to please use accurate terminology so that termination of life is not confused with palliative medicine,” he said, noting that the bill requires amendments “to ensure that physicians don’t approve euthanasia for vulnerable persons like James and myself in moments of weakness.”

Bill C-14 allows euthanasia or assisted suicide for competent adults who have a grievous and incurable illness, disease or disability which causes them enduring physical or psychological suffering that is intolerable to them and cannot be relieved under conditions they consider acceptable, who are in an advanced state of irreversible decline, and whose natural death is reasonably foreseeable.

“The reality is that intolerable suffering is relative,” Harsevoort told the committee. “Suffering is modified by many diverse factors.”

He recommended the bill be amended to require the euthanasia and assisted suicide be approved on “reasonable proof” the person meets the eligibility criteria rather than “mere opinion” they do, and eligibility based on a “specific prognosis” rather than on “reasonably foreseeable death.”

And the bill should include specific oversight to ensure people can revoke their request, he told the committee.

While these amendments to the bill  “will improve the situation for the disabled and ill,” Harsevoort said, the “only true protection of the sanctity of life is a ban on euthanasia.”

“Instead of investing money into a bill which normalizes the choice of death, our country should invest time and money into giving people with illness, disabilities, and old age a will to live,” Schutten observed earlier.

“I don’t believe that anyone has the right to choose exactly when to die, but God alone decides,” he told the committee.

“And He does not make mistakes. He has a purpose for everything.”