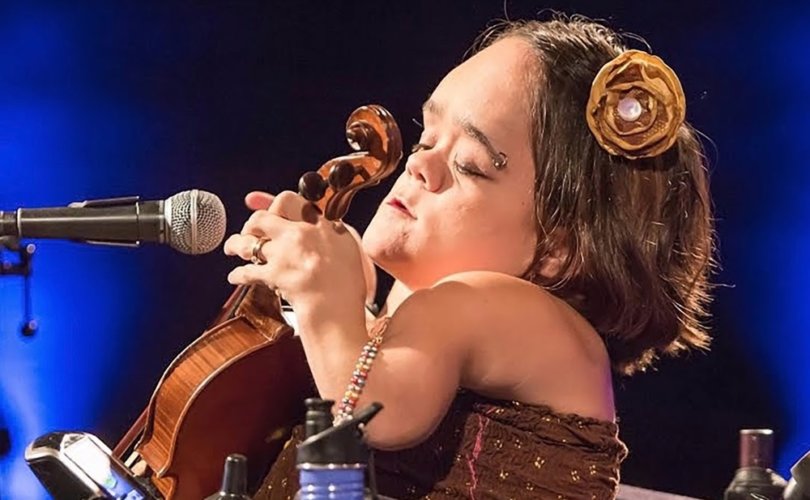 DULUTH, Minnesota, September 18, 2017 (LifeSiteNews) — A severely handicapped woman has a musical message to society that the lives of the disabled are valuable.

Prize-winning violinist Gaelynn Lea was born with Osteogenesis imperfecta, a fancy term for extremely brittle bones.  It's a genetic disorder which causes the bones to be so light that babies are born with broken bones.

“Before I was born, I broke about 50 bones in utero,” Gaelynn explained.  “The doctors didn't know that I had brittle bones disease, so by the time I was born (my broken bones) had all healed kind of differently. So my arms and legs are bent.”

The determined and intelligent Gaelynn has been enthralled with music since the fourth grade.  “I really wanted to play the cello at the beginning, (but) luckily I had a teacher that was willing to help me,” she said.

That teacher willing to go the extra mile to help Gaelynn made a lifelong difference.

Gaelynn was just too small to reach the cello strings, so she turned to the violin.  Still, her disfigured arms were too short.

So they tried unconventional means to play the instrument.  “We came up with this idea that I could play up and down (vertically), in the way that a cello plays.”

Gaelynn developed a technique for violin by holding the bow “like a baseball bat” with the violin attached to her foot so it wouldn't slip when she played.

“We had to adapt the bow hold so I hold it like (an upright acoustic) bass player,” she adds.

Gaelynn's unique way of playing the violin gives her a unique sound.  “It kind of sounds like an orchestra,” she explained.

Gaelynn plays classical, Celtic and traditional folk music.  She uses electronics to “loop” each line of a composition and gain the effect of multiple instruments playing at once.

Last year, she won National Public Radio's Tiny Desk Contest, and since then she has become a sought-after speaker and performer.  She speaks on disabilities, finding inner freedom, and the power of music.

Many consider her philosophy instructive not only for those with disabilities but for those without handicaps.  “I don't think I really thought about my disability in a negative way, really,” she shared.  “As a kid, it was just like an exciting challenge.”

“I don't see my disability as a negative part of my life,” she shared, “because if I didn't have a disability, I know for sure that I wouldn't be talking to you right now.”

She doesn't want to be pitied.  “When you call someone 'inspirational,' that's coming from a place of pity,” she says, “because secretly you feel like, 'I don't know how I could do it.'”

She says true freedom is found in accepting your limitations.  “A lot of times, people ask how did I overcome my disability,” she says.  “I'm never going to 'overcome' my disability because my disability is part of who I am.”

She advocates for acceptance of those with disabilities and argues against government or the medical profession trying to eliminate genetic disabilities.  “You can't 'eradicate' disabilities,” she explained.  “The idea of genetic testing and (aborting) babies out preterm, it's sort of saying, 'You obviously don't, on some level, think of my life as valuable.”

Gaelynn hopes to change the way people view others with disabilities.  “I think we have such an ingrained belief that able-bodied living is better than living in a body that is different.”

Gaelynn says she wants to influence people to love their bodies exactly as they are.  “The way your body is, is the way you experience the world and it makes a lot of decisions for you.  Your life unfolds in a very particular way because of the body you were born in.”