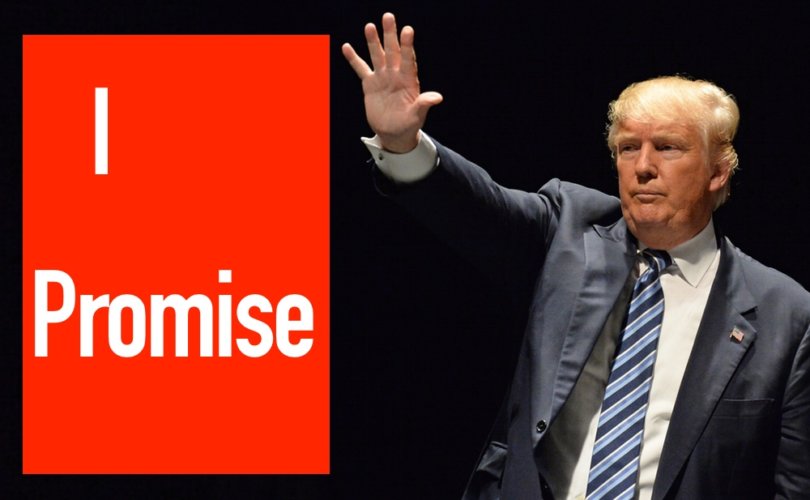 January 20, 2017 (LifeSiteNews) — President Donald Trump in his inaugural address spoke of the “new vision [that] will govern our land,” promising that the “time for empty talk is over” and that “now arrives the hour of action.”

While he did not specifically mention moral issues like abortion and same-sex “marriage” in his address, the “new vision” he laid out in the campaign included key promises on those issues.

Here is a list of the top life-and-family promises Trump made while on the campaign trail.

When pro-life and pro-family Justice Antonin Scalia died last February, opening a vacancy in the Supreme Court, Trump promised on numerous occasions that if he were elected he would appoint pro-life justices to the bench.

When Trump was asked in the final presidential debate if he wanted the court to overturn the 1973 abortion decision Roe v. Wade, he said that it would happen “automatically” because of his appointments.

“Well, if we put another two or perhaps three justice on, that's really what's going to be,­­ that will happen. And that'll happen automatically, in my opinion, because I am putting pro-life justices on the court,” he said.

Trump confirmed in an Oct. 27, 2016 interview with EWTN that he was going to appoint judges who are pro-life:

EWTN: “You weren’t always pro-life, but you now are determinedly and decidedly pro-life.”

EWTN: “You said you are going to appoint judges who are pro-life.”

After a 2015 video investigation uncovered evidence of Planned Parenthood's involvement in the illegal sale of aborted baby body parts, Trump promised on various occasions that if elected, he would defund the abortion giant.

When asked during a Sept. 14, 2015 'O’Reilly Factor’ interview if he would vote to defund Planned Parenthood, Trump said yes.

Replied Trump: “Yes, I’ve seen it, and I think you know my stance on it. I’ve said it before, but…I’ve seen the videos. I think it’s a disgrace, and the answer is I would vote to defund.”

When asked again in an Oct. 18, 2015 Fox News Sunday interview if he would be willing to defund Planned Parenthood, he also replied in the affirmative because of what he called the “terrible” things going on there.

“Planned Parenthood should absolutely be defunded. I mean if you look at what's going on with that, it's terrible,” he said.

3. Trump promises Christians can 'trust' him to defend 'traditional marriage’

Christians were dismayed in 2015 when the Supreme Court ruled in its 2015 Obergefell decision that two people of the same sex could ‘marry’ one another. While Trump has wavered in his position on the ruling, at one point calling it “settled law,” he has also promised Christians that they can “trust him” to defend traditional marriage.

During a Jan. 31 Fox News Sunday interview Trump stated that if he were to become president he would “strongly consider” appointing justices to overrule the decision on same-sex “marriage.”

When asked during a Feb. 2, 2016 CBN interview his reaction to being called the “most pro-gay republican presidential candidate that we have out there,” Trump replied, “I think [Christians] can trust me.”

He added: “They can trust me on traditional marriage. I was very much in favor of having the court rule that it goes to states and let the states decide. And that [Supreme Court ruling] was a shocking decision for you and for me and for a lot of other people.”

During his Sept. 9, 2016 speech at the Value Voters Summit, Trump promised to “protect and defend” religious liberty.

Donald Trump promised that if elected president, he would repeal the 1954 Johnson amendment. That law bans charities and churches that have tax-exempt status from engaging in “political campaign activity.” Pro-life and pro-family leaders say the law stops them from communicating their message and fully serving as leaders in the pulpit.

“All religious leaders should be able to freely express their thoughts and feelings on religious matters. And I will repeal the Johnson amendment if I am elected your president, I promise. So important,” he added.

Trump called Obamacare “disastrous” and promised to repeal it.

“We’re also going to repeal and replace disastrous Obamacare which gives the government control over the lives of everyday citizens…It is a disaster. It’s a disaster, and everybody knows it. And it’s going to die of its own weight anyway, but we’re going to get rid of it and we’re going to replace it with some great, great alternatives – much better health care at a much lower price,” he said.

‘We’re going to have real progress’

Priests for Life National Director Father Frank Pavone stated in a recent interview with LifeSiteNews that the pro-life cause will “make significant progress” under a Donald Trump presidency.

Pavone said that members of the pro-life movement should look at the Trump administration with a “we,” not an “us-them,” mentality.

“It’s not just about promises that [he and his team] made. It’s about a common commitment that we have along with them,” he explained. “We each have responsibilities: the elected and those they serve, to carry out our common commitment to defend life, freedom, family, and America. So we need to be working alongside” each other.”

Pavone urged people fighting to defend life and family to continue to pray and act.

“We’re going to have real progress,” Pavone predicted. “This was a real victory and it’s going to lead to real results.”