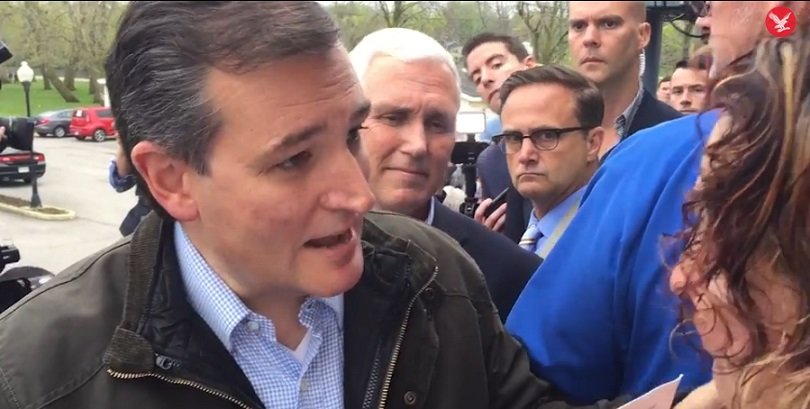 MARION, Indiana, May 3, 2016 (LifeSiteNews) – Senator Ted Cruz was met on the campaign trail by a mother who strongly opposed a state pro-life law that would have protected children with birth conditions – like her own.

Andrea DeBruler, a 41-year-old nurse, confronted the presidential hopeful in the city of Marion as Cruz campaigned with Gov. Mike Pence.

DeBruler first asked Cruz, then Pence, about House Bill 1337, which bans abortions performed due to the child's race, sex, or disability, such as Down syndome.

DeBruler held up a picture of her daughter, Jania, who was born with cerebral palsy. “This was a choice,” she said.

She asked Sen. Cruz if he supported the bill, which made Indiana the second state in the nation to ban abortion for Down syndrome, after North Dakota.

“I'm not Governor Pence,” he replied. “But I'll tell you this: I believe in protecting human life.”

Pence, who endorsed Cruz in today's make-or-break Indiana primary, listened to her objections.

After hearing that she felt many families lacked sufficient resources to care for children, especially in an area like Marion, Gov. Pence offered to connect her with social services.

“God bless her,” he said, looking at Jania's picture, “and God bless you.”

Though it may be unusual to encounter a woman arguing for the right to abort her own child, the governor handled it calmly. Pence had specifically reflected on “precious moments” he spent with “families of children with disabilities, especially those raising children with Down syndrome” when he signed the bill into law in March.

“We are truly thankful for the passage of this historic legislation by the Indiana House and applaud the new civil rights protections this bill creates for unborn children, as well as the new provisions this bill establishes for the humane final disposition of aborted babies,” Indiana Right to Life President Mike Fichter said at the time.

DeBruler told the UK media outlet The Independent that H.B. 1337 “means you can no longer have an abortion based on deformity. I’m against this law, because I think it should be a woman’s choice” to abort for any reason.

Congressional Democrats made similar statements during hearings last month for Rep. Trent Franks' federal Prenatal Nondiscrimination Act (PRENDA), with Congressman John Conyers saying the bill is “patently unconstitutional,” because a woman has the right to abort a child before viability for any reason.

Both leading contenders for the Democratic nomination expressed their displeasure with the law, which protects unborn children from racial or sexual discrimination, as well as discrimination on the basis of an inborn trait like mental capacity.

The decision to have an abortion is for a woman to make, not the Governor of Indiana. https://t.co/1VOroXS2br

Hillary Clinton later said, “I commend the women of this state, young and old, for standing up against this governor and this legislature.”

DeBruler told The Independent, despite her comment about not being a Democrat or a Republican, she is in fact a Democrat and will vote for Hillary Clinton in today's primary.

Allowing abortion because of Down syndrome isn’t a ‘slippery slope’: it’s rock bottom

Wife tells husband to choose between giving up baby with Down syndrome, or divorce: he chose the baby

‘I’m one of the 10%’: This actor with Down syndrome is grateful he wasn’t aborted (VIDEO)