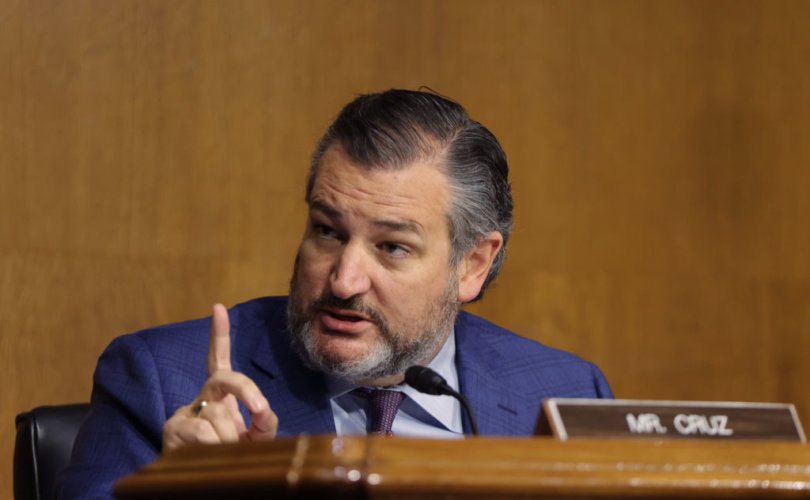 WASHINGTON (LifeSiteNews) — Republican Sen. Ted Cruz of Texas blasted Biden-appointed Attorney General Merrick Garland in a Judiciary Committee hearing Wednesday, accusing the AG of bowing to pressure from a special interest group to use the FBI to investigate parents protesting at school board meetings for alleged “domestic terrorism.”

Cruz also accused Garland of a potential conflict of interest, noting that radical racial ideology is a major flashpoint for school board disagreement, and Garland’s son-in-law co-founded an education company which allegedly supports the teaching of so-called “Critical Race Theory.”

Sen. Cruz began his questioning of AG Garland by stating that the Department of Justice under the Obama administration had been “politicized and weaponized,” and that in his confirmation hearing in February Garland “promised things would be different” under his leadership.

“That was your promise just a few months ago. I’m sorry to say you have broken that promise,” Cruz said.

Backing up his claim, the Texas senator spoke about the controversial September 29 letter penned by the National School Board Association (NSBA) which suggested that concerned parents protesting radical school policies were engaging in “a form of domestic terrorism.”

Cruz said the NSBA letter asked “the president to use the Department of Justice to target parents that were upset at Critical Race Theory, that were upset at mask mandates in schools, to target them as domestic terrorists,” and argued that Garland mobilized the FBI based on that request.

“The letter was in repeated consultation with the White House, in explicit political consultation with the White House,” he said. “Five days later, on Monday, so right after the weekend, boom, you pop out a memo giving them exactly what they want. Now, by the way, I understand that, in politics, that happens all the time. An important special interest wants something, sir, yes, sir. We’re going to listen to him.”

The memo mentioned by Cruz was issued by Garland on October 4 and announced a move to use the FBI and the U.S. Attorney’s Offices to investigate alleged threats of violence made by parents and set up “dedicated lines of communication for threat reporting, assessment and response by law enforcement.”

Last week, General Merrick Garland admitted to Republican Rep. Jim Jordan of Ohio that he mobilized the federal law enforcement power of the Department of Justice to launch an investigation into parents based upon having “read the letter” from the NSBA along with reports “in the newspapers.”

“Let me ask you something, General Garland,” Cruz continued. “In the letter, which you told the House of Representatives was the basis for this abusive memo targeting parents, how many incidents are cited in that memo?”

“I have to look back through the memo,” Garland began.

“You don’t know,” Cruz repeated. “And there’s a reason you don’t know. Because you didn’t care and nobody in your office cared to find out.”

Merrick Garland got *wrecked* at the Senate hearing today.🔻https://t.co/EUpFoU1EOR

Cruz said he “did a quick count just sitting here during this hearing,” counting 20 incidents cited in the NSBA letter of which at least 15 were non-violent.

“They’re not threats of violence; they’re parents who are unhappy. Yet, miraculously, when you write a memo, the opening line of your memo, ‘In recent months, there has been a disturbing spike in harassment, intimidation and threats of violence.’ You know what? You didn’t look, and nobody on your staff looked.”

When Garland said he did not know the answer, Cruz responded: “You’re the Attorney General of the United States. This was not a tweet you sent. This is a memo to the Federal Bureau of Investigation saying, go investigate parents as domestic terrorists.”

In the heated back-and-forth that followed, Cruz repeatedly accused Garland of acting as a political ally of the Biden administration and the NSBA to investigate parents without doing “independent research” into the veracity of the allegations, while Garland argued his memo did not label parents as “domestic terrorists” and instead was aimed at assessing “whether there is a problem out there.”

The Texas senator then spoke about sexual assault that occurred in a Loudoun County Virginia public school bathroom, in which a teenage girl was violently raped by a boy who wore a skirt and occasionally used the girls’ bathroom.

Using an opposite-sex bathroom is permitted by the school district’s trangender policy but vehemently opposed by many parents.

The father of the girl who was the victim of the rape became upset at a school board meeting when members claimed there was no record of assaults taking place in school bathrooms. The incident resulted in his arrest and forcible removal from the venue.

Until the news broke that the man’s daughter had been assaulted and the school covered it up, the father had been held up as an example of violent behavior from parents.

“This week, the court concluded that a 14-year-old girl was violently raped by a boy wearing a skirt in the girls’ restroom. The school district covered it up, released the boy, sent him to another school where he violently raped another girl,” Cruz said to Garland.

“Absolutely. And any expressions of upset are completely protected by the First Amendment,” Garland answered.

“Except you just called him a domestic terrorist,” Cruz said.

When Garland denied the allegation, Cruz persisted, “This letter calls him a domestic terrorist.”

“You base the direction to the FBI, an official direction from the attorney general on this letter,” he continued. “And I’ll tell you what, the NSBA is so embarrassed of this letter, they’ve apologized for it and retracted it, but you don’t apparently have the same willingness to apologize and retract what you did.”

In a message sent to its member organizations last week, the NSBA apologized for its letter asking for FBI assistance, saying “there was no justification for some of the language.”

Cruz ended the session by pressing Garland on a potential conflict of interest, alleging that the attorney general has a personal stake in pushing back against parents who object to schools teaching “Critical Race Theory,” which asserts that people are inherently oppressed or oppressors based upon their skin color.

The New York Post has reported that Garland’s son-in-law Xan Tanner co-founded an education company which supports critical race theory curricula. According to the Post, the company services some 23,000 schools throughout the U.S. and costs taxpayers hundreds of thousands of dollars.

Cruz asked Garland whether he sought a decision from an ethics adviser with the DOJ regarding a potential conflict of interest “before you carried out an action that would have a predictable financial benefit to your son-in-law?”

#BREAKING: Sen. @TedCruz asks AG Merrick Garland if he sought an ethics opinion relating to his son-in-law’s company prior to issuing memo on school boards. pic.twitter.com/9xpwtIZHn5

“If Critical Race Theory is taught in more schools, does your son-in-law make more money?” Cruz asked, pressing Garland again on whether he sought an ethics opinion regarding the potential conflict of interest, a question the attorney general refused to respond to with a “yes or no” answer.

As his time expired, Cruz asked to “let the record reflect the attorney general refuses to answer whether he sought an ethics opinion, and apparently ethics are not a terribly high priority in the Biden Justice Department.”

“I don’t think that’s a fair reflection of what I said,” Garland argued.