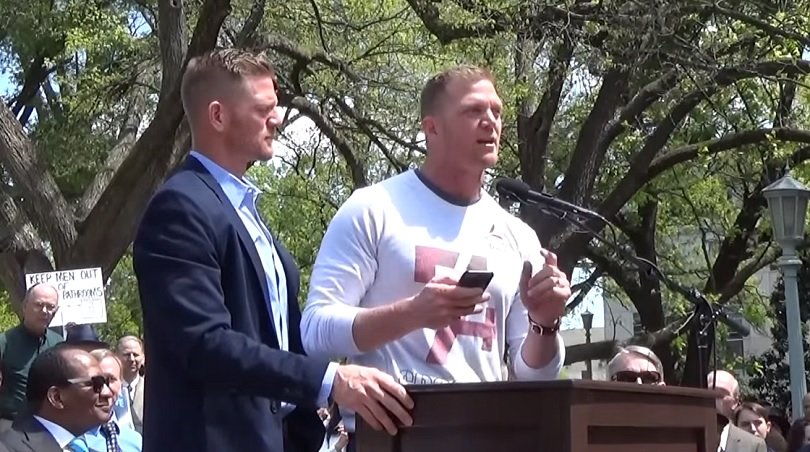 RALEIGH, North Carolina, April 18, 2016 (LifeSiteNews) – Two of North Carolina's most outspoken evangelical Christians are telling people who support family values they must stand up and be counted in this generation – because the next generation may lack that freedom.

“Our governor and our general assembly did their job,” said David Benham at a “Keep NC Safe” rally in Raleigh on April 11. “They did what was right.”

He said the law is not based on religious dogma but merely embodies “decency and privacy. These rules are in place so we can be safe. This is not forced belief. This is common sense.”

Jason thanked Governor Pat McCrory, Lt. Gov. Dan Forest, and state legislators for “showing young kids what it looks like to stand, when the whole world is coming against you.”

He recited a litany of times men had posed as transgender “women” in order to victimize females, including:

“These little girls have been traumatized for the rest of their lives,” Jason Benham said. “That won't happen to my daughter.”

The Benham brothers know what it is like to be targeted. The pair sat in the crosshairs of a massive campaign against HGTV after the network announced the two would star in their own reality TV show, ultimately scuttling their plans.

When Hollywood executives told them that a host of activist groups had arrayed themselves against them – as they have against North Carolina this month – the Benhams said these lobbyists did not represent the average citizen. “It's just a narrative that's been created,” David said.

And that narrative is often barbed and painful. He cited one headline that referred to him and his brother as “Twin Freaks.” The story, published in the homosexual outlet Queerty, compared them to “a festering case of genital herpes.”

David Benham said, since he followed Christian sexual teachings of abstinence before marriage, he would not need to worry about contracting a case of genital herpes or any other STD.

The narrative also involves selective outrage, he said. He accused PayPal of hypocrisy for operating in Islamic nations that execute homosexuals based on Shari'a law but pulling 400 jobs out of Charlotte over H.B. 2.

Once people of faith understand the narrative, they must take action, he said, quoting Martin Luther King Jr.:

Well, you may go on and live until you are 90, but you’re just as dead at 38 as you would be at 90. And the cessation of breathing in your life is but the belated announcement of an earlier death of the spirit.”

Some left-wing blog outlets blasted David for implying that the civil rights leader would oppose gay “marriage.” However, King's niece, Alveda King, has said Martin Luther King Jr. would fight to preserve marriage as the exclusive union of one man and one woman.

“If we're not willing to stand now, 20 years from now my kids aren't going to be able to stand,” David Benham said. “They're going to go to jail.” A similarly ominous theme has been sounded by faith leaders of various denominations.

For now, the brothers hope the state will hold its ground despite the vast number of corporate and entertainment leaders pressuring political leaders to alter their laws at once.

Benham Brothers: ‘Every Christian must make a decision to stand, whatever the cost’ (INTERVIEW)

Fired by HGTV for their Christian views, Benham brothers continue to speak out against abortion (VIDEO)