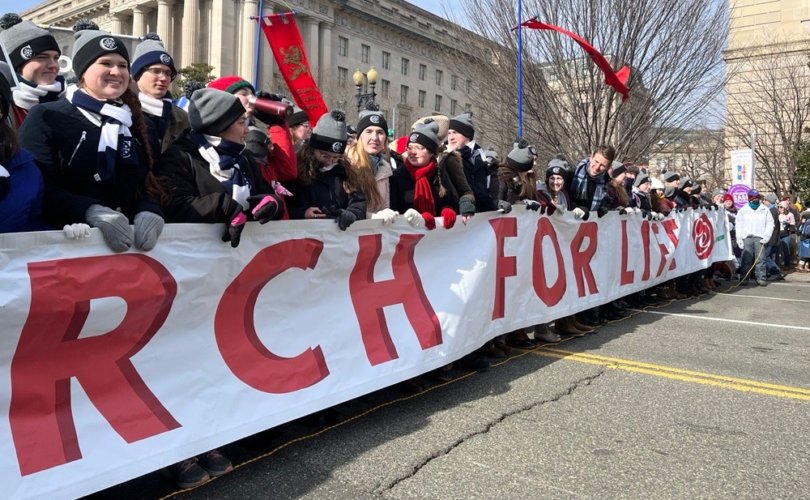 WASHINGTON, D.C. (LifeSiteNews) — Tens of thousands, if not more, of Americans are marching in Washington, D.C. today to demand an end to the human rights injustice of abortion.

Tomorrow is the 49th anniversary of Roe v. Wade, the U.S. Supreme Court case that along with Doe v. Bolton imposed abortion on demand on all 50 states.

Since Roe v. Wade more than 63 million babies have been aborted. Although late-term abortion may be technically illegal or somewhat restricted in certain American states, the U.S. remains one of only a handful of nations that allows abortion through all nine months of pregnancy. The annual March protesting the unjust Roe decision has become a major annual event where pro-lifers gather to peacefully witness on behalf of the right to life and protest legalized child-killing.

The theme of the 2022 March for Life is “Equality Begins in the Womb.”

This year a pro-life activist with Down syndrome, Katie Shaw, spoke on stage at the March for Life alongside notable pro-life figures such as Kirk Cameron and Father Mike Schmitz. Rep. Julia Letlow (R-LA); Toni McFadden, pro-life advocate and founder of Relationship Matters; and Lisa Robertson of Duck Dynasty were among the speakers. So were George Schuberg, a Christendom College student; Archbishop Elpidophoros from the Orthodox Church; and the late Rev. Billy Graham’s granddaughter, Cissie Graham Lynch.

The LifeSite team is on the ground in DC at the #MarchforLife2022 pic.twitter.com/gveVOaDF4k

Some familiar faces at the March for Life pic.twitter.com/EzK164Y91P

We’re joined by #DownSyndrome rights activist Katie Shaw at the March for Life. Katie is an outspoken advocate for equal rights for ALL unborn babies, regardless of their differing abilities #WhyWeMarch #ModernizeOurLaw pic.twitter.com/mA6IBCvx96

“What also gives me hope for this new year is the strong possibility that Roe v. Wade… will be overturned,” says @HawleyMO.

“Quite simply, there is no constitutional right to take an innocent life.” #WhyWeMarch #MarchForLife pic.twitter.com/TMMSH0o17F

Out of our 4 kiddos, three were “unplanned.” Two were adopted. All are loved like crazy. Since day one, we’ve instilled in our children that every human life has God-given purpose and He is the one who gives us equal and irrevocable worth. This is #WhyWeMarch for Life all year. pic.twitter.com/WaLnhyOnvV

#whywemarch is because we cannot forget this…

the heartbeat of a baby that should not be killed. #EveryLifeIsPrecious
pic.twitter.com/fERMQyxbyf