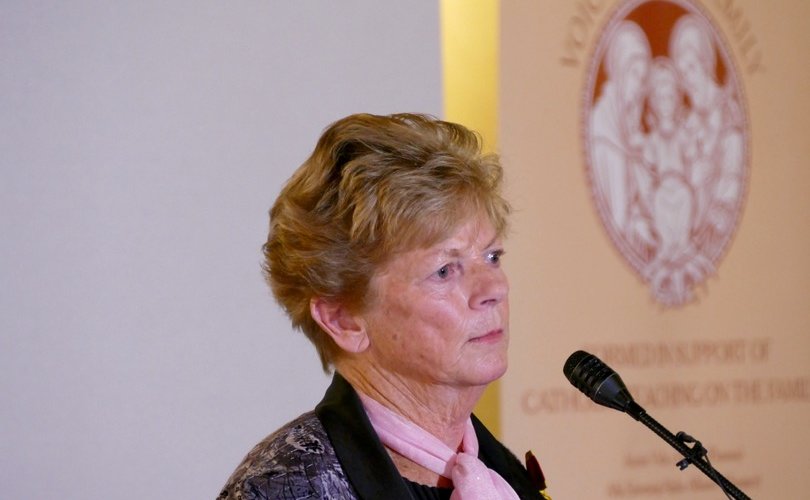 While Colleen Bayer’s stories are not by any means easy to tell or to hear, each one reveals the hideous darkness that is threatening to overcome our countries, breakdown our families, and grievously wound our loved ones.

Bayer, a papal Dame in the Order of St. Gregory the Great, held nothing back as she shared with participants her “heart of hearts” on what is really happening within the culture and within the Church. Here are her stories.

The homosexual priest who lost his life

Bayer related that a number of years ago there was an Anglican man who converted to Catholicism and decided to study for the priesthood. He was accepted into a seminary in Rome, despite revealing to the authorities at the time that he struggled with a number of compulsive behaviors and other troubles, one of which included homosexuality.

The man was eventually ordained and sent off to serve in a New Zealand diocese. But his troubles persisted. Five years of leave from active ministry with counseling did little to bring the healing he so desperately sought.

The priest befriended Bayer and her husband Terry — both workers in the life-and-family movement — and felt comfortable opening up to them about the extent of the misery that plagued his life. He eventually began telling them of his experiences from his time in the seminary in Rome.

“And it broke my heart. I used to think that we worship under the dome of Rome, that we come here [in Rome] to our home. But then to learn that in the seminary here…the devastation, the filth, and the stuff that went on is appalling,” Bayer related.

She said that the fact that this man made it into the seminary, despite his manifest problems, reveals the extent of the corruption at that time within Catholic seminaries.

“How did he get in? How was he accepted, if there wasn't already a cohort there ready and willing and available to help in that situation?” she said.

Bayer related that the last time she and her husband saw their priest-friend was at a parish fair. The next day they learned that he had taken his own life. His suicide tragically confirmed to the couple the veracity of his shocking accounts.

The papal Dame used the story as an occasion to take to task one leading prelate in the Church for suggesting that the Church would do well to embrace the so-called “positive elements” of homosexuality. Cardinal Christoph Schönborn of Vienna explained his position regarding homosexuality in an interview with La Civiltà Cattolica last year, stating that regarding same-sex couples, the “Church should not look in the bedroom first, but in the dining room!”

“Rubbish, rubbish,” she said of Schönborn’s position as she expressed outrage that a “cardinal from Rome” would deliberately minimize what homosexuals practice in the bedroom, as if it were of little consequence, and focus on their dining room manners.

“Our priest-friend lost his life because of what happened in the bedroom: Please pray for his soul,” she concluded.

In another gripping story showcasing the culture of death, this one even closer to home, Bayer related how she and her husband Terry adopted a little girl — almost 30 years ago now — who suffered brain damage after being born to a 13-year-old mother who was addicted to sniffing glue.

The couple thought they were bringing the little girl up safely, teaching her prayers, going to Mass as a family, and raising her in a Christian home with family who loved her. The disabled child eventually attended a special needs group every day that helped her to develop to her full potential, Bayer related.

But the parents became heartsick one day to discover that the special needs bus driver had molested their daughter after grooming her for a long period of time. He did this despite there being other children in the bus along with their daughter.

“He molested her and he wrecked her life,” she said.

The parents pressed charges and the man was eventually found guilty and jailed for his crime. But no sentence could ever fix the damage that he had done to their daughter, signs of which began to manifest themselves in her cutting herself and struggling with her sense of identity.

Not many years after this, Colleen and Terry became concerned when they discovered that the leaders of the special-needs group their daughter attended had begun to push gender and homosexual ideology on all of the disabled participants.

“The very group that she loves to go to with her friends [was pushing] the ideology of gender, of [what sex] you want to be this morning, lunch time, this afternoon. [They said,] ‘It's all okay, and especially if you have a disability.’ [They told her,] ‘Same sex stuff is great: You are not going to get pregnant, you are not going to have a baby.’ [They said,] ‘You can do whatever you like to do.’”

Bayer related how one day she went in earlier than usual to the special needs group to pick-up her daughter only to find her lying in the middle of the room on a mattress with another disabled man who was being intimate with her.

“[Just imagine,] my little daughter, who had already been damaged and hurt so terribly much,” she said.

When a woman in charge approached Bayer and asked curtly if she had a “problem” with what her daughter was doing, she responded: “I thought I had a problem, but you've got a problem. You are taking away the innocence of my daughter. How dare you. How dare you make a spectacle of her,” she related.

The woman bluntly responded: “Excuse me, but they are a couple.”

Bayer said that the story reveals “what we are up against” in the battle for the family.

“The very authorities, the very people who should be protecting our special needs people, are precipitating this kind of behavior,” she said.

“How dare they come into our homes and rob our children, the most vulnerable. How dare they do it,” she added.

The abused lesbian who wanted an abortion

In the last of her stories Bayer related how the crisis pregnancy center that she directs one day received a call from a pregnant woman who was currently living in her car, who was hungry, and who dared not return home until she had obtained an abortion.

The woman had called the center hoping it could help her arrange the abortion.

“Jackie wanted us to help her get the abortion so that she could go back to this liaison and everything would be happy ever after. Well, she called the wrong number from that point of view, of course,” Bayer said.

A co-worker at the center arranged to bring some sandwiches to Jackie and to talk with her about other options such as adoption or parenting. During the conversation, Jackie began speaking about the tumultuous relationship she had with her “wife.” The co-worker was at first puzzled, but then caught on that Jackie was in a lesbian relationship.

“What transpired in that conversation involved a very violent, very nasty, and very cruel ‘marriage.’ I don't want to call it that, but same-sex marriage is legal in New Zealand. So, we have a ‘wife’ and a ‘wife,’ one who is pregnant…and the other ‘wife’ bashes this [pregnant] wife up and demands an abortion. Suffice to say, it was a very nasty situation,” Bayer said.

Jackie was eventually persuaded to come to the pregnancy center where she was cared for and where she made the decision to give life to her baby, a little girl.

Bayer and the staff at the center worked hard to give Jackie love and understanding. They gently attempted to help her see the reality of the abusive relationship she was in, but to no avail. After the baby was born, Jackie returned to her abusive partner.

“When I saw Jackie’s body, I cried my heart out for the cuts and the bruises and the pinching, because I know that in her life she has been terribly hurt and wounded and abused,” Bayer said.

“It breaks one's heart,” she added.

Moving forward in the middle of a major crisis

Bayer said that the stories reveal the “crisis” that is affecting individuals, families, and the Church on a day-to-day basis.

She quoted Fr. Paul Marx, the famed pro-life missionary priest who died in 2010, who once gave her advice on how to press forward despite “terrible situations” raging all around.

“He would say, ‘Beware of the tentacles of Satan. Look for the hand of God, and move ahead,’” she related.

Colleen said that life-and-family leaders must turn to God in trust to find solutions to “guide us out of the mud, out of the mire, into a new culture of life, of faith, a family, of newness, and new life.”

“[We will move forward] with orthodoxy, by keeping centered on the Church, through servanthood, through a great sense of urgency, and with patience,” she said.