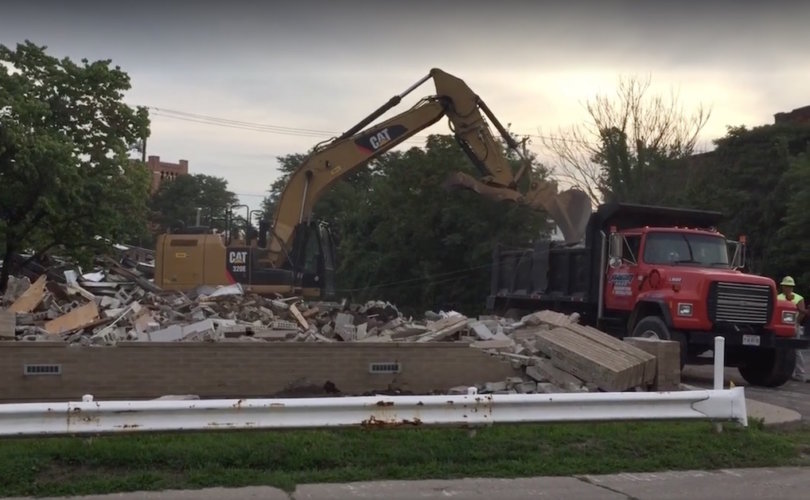 TOLEDO, August 30, 2016 (LifeSiteNews) – An abortion facility that performed tens of thousands of abortions has been demolished to make room for a memorial site to the unborn.

“Where, O death, is your victory? Where O death, is your sting?” wrote the Respect Life Ministries of Catholic Charities in the Diocese of Toledo, quoting a passage from I Corinthians, as it posted the pictures of the demolition on its Facebook page. “Thanks be to God, who gives us victory through our Lord Jesus Christ.”

“Countless mothers and fathers who had abortions there have already come back to seek healing,” the ministry wrote. “In a few short years it will be the site of Hope Park (www.hopepark.org) where countless more can return.”

Toledo’s Center for Choice performed more than 50,000 abortions between 1983 and 2013, according to Ohio Right to Life.

However, Ohio state health inspectors found the Center for Choice’s equipment covered with mold and rust, recommending a $25,000 fine in addition to the facility’s closure in 2013. The center also failed to comply with a state law, which required abortion facilities to have a transfer agreement with a local hospital in the case of a botched abortion, for three years.

A coalition of pro-life organizations stepped in and purchased the building in October 2014, with the intention to transform the former abortion facility into a pro-life center.

Hope Park “will be a place that affirms the value, dignity, and beauty of every human life as precious and valuable,” the group’s website says.

The city still has one abortion facility, the Capital Care Network of Toledo. A state appeals court ruled last month that the facility could remain open despite not having a transfer agreement with a local hospital.