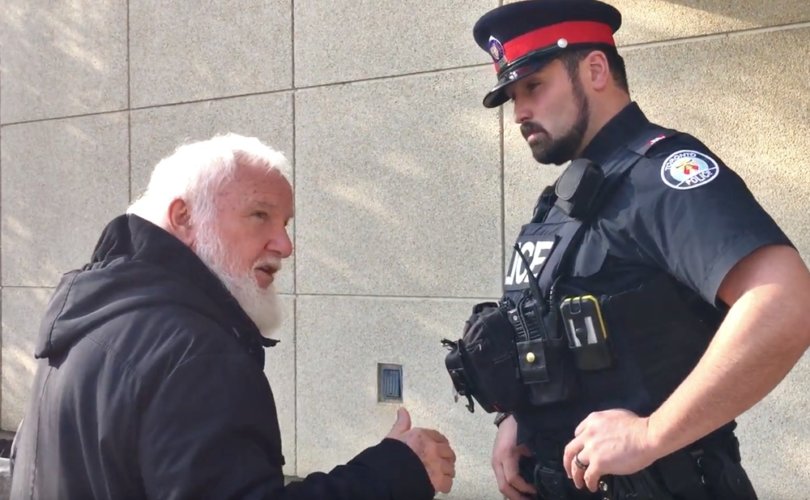 TORONTO, November 27, 2019 (LifeSiteNews) — The Toronto Catholic District School Board locked the doors on a Catholic priest and two members of a pro-family group who were trying to deliver a petition Tuesday as part of a rally asking pro-LGBT trustee Maria Rizzo to resign.

The men were stopped in their tracks by a security guard, while the locks on the doors audibly clicked shut.

They then appealed for assistance to Passionist priest Fr. Claudio Piccinini, who was among the 40 people attending the noon rally, and who tried to enter the building to no avail.

“What crime have we committed?” Piccinini wondered aloud.

“In all my years at Campaign Life I’ve never been in a situation where citizens are not allowed to hand in petitions to their public officials,” observed Wojciechowski.

The impasse was solved when Rose MacDonald, manager of facilities, came out and offered to take the petition to the board’s director of education Rory McGuckin.

Campaign Life Coalition, Canada’s national pro-life, pro-family political lobbying group, is asking Rizzo to resign over her push to add “gender identity” and “gender expression” as well as “family and marital status” as prohibited grounds for discrimination to the board’s code of conduct, which governs students and staff.

Proponents of adding the terms argued the board had to follow a ministry directive mandating school boards to align their codes of conduct with the provincial and Ontario Human Rights Code.

Moreover, a TCDSB report appended to the agenda the night of the vote said the Toronto archdiocese approved adding the terms, provided these were interpreted through a “Catholic lens.”

The archdiocese released a statement four days later conceding it recognized the terms were in the code, adding: “We do not accept the view of the human person which underlies this terminology, since that view is not compatible with our faith.”

Campaign Life along with Parents As First Educators (PAFE) and numerous delegations to the board argued that by adding the terms, the board is endorsing spurious gender theory in contradiction to Catholic teaching.

“Rizzo’s vocal promotion of the unscientific ideology of gender theory, culminating in the acceptance of ‘gender identity’ and ‘gender expression’ into the board’s Code of Conduct, has put youth at risk, and has undermined the constitutional right to keep Catholic schools Catholic,” said Cooke, Campaigns Manager for Campaign Life Coalition.

Fr. Piccinini said he came to the rally because “some of the things that are being decided upon are against our faith, and I think we have the right to speak up and say exactly what we feel as Catholics.”

Rally attendee Clare Kavanagh, one of ten children, told LifeSiteNews her father was a Catholic trustee, and she remembers waking him up from his nap after his long day at work so he could get to meetings.

Her father died at the relatively young age of 65 “partly because he took a lot of those responsibilities seriously, in protecting the faith of his family, his children and his grandchildren,” she said.

Catholic schools were “formed on the sweat and tears and money of earlier generations” and trustees should protect that “legacy of truth Jesus gave us, the truth of the Church,” Kavanagh noted.

But Rizzo, and trustees who voted with her, are “caving in to secular values…Sometimes standing up for the truth is not an easy thing, especially when the society is caving in on moral values that Jesus has taught us, the truth about marriage, the truth about how He created us male and female.”

And when Kavanagh sent Rizzo an email expressing her views, the chair sent this “cease and desist” letter, which she also sent to others:

You have emailed me to engage in unwelcome and harassing communications regarding my role and responsibilities as a Trustee of the Toronto Catholic District School Board. You have insulted me, made hurtful remarks and have discredited and attacked my integrity with false statements. I oppose the content of your email.

Pursuant to your harassing communication directed to me and these sent emails copied to the Director of Education, Rory McGuckin and other trustee members of the Toronto Catholic District School Board I will not hesitate to contact the police to report your actions if you continue to contact me.

If you do not cease your unwelcome and harassing communications immediately, I will take legal action against you.

You will not receive any additional warnings. I shall consider taking any and all legal remedies available to rectify this situation.

LifeSiteNews contacted Rizzo for comment on this letter, but received no response.

“It was a bullying, threatening, intimidating letter,” Kavanagh said. “Maria Rizzo is in a public position and this is input from the people who support that institution…so I was quite appalled.”

Another Catholic parent who received a “cease and desist” letter from Rizzo didn’t want her name published “because of fear of Maria Rizzo and the school board” and said she felt “upset and unnerved” and “extremely bullied and attacked,” by the missive.

“Indoctrinating” children in gender ideology when they do not have the emotional and psychological maturity to grasp such concepts is “bordering on child abuse,” the Catholic mother said.

That was echoed by Lou Iacobelli, a retired Catholic principal.

“Gender is a made-up term,” he told the rally.

“It has nothing to do with the Catholic identity of a human being who was created male and female to love and serve God, and anybody who says different is playing politics with our children and grandchildren.”

Meanwhile, trustee Del Grande is under attack for facetiously proposing an admendment November 7 that the board add other sexual identities, such as pedophilia and bestiality, to the code of conduct to be truly inclusive.

Del Grande is standing for chair of the TCDSB, one of the largest school boards in Canada, and the trustees will vote Thursday.

He is running against Markus de Domenico, who said on the Campaign Life Coalition questionnaire he would oppose the teaching of gender ideology in Catholic schools, but who voted for the policy change.

De Domenico also suggested the Church has changed her previous “judgmental” stand on homosexuality and transgenderism.