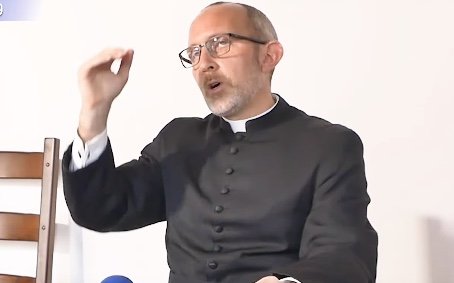 ROME, October 24, 2019 (LifeSiteNews) – Fr. Anthony Pillari, JCL, spoke to a group of young people in Rome about the spiritual battle that all persons encounter, as well as the divine and angelic aids on which they can rely to resist temptation.

Fr. Pillari, an American priest currently serving in England, referred to Holy Scripture and the work of St. Thomas Aquinas, who is known as the “Angelic Doctor” because of his well-developed theology about angels. In a video recorded at the second annual Rome Youth Forum organized by LifeSiteNews, Fr. Pillari recalled that God created angels out of “gratuitous love” as spiritual beings for their own sake and to “live for the glorification of God.”

At the beginning of time, God created an untold number of angels, Fr. Pillari said, who are essential to our salvation. He noted that to each person is assigned not only a guardian angel but also an angel who encourages temptation. Fr. Pillari recalled that Satan is an angel who, because of his pride, wanted to “be like God.” Satan, like the other angels, had supreme intelligence, but he knew that he could not be like God, the priest said.

Knowing that God was offering happiness beyond comprehension, Satan also knew that God was placing two conditions on that happiness.

“First of all, this happiness could not be attained by any angel’s natural gifts, abilities, or work. It would have to be a grace received by abandoning himself to God in the obscurity of faith, by trusting in God,” said Fr. Pillari. “Secondly, he knew this gift was being proposed to everyone, to all the angels and the men who he knew would be created he knew that God was going to this gift … even to those far inferior to Satan.” Satan, he said, prefers to cling to his natural abilities rather than opening himself to divine grace.

Satan refused to be dependent on God. To obtain salvation, human beings must not only use their natural abilities, such as their intelligence, to have faith and depend on God and thus resist temptation, said the priest. As an implement in the spiritual battle against temptation, Fr. Pillari offered at the beginning and end of his talk the words of Compline, part of the evening prayers said by religious:

“Stay sober and alert. Your opponent the devil is prowling like a roaring lion looking for someone to devour. Resist him, solid in your faith.” 1 Peter 5:8-9.

The Catholic Church recognizes the holiness of the angels on various days throughout the year. October 2 is the feast of all guardian angels. September 29 is the feast day of the angels Michael, Gabriel, and Raphael. Michael is known as the prince of all angels, and Gabriel announced to Mary that she would become the Mother of God.

A second feast day is reserved for St. Raphael on October 24. Raphael means “God heals.” In the Book of Tobit of the OId Testament, Raphael appears disguised as the human traveling companion of Tobit's son, Tobiah. Raphael’s powers are shown, for example, in the binding of a demon in the Egyptian desert. After healing Tobit of blindness, Azarias reveals his true identity as “the angel Raphael, one of the seven, who stand before the Lord.”

In the New Testament, the Gospel of John speaks of healings at Bethesda, where “an angel of the Lord descended at certain times into the pond; and the water was moved. And he that went down first into the pond after the motion of the water was made whole of whatsoever infirmity he lay under.” Because healing has been ascribed to him, Raphael has been associated with the moving waters and healing at the pool.