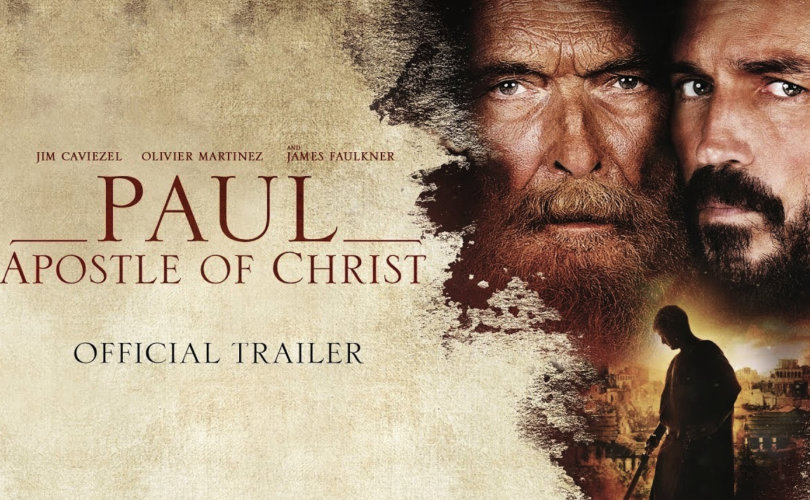 HOLLYWOOD, California, January 31, 2018 (LifeSiteNews) — The official movie trailer for the highly anticipated “Paul, Apostle of Christ” has been released.

The film, directed by Andrew Hyatt, chronicles the apostle’s last days, which were spent in a Roman prison awaiting execution under Nero.

St. Luke visits him, as is in the biblical account, and writes the history of the early church, recounting the missionary’s journeys to spread the Gospel that are recorded in the Acts of the Apostles.

The story is fascinating not only because of Luke’s dangerous pilgrimage (the emperor is determined to eliminate Christians) but because of Paul’s amazing transformation.

Originally, Saul was a Jesus-hating Pharisee, the foremost persecutor of Christ followers in his quest to defend what he believed to be true Judaism. A man of the Law, he was zealous in both condemning Christians (a derogatory term that means “Little Christs”) and in his own self-righteousness under the ritual regulations of the Torah.

Saul breathed “threats and murder” against anyone who believed Jesus was the Messiah, now risen from death. As a leading Pharisee, he authorized the stoning to death of Stephen, the first servant in the sect of Judaism then known as “The Way.”

But on his bloodthirsty mission to Damascus to arrest and prosecute disciples, Saul encountered the Risen One.

“Suddenly a light from heaven flashed about him,” the scripture relates, “and Saul fell to the ground.”

Then he heard an audible voice calling his name. “Saul, Saul, why are you persecuting Me?” It was Jesus, who was crucified and confirmed dead by Roman authorities.

There’s much more to the story, but this epiphany so changed Saul that he devoted the rest of his life to convincing others that Jesus is, indeed, the Messiah. He traveled the world over — more than 10,000 miles by foot and boat — to proclaim the Christ he formerly hated. And his name was changed from Saul to Paul.

Jim Caviezel, who played Jesus in “The Passion of the Christ,” is cast as St. Luke. James Faulkner (Downton Abbey, Game of Thrones) is St. Paul.

“The name Saul means ‘great one.’ The name Paul means ‘little one,’” Caviezel told a riveted audience of Fellowship of Catholic University Students at the Leadership Summit 2018. “While making this film, I learned that by changing one tiny letter, we can become great in the eyes of God. But it requires us to be little, if we wish to be great.  This is the way of the saints; this is the way of the holy; and this is the way Saul became St. Paul.”

Hyatt said the only source material for the script was the Bible. He did, however, create a fictional character named Mauritius, a prison warden who is incredulous “how this broken old man can pose such a threat.”

“It will be a very beautiful, emotionally moving film, with a rather wonderful ending,” Faulkner (Paul) explained. “Redemption is offered and is clear.”

Paul, Apostle of Christ will be released in theaters on Holy Wednesday, March 28.

Caviezel is a devout Catholic who has called abortion “the greatest moral defect of the western world.” He is also working on a sequel to “The Passion of the Christ” with director Mel Gibson that focuses on the Resurrection.