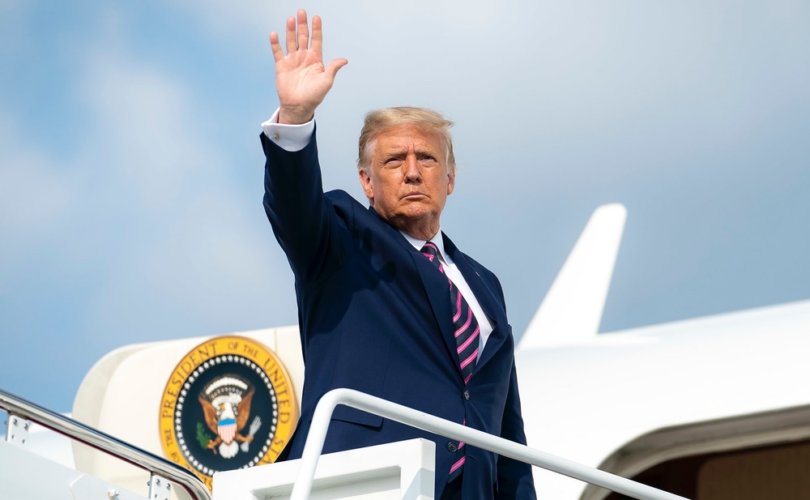 “I will protect the Catholic Church and I will defend the rights of religious believers of every race, religion, color, and creed,” he said at the event.

This long-standing white-tie dinner, ordinarily hosted by the Archbishop of New York at New York City’s Waldorf-Astoria hotel, raises money for children of the archdiocese. Due to COVID-19, the event this year was hosted virtually from the Archbishop’s residence. The Alfred E. Smith Memorial Foundation founded the event in honor of Al Smith, four-time governor of New York and the first Catholic presidential candidate nominated for a major party.

Trump praised Catholics for their faith and works.

“Now, more than ever, our nation needs a renewal of the values that this organization promotes and that the Catholic faithful live out each and every day in peace,” Trump said in reference to the Foundation’s work.

In his speech, President Trump also reaffirmed his defense of the “sacred right to life,” saying “Every child, born and unborn, is made in the holy image of God.”

Trump has been repeatedly lauded for his pro-life policies and appointments by Catholic clergy, including Archbishop Joseph F. Naumann, chairman of the USCCB Committee on Pro-Life Activities.

Naumann reminded Catholics last week that abortion is the “preeminent” social justice issue when it comes to voting.

By the same token, outspoken pro-life clergy have declared that faithful Catholics cannot vote for pro-abortion Biden and the Democratic Party and consider themselves truly Catholic.

“You can not be Catholic and be a Democrat. Period,” said Fr. James Altman in a video that went viral in August.

In a similar vein, Archbishop Samuel Aquila of Denver said earlier this week that “It is not possible to be a Catholic in good standing and support abortion.”