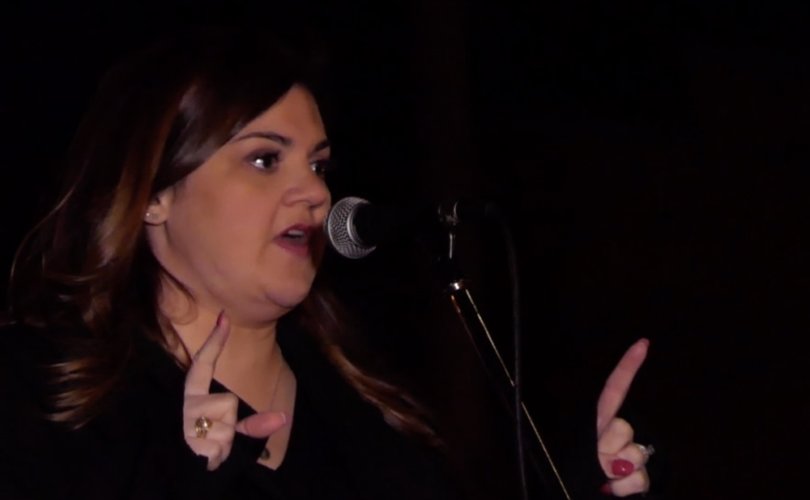 OTTAWA, May 8, 2019 (LifeSiteNews) – ‘Unplanned’ author and former Planned Parenthood manager Abby Johnson told Canadian pro-lifers that they must not only pray to end abortion, they must act “fearlessly.”

Johnson made her comments at a candlelight vigil tonight in the nation’s capital where men, women, and children gathered to honor the preborn targeted by abortion. The vigil was held one day prior to the National March for Life.

Abortion was first legalized in Canada in 1969. There are now roughly 100,000 abortions every year.

Johnson told the crowd, many of whom were young people, that it is time for the world to see abortion the way she saw it as a former Planned Parenthood manager.

“It's time for the world to see what happens inside of these abortion facilities,” she said. “And it's time for us as a pro-life collective to begin speaking out fearlessly in the defense of the unborn and their mothers,” she said during her speech at the Canadian Tribute to Human Rights monument in Ottawa.

Johnson went on to describe the abortion she witnessed that “changed my life and caused me to leave” the abortion industry.

I had been called into a room to assist with a 13 week abortion. 13 weeks is still in the first trimester when the bulk of abortions are performed in your country and in mine at that time. I was asked to hold an ultrasound probe on the woman's abdomen so the doctor would be able to see the baby as it was aborted, as it was killed.

We did the measurement. We found the baby was 13 weeks. And by 13 weeks despite what people tell you, science confirms for us that by 13 weeks everything on the unborn child is completely formed – arms, legs, fingers, toes. The heart is beating. Brainwaves are active. Every single internal organ that we stand here with today is already formed on the unborn child, by 13 weeks gestation. Outside the womb, the baby is only a few inches long and we can even tell if it's a boy or a girl, at that time.

There is nothing more unscientific than the abortion movement.

But I stood there looking at this monitor feeling nervous, feeling apprehensive, and I watched a suction cannula — it looks like a straw, it's open on both ends, that's what actually hooks up to the larger suction machine — I watched that go into the woman's uterus. I could see it getting closer and closer to the side of this baby. And, when it finally touched his side, he jumped. And this baby began flailing his arms and legs, as if he was trying to move away from the abortion instrument. But there was nowhere for him to go. He was trapped inside of his mother's womb – the place that should be the safest for an unborn child to live.

When the doctor had the suction tube in the right position, he asked the technician to turn on the suction machine. And it was at that time I could see the legs become dismembered from the child's body. And then the arms. And the final thing that I saw in that woman's womb that day, was a perfectly formed tiny backbone, swirling and floating around, inside his mother's uterus. And in just an instant, just like that, it was suctioned away. And the uterus was empty.

I knew at that time that what I had seen was not a ‘choice.’ That child was given no choice that day.

Johnson said that abortion providers weren’t there to offer women “choice,” but “abortion, ” because “abortion is what made us money.”

She said that what is happening inside of the abortion facilities and hospitals in Canada as well as the U.S. amounts to “abuse.”

“It is abuse of the unborn. It is the ultimate form of bullying. And these providers are willing to bully innocent unborn children, till death,” she said.

She encouraged those present at the vigil to “speak up” for the preborn.

The crowd could be heard in the background cheering and shouting “amen” after Johnson said this.

Noticing signs that said “pray to end abortion” in the crowd, Johnson said that it will not only take prayer to end abortion, but concrete action as well as sacrifice.

“Lives are literally hanging in the balance. These babies are depending on your voice and your action, not just your prayers. They're depending on you to act, to sacrifice, to serve, to do something,” she said.

“This tragedy of abortion is rampant, in your country and in mine. Don't allow this opportunity to pass you by. Don't allow any opportunity to stand up for the unborn to pass you by. Use every opportunity you can. God did not place you here on earth to win some sort of popularity contest to see how many friends you can gather on Instagram. He sent you here to evangelize his truth. And his truth is the Gospel of life,” she said.

“Do it. Speak it every chance you can,” she concluded.