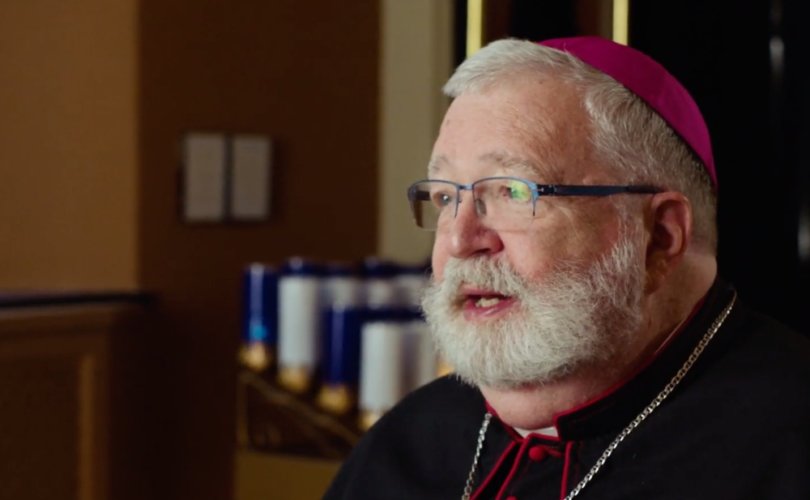 Bishop Daniel Jenky in a Dec. 9 video appeal for prayer for progress of the Cause for Beatification of Fulton Sheen.Msgr. Stanley Deptula / Youtube

PEORIA, Illinois, December 11, 2019 (LifeSiteNews) — A U.S. bishop is asking faithful Catholics to join him in a nine-day prayer campaign beginning Dec. 12 “to petition God unceasingly” that the beatification of Archbishop Fulton Sheen will move forward after it was postponed by the Vatican last week.

Standing in front of the tomb of the famed televangelist and venerable servant of God, Bishop Daniel Jenky of Peoria, Illinois explained how “deeply saddened we all are about the postponement of the beatification of Fulton sheen.”

“But, in these turbulent times, when our faith is being tested — which even Fulton Sheen prophesized — we need to remain faithful to prayer, like Archbishop Sheen. We are confident in the power of prayer. Let us petition God unceasingly to remove all obstacles for the beatification of Fulton Sheen,” he said.

“So please, join me beginning on December 12th, the feast day of Our Lady of Guadalupe, so that under her Immaculate mantle we begin a special nine-day novena asking God to please raise up Fulton Sheen and pour out his blessings on his cause for the beatification and canonization,” Bishop Jenky added.

The prayers for each day of the novena can be found on CelebrateSheen.com, which is administered by the Peoria diocese. Dec. 12 is also the 40th anniversary of Sheen's death.

While the Catholic evangelist and media personality was to be beatified on Dec. 21 in Peoria, the Vatican announced last week that the ceremony was to be postponed. It was later revealed that the delaying of the beatification was triggered by Rochester, New York Bishop Salvatore Matano as a precautionary measure while that diocese sorted through more than 70 recently filed sex-abuse lawsuits.

Sheen was Bishop of Rochester from 1966 to 1969. A probe by Church authorities, who also revealed their results to civil authorities, found no allegations of abuse or cover-up on Sheen’s part. However, in its Dec. 5 statement, the Rochester diocese cited concerns about advancing Sheen’s beatification “without a further review of his role in priests’ assignments.” While acknowledging that it had done its “due diligence in this matter,” the statement said that the beatification process needs “further study and deliberation.”

Monsignor James Kruse, who has been described as a “key cog in Peoria Diocese’s sainthood campaign for Sheen,” described the move as “sabotage.” The Peoria diocese has declared that Sheen’s life has been thoroughly examined, and that he “did nothing wrong.”

The disposition of Sheen’s mortal remains was a source of contention between the Archdiocese of New York and the Diocese of Peoria. After litigation in civil court, the Peoria diocese prevailed this year and Sheen’s body was taken to the diocesan cathedral to be buried in a vault.

Sheen was an effective apologist for Catholic teachings and common sense who had the most popular program on American television in the 1950s and early ‘60s. He died in 1979 after being sidelined from his television program and sent by Cardinal Francis Spellman in 1962 to head the Rochester diocese. Sheen is now known as the Venerable Servant of God and, if beatified, would become known as Blessed.