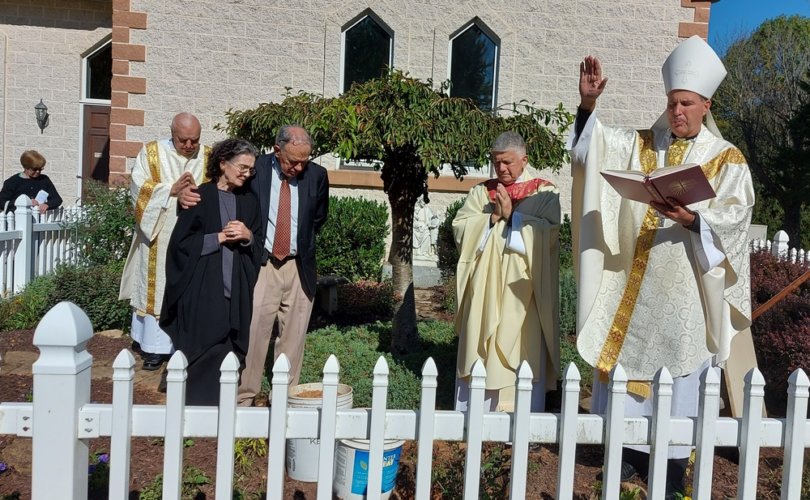 TOWSON, Maryland, October 21, 2020 (LifeSiteNews) – A U.S. Catholic bishop along with several priests held a funeral service in Maryland for a baby who was left in a restaurant's toilet after a botched abortion.

The baby, named Philomena Grace by a pro-life woman who secured the baby’s body from the state of Maryland’s Anatomy Board, had developed to a viable age within her mother’s womb when the mother decided in November 2019 that she did not want the child. The mother, according to a report by a detective who was assigned to the case, visited a Washington, D.C. abortionist who began the process of a 3-day medical abortion. Officials surmise that the woman was sent home and went into labor before the abortion could be completed, delivering the already dead baby, according to an autopsy, in a restaurant’s lavatory in Upper Marlboro, Maryland.

Bishop Joseph Coffey, Fr. Edward Meeks, and Fr. William Kuchinsky concelebrated a funeral Mass for Philomena at Christ the King Catholic Church in Towson on October 17. Over 100 people attended. The baby was laid to rest with the dignity she deserves as a child of God.

The child’s brief life was tragic. On November 27, 2019, a restaurant employee entered the ladies' room for a scheduled cleaning and discovered a baby in the toilet. The police were called and the body taken to the state office of the chief medical examiner, where it was determined that the female baby was 25 weeks’ gestation. Marjorie (Missy) Smith, founder of the pro-life organization WAKEUP, learned of the sordid event and, knowing that the body would be disposed of, requested and was given permission to claim the child for burial.

Smith, having a strong devotion to St. Philomena, named the baby Philomena Grace. She, along with Jack Ames, director of Defend Life, became the spiritual godparents of the infant. They arranged for the care of the body during the several months of pandemic lockdown, the funeral and burial of the child.

The child’s name was well chosen. Virtually nothing is known about baby Philomena’s parents, their situation, or even if she had siblings. Little is known about St. Philomena. There is no written historical record of her, and what is believed is due to a visionary in 1833.

In his homily, Bishop Coffey, auxiliary bishop for the Archdiocese for the Military Services, spoke about the significance of the child’s name, Philomena Grace. The saint, whom the Church has designated the patron of babies and infants, is thought to be the daughter of a Christian Greek prince. When she was 13, in 304, Philomena accompanied her parents to the court of Emperor Diocletian who, captured by her beauty, desired her for his wife. She refused based on a vow of perpetual virginity she earlier had made to Our Lord.  The enraged emperor had her tortured and finally beheaded. Philomena was buried and forgotten for 1,500 years until her remains were discovered in a catacomb in 1802. Miracles soon occurred when relics of her remains were distributed, leading to her canonization.

In addressing her second name, the bishop said, “Grace is the love and mercy given to us by God because God desires us to have it, not because of anything we have done to earn it. Grace is the favor, the free and undeserved help that God gives us to respond to His call to become children of God, adopted sons, partakers of the Divine Nature in eternal life.”

The bishop also used the occasion to speak of the broader issue of life facing the nation: “We are trying to change a very unjust law that allows this to happen legally. Roe v. Wade must, and we hope and pray for those aborted babies, that it will be overturned and hopefully soon.”

He urged people to have hope, in spite of the small numbers of individuals who sometimes pray near abortion facilities. A reason that people pray there, he said, is that “when these babies die that day, they are not dying alone. We are there.” He continued, “We don’t know the circumstances of Philomena Grace’s birth mom … but we know that Philomena Grace was wanted by God.”

“We recommit ourselves to never grow weary. Like St. Paul, fight the good fight, run the race to the end. Tomorrow is not promised to anyone of us, but we have today, and today, thank God, we have the life, thank God, the gift of baby Philomena Grace.”

After the Mass, the child was carried to a Garden of Innocents adjacent to the church, where Fr. Meeks and the bishop conducted a graveside service.

Nov. 2, 2020 update: This report now gives a more accurate description of the abortion procedure the mother was likely undergoing.