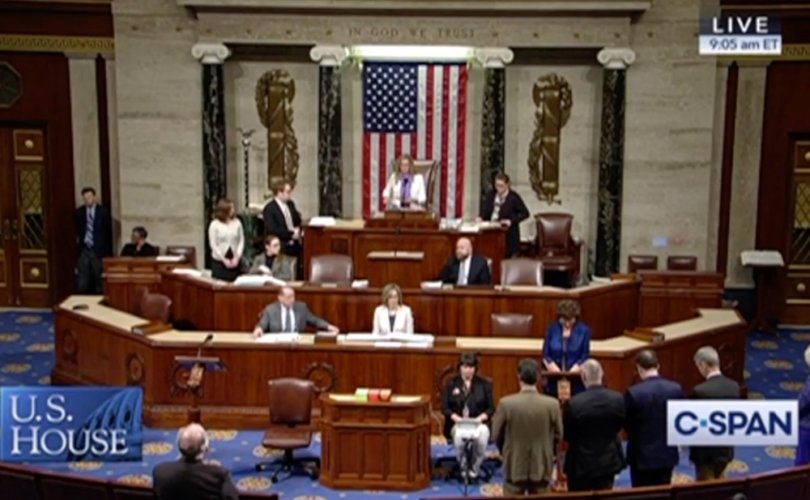 The US House of Representatives holds a moment of silence for abortion victims, Feb. 13, 2020. C-Span

WASHINGTON, D.C. February 13, 2020 (LifeSiteNews) – U.S. Rep. Jackie Walorski (R-Ind.) today led the House of Representatives in a moment of silence for the 2,411 unborn children whose remains were buried yesterday in a dignified ceremony after being stored for nearly two decades on the property of Indiana abortionist Ulrich Klopfer.

“Such callous disregard for human life should shake us to the core,” Republican Congresswoman Walorski said. “These children deserved justice and dignity. Madam Speaker, I ask my colleagues to join me in observing a moment of silence for the thousands of innocent victims that were laid to rest yesterday.” Walorski represents the 2nd Congressional District of Indiana, serving as a member of the House Ways and Means Committee.

“I rise today to honor the 2,411 unborn children whose remains were finally laid to rest with dignity yesterday in South Bend, Indiana,” Walorski said.

“These victims of Indiana’s most prolific abortionist would be in their late teens now, graduating from high school and entering into college. But their innocent lives were cut short, and they were denied a proper burial. Instead, their remains sat for almost 20 years in a garage and a car trunk, in moldy boxes and Styrofoam coolers. Such callous disregard for human life should shake us to the core. These children deserved justice and dignity,” she added.

“To make sure this never happens again, the House must pass the Dignity for Aborted Children Act to build on Indiana’s law, upheld by the Supreme Court, that requires dignified treatment of aborted fetal remains,” Walorski continued.

“Madam Speaker, I ask my colleagues to join me in observing a moment of silence for the thousands of innocent victims that were laid to rest yesterday. Thank you, and I yield back.”