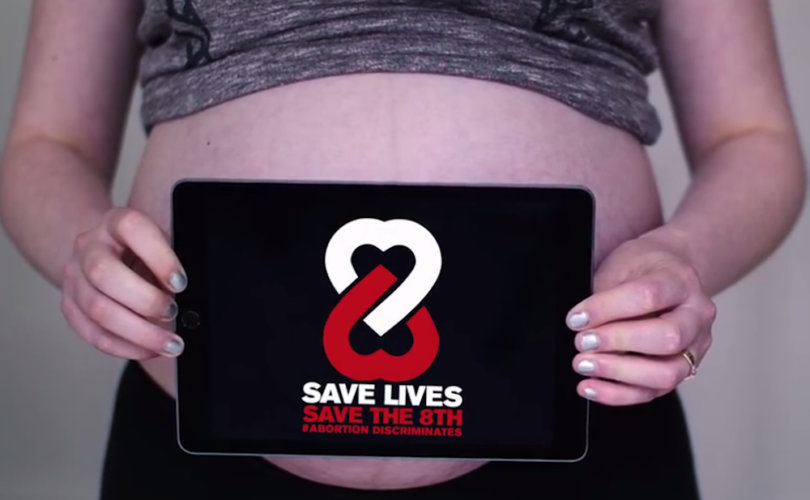 IRELAND, September 30, 2016 (LifeSiteNews) — Ireland’s abortion lobby might have billionaire George Soros in its pocket along with mainstream media in the all-out fight to overturn the country’s pro-life Eighth Amendment, but they don’t have a group of dedicated pro-life teens who have just released a powerful video defending the law that’s going viral.

“Repeal Kills: See the reality behind the slogan” was released last weekend by Youth Defense, Ireland's largest and most active pro-life organization. The one-minute, 49-second video that shows the reality behind the push to extend abortion has already racked up 242,000 views on Facebook and YouTube combined.

Ireland, considered one of the world’s safe havens for preborn children, passed via referendum in 1983 the Eighth Amendment, which upholds the “right to life of the unborn and, with due regard to the equal right to life of the mother, guarantees in its laws to respect, and, as far as practicable, by its laws to defend and vindicate that right.”

The abortion lobby under the banner of “The Abortion Rights Campaign” is calling the law “archaic and dangerous” and is hoping to have a referendum to repeal the law “so that full reproductive health services, including abortion, can be made available.” They campaign with the slogan “Repeal the 8th.”

In response, Youth Defense created a video that they say shows the “reality behind the ‘repeal the 8th’ slogan.”

Drawing on historical situations where words like “segregation” and the “final solution” were used to discriminate against a class of people, the film makes the case that “repeal” in Ireland is the new word for discrimination.

“‘Repeal’ [is] the word currently being used in Ireland to address the ugly truth of abortion. It kills a baby. […] When you hear the slogan, ‘Repeal the 8th,’ do you really know what it means? It means unrestricted access to abortion on demand, abortion for any reason, throughout all nine months of pregnancy,” the film states.

Clare Molloy of Youth Defense hopes the film will be a “game-changer” for Irish people unsure of what the “repeal” campaign is all about.

“The Irish people have been hearing a constant ‘Repeal the 8th’ message from the media on a daily basis, and this video shows the reality behind that innocuous phrase. The reality is that abortion kills a baby, and Ireland can do better for mothers and babies,” she said.

“As has been done in every jurisdiction in the world, phrases like ‘repeal’ and ‘choice’ are used to mask the reality of abortion. Using euphemisms was also a tactic used to justify slavery and genocide and civil rights abuses. We’re making sure that deception is revealed here,” she said.

Ireland’s Life Institute, which is campaigning alongside Youth Defense to defend the Eighth Amendment, called the video “powerful and hugely effective.”

The institute’s president, Niamh Ui Bhriain, told LifeSiteNews that if Ireland’s constitutional protection of preborn children is repealed, then the country would follow the pattern of other European countries where “babies' lives have become utterly disposable.”

“If we look at the shocking abortion rates across Europe — 21 percent of all babies lose their lives to abortion in Britain; 90 percent of babies with Down syndrome are aborted; Sweden has a 40 percent repeat abortion rate — we can see that without the 8th amendment Ireland faces the disturbing vista of abortion on demand and all the consequences that entails,” she said.

“We'd be turning our backs on progress and compassion and failing mothers and babies. That's why we're fighting so hard to Save the 8th and reveal that #RepealKills,” she added.

The abortion lobby is hoping to have a referendum on the Eighth Amendment within the next 12 months.