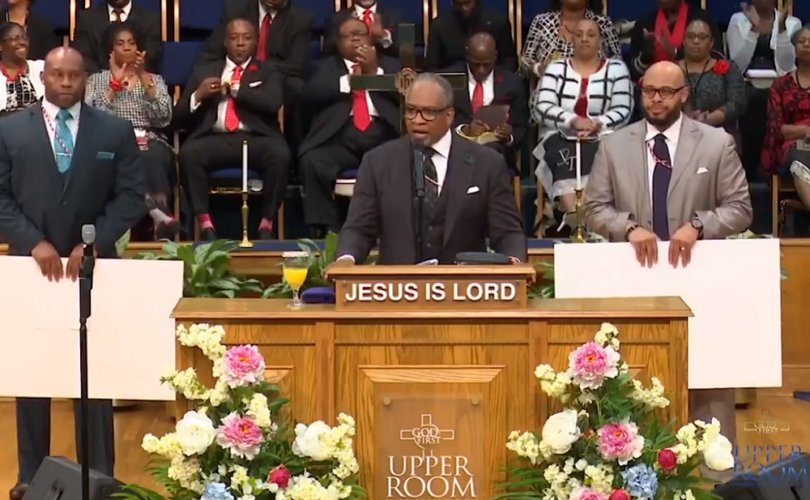 February 20, 2020 (LifeSiteNews) — A video has gone viral online of a Christian pastor in Raleigh, North Carolina, calling out so-called “woke” churches who fail to speak out on the eugenic agenda of the founder of the world’s largest abortion corporation.

Shoutout to this truly woke pastor for calling out Planned Parenthood's racist roots. ����

During this #BlackHistoryMonth, we must recognize that if we don't shut down the abortion industry, there will be no black future. pic.twitter.com/W6QA1Ix96L

Patrick Wooden of the Upper Room Church of God in Christ in Raleigh quoted a 1939 letter by Margaret Sanger, founder of Planned Parenthood, in which she wrote to a fellow eugenics and abortion advocate: “We do not want word to go out that we want to exterminate the Negro population.”

“You bishops and pastors and leaders out there, if you haven’t told your congregations about the No. 1 killer of African-Americans, an organization that kills more African-Americans every two weeks than the [Ku Klux] Klan did in its entire history, you are not qualified to use the word ‘woke.’ For you are the epitome of being asleep! You’re asleep at the wheel.”

The video currently has over four hundred thousand views on Twitter alone.

Sanger was a vocal proponent of birth control and euthanasia as tools of eugenics, on the basis of factors including race.

A member of the American Eugenics Society, Sanger wrote that “clear[ing] the way for Birth Control” was necessary for the success of “eugenists and others who are laboring for racial betterment” and declared the “campaign for birth control is … practically identical in ideal with the final aim of eugenics.”

“[T]he mass of ignorant Negroes still breed carelessly and disastrously, so that the increase among Negroes, even more than the increase among whites, is from that part of the population least intelligent and fit, and least able to rear their children properly,” read one article from Sanger’s magazine The Birth Control Review.

In August 2019, A U.S. National Day of Mourning was held by a coalition of pro-life organizations to draw attention to the deaths of more than 20,000,000 black babies snuffed out by abortion since the the 1973 Roe v. Wade decision imposed abortion on demand across the country.

In 2011, Planned Parenthood issued a statement distancing itself from some of Sanger’s words.

Veronica Byrd, who at the time was serving as Planned Parenthood’s director of African-American media, said: “For all her positive work, Margaret Sanger made statements some 80 years ago that were wrong then and are wrong now.”

But just last year, Alexis McGill Johnson, Planned Parenthood’s newest president, published an op-ed in the Wall Street Journal, entitled: “In Defense of Margaret Sanger on Eugenics,” in which she denies that Sanger promoted eugenics.

At the time of Johnson’s article, pro-life campaigner and founder of the Radiance Foundation Ryan Bomberger said that in reality, Sanger embodied the “virulently racist” eugenic groups of which she was a member.

“Sanger didn’t merely promote it [eugenics]; she embodied it as a member of the virulently racist American Eugenics Society and one of its ringleaders,” he said.

“Johnson’s denial of basic historical facts is a pathetic and desperate attempt to rewrite history and project Planned Parenthood’s own inherent racism. An industry that was inarguably birthed in eugenic racism and elitism somehow wants people to believe that the leading killer of black lives isn’t practicing systemic racism but ‘reproductive justice.’”