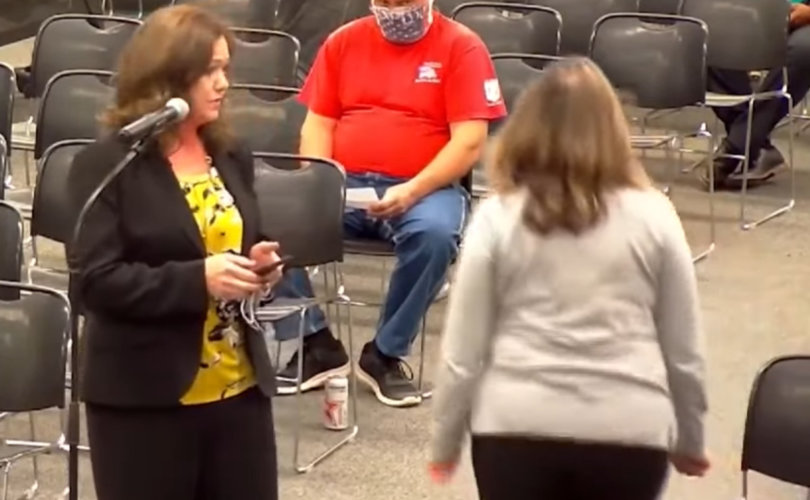 RICHMOND, Virginia (LifeSiteNews) — A pro-mask Virginia school board chairwoman stormed out of a meeting after one of the parents confronted her with Facebook pictures of herself without a mask while in close contact with other people.

The incident took place at a February 15 school board meeting in Montgomery County, Virginia.

Parent Alecia Vaught confronted school board chairwoman Susan Kass, who ended up storming out of the meeting. A video of the confrontation between the two women has been circulating on social media and went viral.

Vaught began her speech by referring to a bill prohibiting school districts in Virginia from requiring students to wear masks in school, which was recently signed into law by Republican Gov. Glenn Youngkin.

“We’re taking the power out of your hands and putting it back with the parents, the way it should be,” Vaught said.

She then called the school board members “hypocrites” for their unwillingness to apply the new law after they insisted to follow former Democratic Gov. Ralph Northam, who made masks mandatory for all public school kids.

“We sat here last year and listened to you guys preach to us about Governor Northam’s executive orders and how we must follow them. Remember that?” Vaught said. “Here’s a governor that comes into office, but yet you don’t want to follow his orders. Why is that? Why is it different from last year when we were here to this year?”

“Two different governors, different political parties. So we’re supposed to follow it last year, but not this year? That makes no sense, and it makes all of you a bunch of hypocrites,” she added.

The confrontation with Kass first occurred when Vaught singled out Kass, who had yelled at her during a previous meeting for taking off her mask.

Vaught held up her phone and apparently showed Kass’ Facebook pictures of her with no mask on while in close contact with other people. Kass later claimed they were members of her own family.

“Here’s a picture of you right here on Facebook with a crowd of people with no mask on,” Vaught said.

At that point, Kass attempted to shut down Vaught, saying wouldn’t be allowed to continue to speak and even asking for a police officer standing guard nearby to intervene.

“Can you please ask Ms. Vaught to leave?” Kass asked the police officer.

“For what? For speaking the truth?” Vaught replied.

At that point, Jamie Bond, another member of the school board, intervened and defended Vaught’s right to speak.

“She should be able to say her piece,” Bond said. “I’ve had to listen to people come and criticize me.”

“That’s my family!” Kass retorted, referring to the people shown on the Facebook picture.

“What do you think about our family? Our family has been suffocated to death with your policies,” Vaught replied.

The chairwoman then got up and storm out of the meeting.

The altercation took place only two days before Gov. Youngkin signed a new piece of legislation that defends the right of parents over school officials to decide whether or not children must wear masks in school.

Virginia school districts will have until March 1 to comply with the new law.

Experts and studies around the world have suggested that wearing a mask is not only inefficient at slowing the spread of COVID-19 but could also have harmful effects on people’s physical and mental health, particularly children.