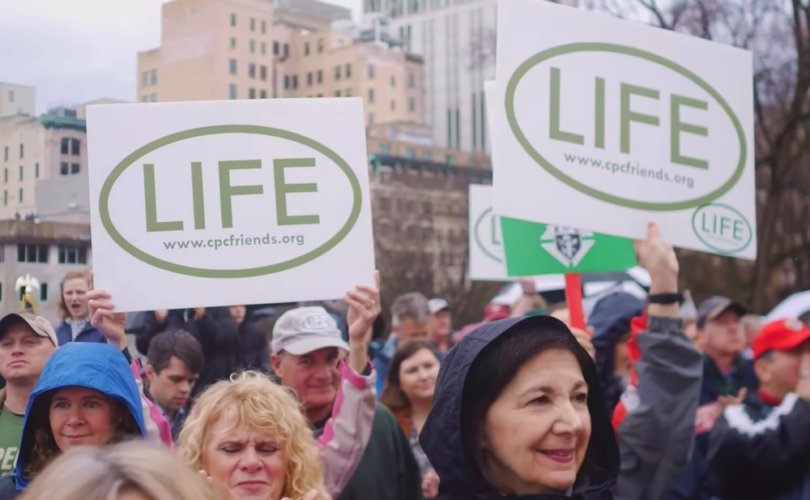 Marchers at the Virginia March for Life, Feb. 13, 2020. LifeSiteNews

VIRGINIA, February 13, 2020 (LifeSiteNews) — Despite a rainy forecast in central Virginia, thousands of Virginians flocked to the state capitol today to oppose the radical abortion agenda of Virginia’s new Democratic-controlled legislature.

“Now our Commonwealth is passing laws which will add tragically to that number,” stated Bishop Barry Knestout, of the Diocese of Richmond, at an opening Mass for the day.

“So, on this day we join as local churches — Arlington, Richmond — in fervent and urgent prayer,” he added.

Drawing concerned citizens from near and far, this year’s March for Life challenged the newly elected Democratic majority with the message that liberal pro-abortion extremism has no place in the commonwealth.

Victoria Cobb, president of the Family Foundation, told LifeSiteNews at the event that Virginia pro-lifers must have hope despite the bleak situation they face with a Democratic-controlled legislature.

“We are never without hope. If you’re a person of faith, you’ll never be without hope,” she said.

“But it is a difficult time. But there are seasons. There are always seasons. So our job is simply to make our voices heard, meet with as many legislators as possible, tell them the stories — they too know post-abortive women — and if they’re honest about the experiences and the stories that they hear then our job is just simply to help them vote with their conscience,” she added.

Jeanne Mancini, president of the March for Life Education and Defense Fund, said one of the “rallying points” today is that “elections count.”

“Everybody who’s pro-life needs to really be active in the elections in Virginia and nationally, etc., because your vote really makes a difference,” she said.

The marchers gathered on the front lawn of the Virginia State Capitol, listening to rally speeches from various public figures and leaders in the pro-life movement, including Jeanne Mancini, Victoria Cobb, Delegate Kathy Byron of Virginia’s 22nd District, and many others.

Jeanne Mancini coined Virginia as “Ground Zero” for abortion laws in the country.

Rally speakers honed in on the abortion lobby’s efforts to pour three million dollars into the last campaign in order to elect radical pro-abortion politicians, who are in turn slashing the commonwealth’s decades-old pro-life laws. These sweeping measures remove the 24-hour waiting period before an abortion, enable others besides doctors to perform abortions, and withhold key information from the mother including viewing of the ultrasound and full explanation of the abortion procedure.

Despite this bleak reality, the Commonwealth’s pro-lifers prayed, cheered, and united to march for Virginia’s most vulnerable lives. In the words of Del. Kathy Byron, “by God’s grace, we will restore Virginia.”