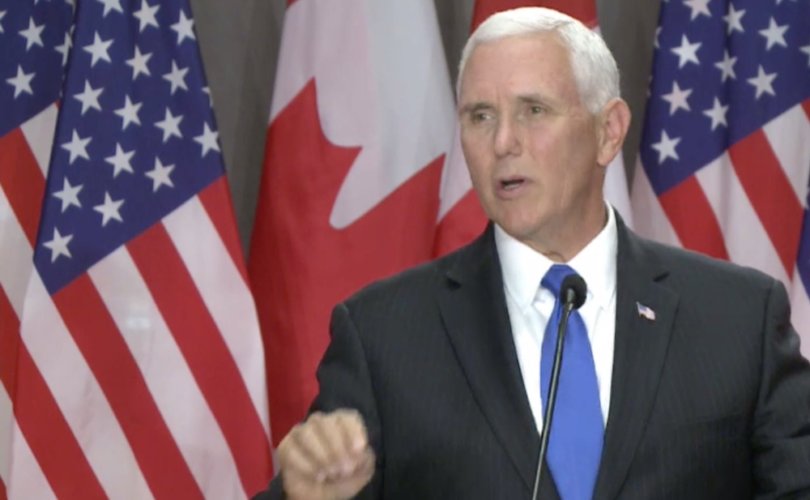 OTTAWA, May 30, 2019 (LifeSiteNews) – American vice president Mike Pence told Canadian Prime Minister Justin Trudeau Thursday he was “proud to be part of a pro-life administration” and that the Trump administration will “always stand for the right to life” and “stand for the sanctity of life.”

Pence made the remarks after a reporter questioned him and Trudeau on abortion at a press conference in Ottawa, where the two men have been meeting to discuss ratifying the new United States Mexico Canada Agreement (USMCA) trade deal.

Trudeau declared before the meeting he would tell Pence during his first visit to Canada as vice president he believed the United States is “backsliding on women’s rights.”

Canada’s prime minister, who has made unfettered access to abortion the cornerstone of his foreign and domestic policy, has decried the multiple pro-life bills being passed at the state level in the United States.

And in the lead-up to Canada’s federal election in October, Trudeau and the Liberals have been stoking the abortion issue, positioning themselves as champions of women’s “right to choose,” and the Conservatives as a threat.

“Obviously, I'm very concerned with the situation around the backsliding of women's rights that we’re seeing through Conservative movements here in Canada, in the United States and around the world. I will have a broad conversation with the vice-president,” Trudeau said Wednesday.

Trudeau confirmed at Thursday’s press conference he and Pence discussed abortion, along with a number of concerns such as China and Venezuela, during their closed-door sessions.

“I highlighted to the vice president that there was a significant amount of concern among Canadians on the new anti-choice laws being passed in America, a number of American states,” Trudeau said.

He also “highlighted” to Pence “that Canadians and indeed this government will always be a staunch defender of women’s rights and a woman’s right to choose,” Trudeau added.

“It was a cordial conversation but it is one on which we have very different perspectives,” he said.

Pence agreed that “one of the great things about the relationship between the United States and Canada is we’re able to be candid with one another,” but left no doubt as to his convictions.

“But let me be clear. I’m very proud to be part of a pro-life administration, and our administration has taken steps to stand for the sanctity of life at home and abroad,” Pence said.

“What we find troubling is the Democratic Party in our country, and even leaders around the country, supporting late-term abortion, even infanticide,” he added.

In what could be construed as a mild rebuke to Trudeau, Pence said the citizens of the United States and Canada will settle the issue within their respective countries.

“But those are debates within the United States, and I know that Canada will deal with those issues in a manner that the people of Canada determine most appropriate,” he said.

“But for President Trump, for me, for our administration, we’ll always stand for the right to life.”

When the reporter pressed Pence whether it angered him “to be sermoned by someone whose country it’s not happening in” the vice president said the conversation was  “very respectful” and that Trump “appreciates the relationship he has forged with Prime Minister Trudeau and so do I.”

“Look, friends can have difference of opinion and still be friends,” added Pence.

“I think what unites the United States and Canada is a shared commitment to freedom. It is a shared foundation of values and shared sacrifice through the generations, and it’s on that foundation that we will always stand,” he said.

“It’s extremely refreshing to see a conservative leader be unapologetic about his government’s support for the right to life,” said Campaign Life president Jeff Gunnarson.

“Additionally, Vice President Pence leaves it to the Canadian people to deal with these issues in a manner they deem most appropriate,” Gunnarson told LifeSiteNews.

Trudeau, on the other hand, “travels to the UN and around the world, dictating to developing nations on how they must liberalize their abortion laws,” he said.

Pence is to be lauded as a “great example for Christian politicians everywhere” and his success as a politician with known pro-life convictions “shows that men and women who stand on principle only increase their chance of election and re-election,” Gunnarson said.