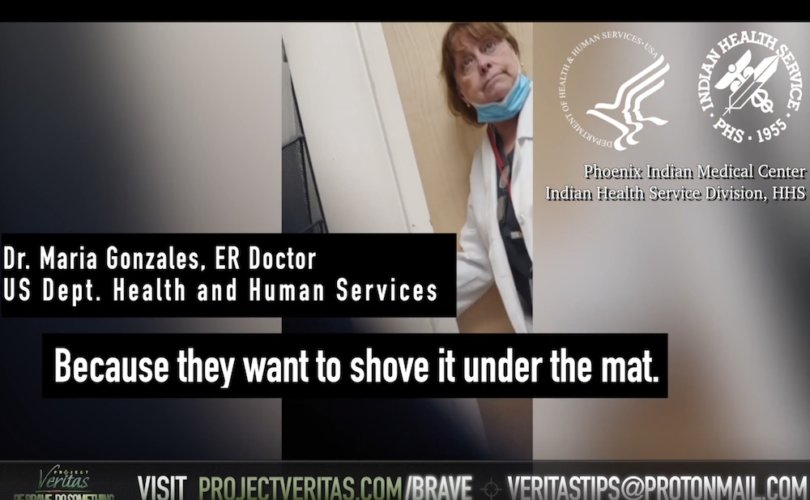 PHOENIX (LifeSiteNews) — The federal government is ignoring side effects from the COVID-19 vaccines that have been observed in federal hospitals, according to a bombshell report released Monday evening by conservative investigative nonprofit Project Veritas.

“What prompted me to do this was when I was House Supervisor one night, and one of my coworkers had taken the [COVID] vaccine two weeks ago, and she didn’t want to,” O’Malley told Project Veritas founder James O’Keefe. “She went throughout this entire pandemic working in the intensive care unit, which pretty much was a COVID unit … She didn’t want to take it because of her religious beliefs and she was coerced into taking it.”

O’Malley said she has “seen dozens of people come in with adverse reactions” to the COVID shots, yet their cases are not being reported. “So, what the responsibility on everyone is — is to gather that data and report it. If we’re not gathering data and reporting it, then how are we going to say that this is safe and approved for use?”

In one of the undercover clips, emergency room physician Dr. Maria Gonzales fumes that “they are not doing the studies. People that had [COVID] and the people that have been vaccinated – they’re not doing any antibody testing.” O’Malley then references a patient suffering from shortness of breath after his second dose of one of the COVID vaccines, to which Gonzales says “he’s probably got myocarditis … due to the vaccine.”

“They are not reporting,” Gonzales lamented. “Because they want to shove it under the mat.”

O’Malley told O’Keefe that the patient in question was in his 30s and had congestive heart failure, but his case was not reported.

In another clip, Gonzales calls the lack of reporting on adverse events and the COVID vaccines after eighteen months “fishy.” Emergency room physician Dr. Dale McGee interjects to suggest that the research has probably been done, but simply hadn’t been published yet. Gonzales shot back that it “hasn’t probably been done because the government doesn’t want to show that the darn vaccine is full of s–t.”

More undercover video shows another nurse at the facility, Deanna Paris, attesting that she saw “a lot” of people who “got sick from the side effects” of the COVID vaccines, but “nobody” is reporting them to the federal federal Vaccine Adverse Events Reporting System (VAERS) “because it takes over a half hour to write the damn thing.”

“It’s a shame they [the government] are not treating people [with COVID] like they’re supposed to, like they should,” Paris said. “I think they want people to die.”

One of the report’s most alarming undercover clips concerns medical administrators’ and regulators’ hostility to ivermectin, a World Health Organization “essential medicine” that has been used for decades to treat other ailments, for which “promising” research is being conducted into its applicability to treating COVID, and which is being used to great effect by doctors around the world.

But in the undercover video, pharmacist Gayle Lundberg tells O’Malley that prescribing ivermectin off-label to COVID patients is “not allowed at this facility” because “they did it with hydroxychloroquine, and they, it was really bad.” (What “really bad” means in this context was not explained.) “I am stuck. I am told you are absolutely not to use [ivermectin] under any circumstances whatsoever for somebody with COVID, unless you don’t want to have a job,” Lundberg said. “I am not going to lose my job over this.”

“We have to do something. Right now, what is plaguing this country is the spirit of fear,” O’Malley told O’Keefe. When asked if she was afraid of reprisals, she suggested that she expected them, but “I wouldn’t necessarily say I am afraid because my faith lies in God and not man.

“So, I have two older kids that are on their own, and I have a twelve-year-old at home that I care for on my own, but you know, what kind of person would I be if I knew all of this — this is evil,” she continued. “This is evil at the highest level. You have the FDA, you have the CDC, that are both supposed to be protecting us, but they are under the government, and everything that we’ve done so far is unscientific.”

Following the release of the report, which is part one of a series, Phoenix Indian Medical Center acting CEO Holly Elliott issued a statement calling the video’s revelations “distressing” and claiming the facility “will investigate.”

UPDATE: Phoenix Indian Medical Center Acting CEO RESPONDS to Veritas BOMBSHELL! “We take all complaints seriously and will investigate…We recognize that some of the information contained in this video is distressing.” pic.twitter.com/3bM8PRFvA7

The Veritas report comes as many Americans harbor concerns that the COVID vaccines have not been sufficiently studied for negative effects, given their accelerated clinical trials. Vaccine defenders note that the one-year development period was not starting from scratch, but rather relied on years of prior research into mRNA technology; and that one of the innovations of the Trump administration’s “Operation Warp Speed” was conducting various aspects of the development process concurrently rather than sequentially, eliminating delays unrelated to safety. However, those factors do not fully account for the condensing of clinical trial phases — each of which can take anywhere from 1–3 years on their own — to just three months apiece.

While cases of severe harm reported to VAERS after taking COVID vaccines represent less than one percent of total doses administered in the United States, a 2010 report submitted to the HHS Agency for Healthcare Research and Quality (AHRQ) warned that VAERS caught “fewer than 1% of vaccine adverse events.” On the problem of underreporting, the VAERS website offers simply that “more serious and unexpected medical events are probably more likely to be reported than minor ones” (emphasis added).

In May, NBC News published a report acknowledging experts’ concerns about “gaps” in federal monitoring of the COVID vaccines. While the government currently relies on a “hodgepodge” of sources for safety data, the report explained, the quoted experts call for a more “robust ‘active’ surveillance system [that] can search large volumes of patient care records to compare rates of adverse events in people who received vaccines with those who didn’t.”

The new Project Veritas report appears to vindicate suspicions that the question of the COVID vaccines’ safety has been tainted by the political agendas of the medical establishment and public-health bureaucracy. The Biden administration has invested heavily in the narrative that the vaccines are the key to ending the pandemic, most recently by announcing that private companies with 100 or more workers will be required to mandate either vaccinations or weekly testing.

So far, more than twenty Republican-controlled states have said they are planning or exploring lawsuits against the Biden vaccine mandate. LifeSiteNews has also prepared a resource to help readers facing such mandates at work pursue and defend religious, medical, or conscience exemptions.

In the meantime, Jodi O’Malley’s son John has launched a crowdfunding campaign to make up for the salary, health benefits, and pension funds she is likely to lose as a result of her stand. As of Tuesday morning, the campaign has raised more than $223,000.