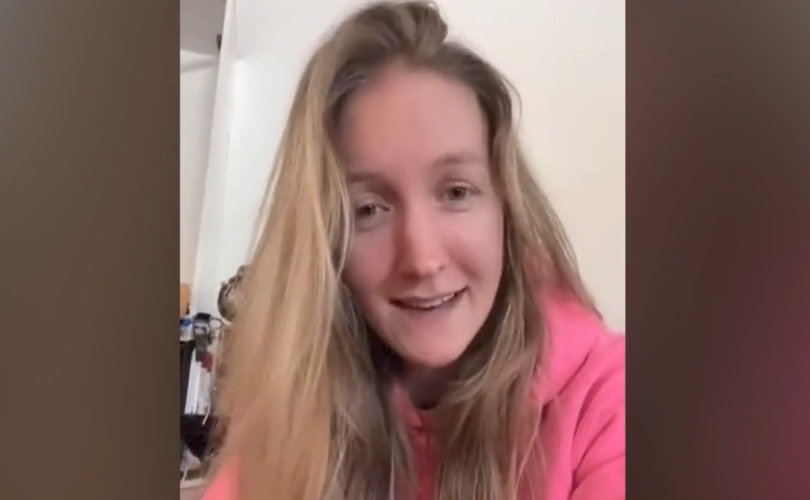 (LifeSiteNews) — A woman who says her firefighter husband was injured by the COVID shot made an emotional video giving support to the Canadian truckers’ “Freedom Convoy.”

The young Canadian woman can be seen holding back tears while explaining how grateful she is for the convoy currently in Ottawa standing up against vaccine mandates. In her emotional video, she outlines how her firefighter husband contracted myocarditis after the first dose of the experimental COVID-19 vaccine, but still lost his job as he was unable to get “fully vaccinated” and did not qualify for an “exemption” for the second shot under the strict medical regime in Canada.

“I want to throw a shoutout to the truckers, in this ‘Freedom Convoy 2022,’” states the woman who goes by the name Jenn Suzanne on social media.

“My goodness, you guys have no idea how much what you’re doing means to me and my family,” added Jenn Suzanne. “See, my husband got myocarditis after his first dose, and the doctors have refused an exemption for the second one.”

Jenn Suzanne explained that as a result of her husband failing to qualify for an “exemption” despite having a serious injury from the initial dose, he could no longer continue working as a firefighter.

In a previous video on her social media account, Jenn Suzanne appeared with her husband to explain what exactly occurred when he was rushed to the hospital three weeks following his first dose, and how myocarditis, a potentially fatal heart inflammation condition, was not a “mild” experience like the media so often states.

According to her husband, Elgar, the pain in his chest was so severe he thought he was having a heart attack, which was also the hospital staff’s first thought. It was not until he was transferred to a major hospital that it was determined he was suffering from myocarditis, a known side effect of the COVID gene-therapy injections.

While government and media have a history of downplaying the potential side effects of the experimental shots, despite millions of reported injuries and thousands of deaths, there’s a growing number of doctors sounding the alarm, especially considering the jab is being pushed so forcefully on young people who are at limited statistical risk from COVID-19.

According to University of British Columbia professor of medicine Dr. Steven Pelech, “Contrary to what a number of people have said, there is no such thing as ‘mild myocarditis.’”

“Why would you want to submit people who are unlikely to be negatively affected by the virus itself with vaccines that have now been proven, in scientific literature, to be associated with health risks?” asked the doctor last August.

Pelech also noted that when the heart cells die from myocarditis, “they are not replaced in your body and are instead replaced by scar-tissue, which is from fibroblasts.”

The “Freedom Convoy” currently protesting COVID measures in Ottawa has managed to push opposition to medical tyranny into the mainstream political conversation, despite widespread support for such measures from both the Conservative and Liberal parties over the past two years.

In recent days, Saskatchewan’s Premier Scott Moe announced he is planning to axe all public health measures in his province by the end of February, the premier of Quebec announced he is scrapping his controversial “health contribution” tax that would have financially penalized the unvaccinated, and the Conservative Party ousted their pro-COVID mandate leader Erin O’Toole.