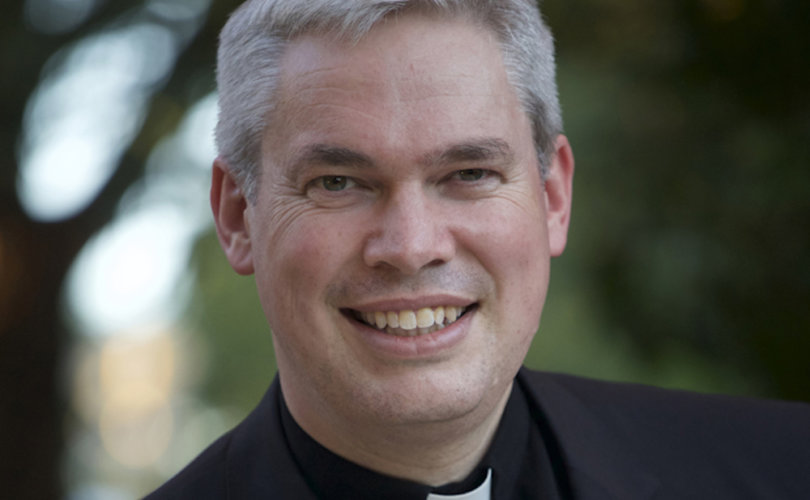 AUCKLAND, New Zealand, October 21, 2016 (LifeSiteNews) — Australia’s newest bishop is warning the West that the more it rejects God, the more it destroys the very foundation buttressing the values it holds most dear, including compassion, freedom, and equality.

“We live in a society that has rejected God but still tries to hold onto the values that really come from a Christian understanding,” said Bishop Richard Umbers, who was made the auxiliary bishop for the Archdiocese of Sydney by Pope Francis in August.

“[But] without God, without the foundation for the values we hold to — of care for one another, of compassion, of even freedom and equality, which is grounded upon the dignity of each human being, because we are made in the image and likeness of God — when you remove that, you remove the basis for that understanding,” he said in a video interview with LifeSiteNews.

LifeSiteNews caught up with Bishop Umbers while he was in New Zealand as the main celebrant for the youth conference LifeFest, organized by Family Life International.

Umbers said that when a Christian society formally rejects God, it no longer has the ability to understand itself and what it means to be human.

“In the American Constitution centuries ago, they said: ‘We hold these truths to be self-evident.’ Well, they are self-evident within a particular culture and it’s a culture that has been shaped by Christianity. You remove that, you remove then the self-evident nature of what it means to be human,” he said.

“With a loss of faith, and loss of the sense of God, we lose the meaning behind the values we’ve held onto from all those centuries in Christianity,” he added.

The bishop related an encounter he once had with a homeless man, an atheist, who he said helped reveal to him the depersonalization that results when a society rejects God.

“I was outside the Cathedral [in Canberra] and there was a fellow there who was homeless. I think he had been drinking. He was talking to the bushes, and he looked at me and grabbed a hold of me and said come on down, and had a chat with me for an hour,” he related.

The homeless man turned out to be well-versed in literature and, to Umbers’ surprise, had a keen mind. The homeless man related how he had been in a number of psychiatric institutions.

But what the homeless man related next is something the bishop said he will never forget.

“[He said to me] ‘Father, I can see you are a Christian. I respect that. I’m not a Christian. I don’t believe in Christianity. But I will say this: What has come to replace Christianity is far inferior. It is something that I fear. I have seen this during my time in the psychiatric institutions, in the way that I have been dealt with.”

The Bishop interpreted the homeless man’s experience this way: “It’s the way we have become very procedural, in which we really do feel — in a bureaucratic rational situation — that we’re just numbers, where that interpersonal human touch has somehow been lost, where people become clients — even the homeless become clients — rather than people in whom you see Jesus Christ and treat with that charity.”

The bishop concluded that people are right to fear living in a society that has jettisoned faith in God, because in doing so, it no longer retains the moral vision of how to “deal with other people.”