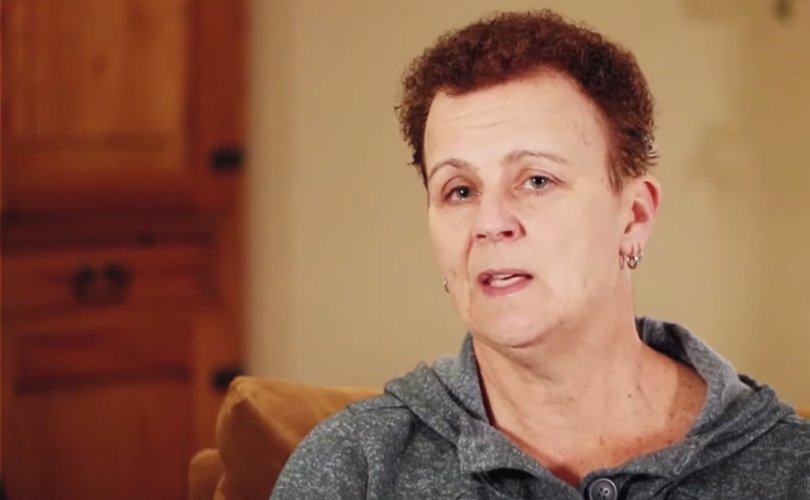 OTTAWA, Ontario, March 11, 2020 (LifeSiteNews) – A woman who lived as a man for eleven years before receiving healing has delivered a powerful and direct message to Canadian senators, urging them to vote no to a bill which would make it illegal to advertise or profit from “conversion therapy” aimed at helping LGBT people overcome unwanted sexual conditions.

“Senators of Canada, I would encourage you to vote no on Bill S-202. Without the help of discipleship ministries and counseling, I could not be living in my biological sex healthy and whole,” said KathyGrace Duncan in an exclusive joint video message produced by LifeSiteNews in collaboration with Campaign Life Coalition (CLC).

“I lived as a man for 11 years and I walked out of that 27 years ago. Change is possible, I know, because I have changed,” said Duncan in the video message.

Duncan made it clear in her message to senators that it’s wrong to deny same-sex attracted and gender-confused people the option of pursuing change in their orientation, identity, or behaviors, if they so choose.

She said in “voting no” against the bill, senators would allow “hope to continue” to those like herself who are seeking help from counseling or church-based ministries. Churches are “offering healing and restoration to those who struggle with unwanted same-sex attraction, homosexuality, or gender confusion,” she said.

The bill would take away a person's ability to find the help they need, she said.

Jack Fonseca, director of political operations for CLC, said to LifeSiteNews that video messages such as Duncan’s serves as the only way to combat the “relentless propaganda about ‘conversion therapy’ as a form of ‘torture’ that is ‘discredited’ and ‘does not work’.”

He added that sharing this video with Canadian politicians and the public shows everyone “true stories, in video form, of people who benefited from counseling and who’ve experienced genuine change and happiness.”

Fonseca noted that the mainstream media’s lie that same-sex attracted individuals and those who identify as transgender, are somehow forced to change, is simply not true.

“They know perfectly well that thousands of ex-gays and ex-transgenders exist, but are pretending that they don’t, in order to advance their political goal of silencing the Christian Church once and for all,” said Fonseca to LifeSiteNews.

“Our third installment in this video series will be the testimony of a Toronto man who left the gay lifestyle completely. The media would have you believe he doesn’t exist either.”

The first video released to combat the lies surrounding “conversion therapy” featured a Canadian man who had hormone injections and surgery to live like a woman for 18 years. In his video, Robert John Wenman asks Canada’s politicians to not ban counseling that he says saved his life.

The Senate bill mirrors in many ways Bill C-8, which was tabled by Justice Minister David Lametti in the House of Commons on March 9.

Duncan said that she struggled with gender dysphoria very early on in her life and longed to be a boy.  She grew up in a home where her dad abused her mom, which led her to believe that women were “hated vulnerable and weak.”

When she turned seven years of age, her brother was born and he was celebrated in a way that led her to believe that girls were replaceable. This led her to decide that she needed to “become a boy” to be affirmed.

She also said that the sexual abuse she suffered by a family member from the ages of 10 to 12 furthermore drove home the message in her head that women were weak and vulnerable.

When she turned 19, she began to take male hormones and changed her name to “Keith” to become a  man. Shortly after this, she fell into a deep pornography addiction which led to a dysfunctional relationship.

One night, on her way to church for a music practice, she said the Lord called to her saying, “Will you now, will you now.”

Duncan said that it was at this moment she felt the Lord was calling her to return to him, so she answered, “Yes Lord, I will.”

It was after her yes to Jesus that she was able to overcome her pornography addiction. She also then had an encounter with Jesus which at that point made her realize that she needed to “go back to being the woman that God created me to be.”

Duncan serves in Women's Ministry for the Portland Fellowship, a non-profit Christ-centered interdenominational ministry whose purpose is to “glorify Jesus Christ by proclaiming His incredible power to release people from being controlled by their desires.”

She is one of nine former transgender individuals that filed an amicus brief in August 2019 with the U.S. Supreme Court in hopes to stop the court from making employers “tell a person he or she can select a gender and truly become the opposite sex.”