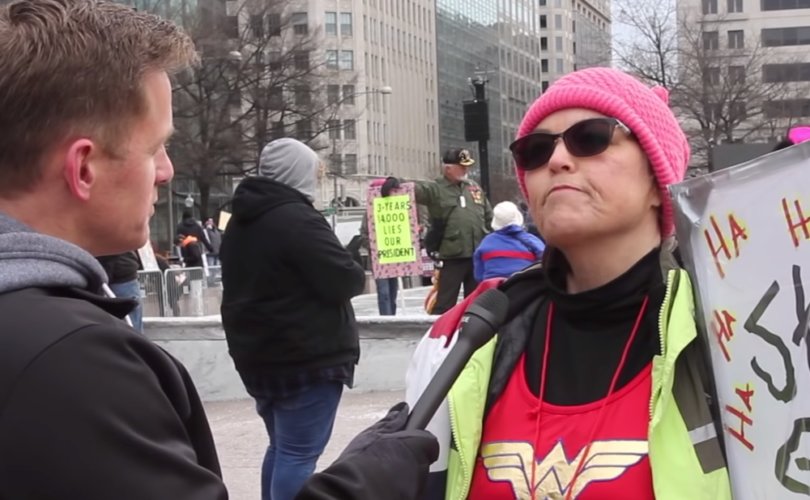 Joseph Backholm asks a woman at the Woman's March to define what it means to be a woman, Washington D.C., Jan. 20, 2020. What Would You Say / Youtube screen grab

WASHINGTON D.C. January 28, 2020 (LifeSiteNews) – Women at the fourth annual Women’s March were either stumped or gave unscientific answers when asked to define what it means to be a “woman.”

Joseph Backholm of the Colson Center for Christian Culture button-holed marchers on the streets of Washington D.C. on January 20. There, the participants carried signs and shouted slogans in favor of abortion, LGBTQ rights, and various feminist causes.

When Backholm asked one young marcher to define her sex, she responded on camera: “A woman is anyone who defines as a woman, simple as that.”

Humorous light jazz music playing in the video’s background provided a fitting atmosphere for additional answers that were given on the definition of “woman.”

“We're selling uterus pins, but that doesn't mean that if you have a uterus you're a woman or if you don't have one you're not a woman,” said one woman.

“So, I think a woman is someone who chooses to express themselves,” said another.

“We can express our womanhood in so many ways that it is just unfathomable,” said another woman. Such an expression “can be in the feminine way, but it also can be in a non-binary way as well,” said a different woman.

When an elder female was asked the same question, she said, “In a short interview, I’m not even sure how to answer that.”

Many marchers held signs denouncing President Donald Trump. The participants appeared in significantly smaller numbers than in years past. In 2017, on the weekend of Trump’s inauguration, allegedly 100,000 marchers descended on the nation’s capital to register their disgust over the newly-elected president’s perceived mistreatment of women before his election. Celebrity feminists, such as Gloria Steinem and Madonna Ciccione, attended the first rally, as did leftist activists and Hollywood celebrities.

Women’s March 2020 had a more diffuse purpose, since it was concentrating not only on feminist issues, but also on climate change and immigration. The organizers of this year’s march had applied to the District of Columbia for a protest permit for no more than 10,000 people. In an interview with NPR, Connor Czora said he was there to support women protesting against the president and his “divisive rhetoric” and “his attacks on women and trans people.”

Many of the women on the march were wearing the pink stocking cap that has become an iconic symbol for modern feminism. There were many who held signs reading, “Trump, Pence, out now!” and “ERA now!” Plenty of rainbow LGBTQ flags and signs were in evidence, too.

One member of a pair of apparently college-age women responded to Backholm’s question: “I think a woman is, if you identify as a woman, if you want to be a woman, you are a woman. Backholm asked one of the women wearing a pink cap if there are innate differences between men and women. Pausing in apparent confusion, she answered, “I don’t know how to answer that, actually” and giggled.

Another woman, bearing a pink cap, was asked if anyone can be a woman. She answered, “A physical woman, if they would like to.” Another responded, “Yes, it’s a choice,” while an older woman said, “Yes, yes, because it’s a mindset.”

In the background during a sequence of the video, a young woman held up a placard that read: “Sorry, I can’t hear you over the sound of your straight, white male privilege.”  Earlier in the video, Backholm asked an elderly woman to identify the cause of inequality of men and women. She answered: “I think the biggest challenge is the mindset of a lot of white men, in particular, in this country. A younger woman claimed that the cause is the Trump administration, “Hands down.”

The Women’s March in Washington D.C. was mirrored in dozens of other cities elsewhere in the world, including Chicago, Los Angeles, and Brussels. Last year, three founding board members of the Women's March stepped down, due to charges of anti-Semitism linked to the group’s positions on U.S. policy toward the Middle East. Marching from Freedom Square to the White House, participants heard a group of Chilean feminists as they worked up their leftist street theater routine, dubbed  “Un Violador En Tu Camino” (“A Rapist in Your Path”).