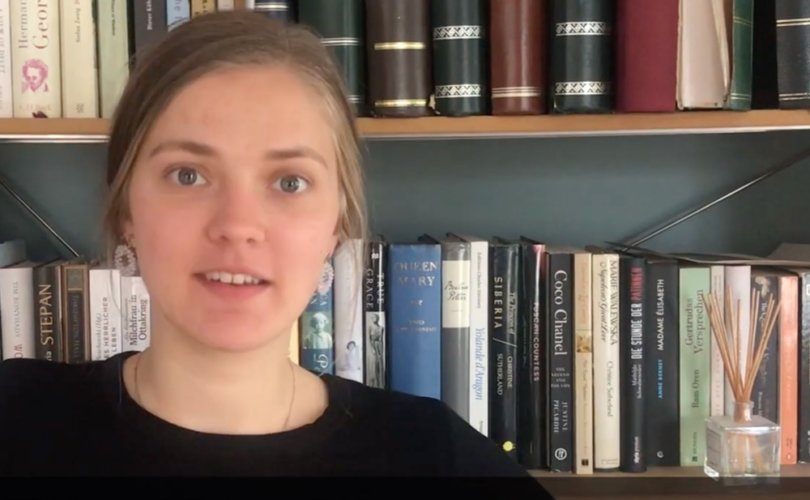 A young woman pleads with Austrian bishops in an April 19, 2020 video to 'give us back Holy Mass'Einige junge Katholiken aus Österreich / Youtube

April 20, 2020 (LifeSiteNews) – A number of young Catholics in Austria have pleaded with their bishops to “please, give us back Holy Mass.”

In a short video released Sunday, the young people are directly addressing the bishops, humbly asking to be able to go to Holy Mass again, which had been banned because of the coronavirus pandemic.

The young Catholics even suggested how they would help with practical issues of reopening churches while keeping people safe. “We want to support our shepherds and offer our help,” one man said.

“We will be there during the Mass to make sure nobody is less than six feet apart,” another man added in the video, which has been released not only in the original German, but with English, Spanish, and French subtitles, as well.

The pews would be disinfected after each church service. “If there is a lack of resources, we will organize the masks, hand sanitizer, and gloves,” a young woman offered.

Finally, the young people would provide lists on Doodle, making sure of the number of people signing up for each Mass.

“Dear Austrian Bishops,” the video started out, “we know that this is a very difficult time, but we ask one thing. Give us back Holy Mass!”

As in many other countries, only businesses deemed essential were allowed to stay open during the coronavirus pandemic. At this point, other small businesses may again be open to the public, too. The video asked, “What could be more essential for us than Holy Mass?”

“The Church, the Sacraments, the People of God are concrete,” the Pope said.

The video made by Austrian Catholics concludes with everybody asking of the bishops, “Please give us back Holy Mass!”

On March 11, dioceses across Austria first dispensed Catholics from fulfilling their Sunday Mass obligation, “should participation in Sunday services not be possible or advisable.”

Mass attendance, especially on Sundays, was made almost impossible by a government decree, which prohibited events indoors, if more than 100 people are present. Similarly, only 500 people were allowed to congregate for events outdoors.

Many parishes in Austria have congregations that are a lot larger.

Cardinal Christoph Schönborn, the Archbishop of Vienna, announced, “Within the Archdiocese of Vienna we accept the guidelines of the federal government regarding the coronavirus preventative measures. They therefore apply to all forms of worship and church events.”

Parish priests, he added at the time, have to ensure that the measures are implemented locally.

The Archdiocese of Vienna said Holy Communion should not be received on the tongue, but in the hand. Catholics in Austria were also told not to drink the consecrated wine from the chalice. The use of Holy Water and the practice of the sign of peace should also be avoided.

A few days later, beginning March 16, the Austrian bishops banned all Masses and other church services. Funerals were ordered to take place with only very few people. Requiem Masses had to be pushed back to a later date.

“I am aware that these are serious measures that we do not take lightly,” the Vicar General of the Archdiocese of Vienna said. “All this is about protecting, above all, the group of old and sick people who are most at risk. The measures are an expression of a properly understood Christian love of self and of neighbor.”

“We as a Church do not stop being there for the worries and needs of people in a responsible way, praying for them and celebrating the Eucharist, especially in this difficult situation,” he explained.

Even though small businesses are allowed to open again, the stay-at-home order is still in place. “Apart from emergencies, shopping, and the way to work, you may therefore only move outside if you are traveling alone or together with your housemates and keep at least one meter distance from other people,” Austrian public television station ORF summarized.

There will be no events until the end of June, and school will resume only in mid-May, at the earliest. Austrians are required to wear masks in stores and while using public transportation.

Austria has a population of just under nine million people. 470 of those have died from coronavirus. Less than 15,000 had tested positive for it.

Like the young Catholics in the video, several members of the hierarchy had pointed out that Masses are as important as stores, and requirements of public health could be observed within church buildings.

“Just as we are able to purchase food and medicine, while taking care not to spread the coronavirus in the process, so also we must be able to pray in our churches and chapels, receive the Sacraments, and engage in acts of public prayer and devotion, so that we know God’s closeness to us and remain close to Him, fittingly calling upon His help,” Cardinal Raymond Burke emphasized. “Without the help of God, we are indeed lost.”

Archbishop Carlo Maria Viganò said, “I understand and share the basic worries about safety and protection which the authorities require for public health. However, just as they have the right to pass measures for things affecting our bodies, so the Church authorities have the right and the duty to worry about the health of our souls.”

“They cannot deny the faithful the spiritual sustenance they receive from the Eucharist, not to mention the Sacrament of Confession, Mass, and Viaticum,” the former Apostolic Nuncio to the United States explained.

Bishop Athanasius Schneider stressed that as long as supermarkets are not closed, “and as long as people have access to public transportation, one cannot see a plausible reason for banning people from assisting at Holy Mass in a church. One could guarantee in churches the same and even better hygienic protective measures. For example, before each Mass one could disinfect the pews and doors, and everyone who enters the church could disinfect their hands.”

“Other similar measures could also be taken,” the Bishop continued. “One could limit the number of participants and increase the frequency of Mass celebration.”