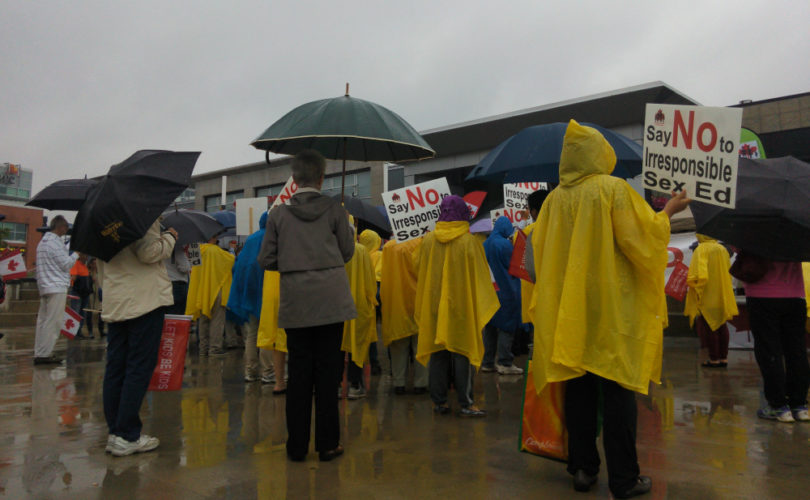 But trustees opposed a motion to hold information sessions for parents on the sex-ed agenda by a vote of 7 to 3, fearing that would send a signal to parents that the board could change the curriculum.

Parents like Helen and Bruce Synder were left feeling frustrated after the highly charged meeting. Inviting Liz Sandals for a Q&A “does not really deal with the actual problem that this curriculum is set for implementation in September,” Helen told LifeSiteNews in an email.

“We were very upset that the trustees did not seem to be open to the comments made by the delegations who spoke about the impact of this curriculum on our children.”

But Jack Yang, father of an eight-year-old son and six-year-old daughter, told LifeSiteNews in an email that he thought the “amazing” delegations did, in fact, stir trustees’ concern with their “passion and scientific facts.”

He admitted, though, that the parents he works with are “mostly immigrants” and unfamiliar with political involvement.

“We are a group of desperate parents for sure, searching for help [to] raise our voice,” Yang wrote. “We don’t like protesting, we don’t like shouting, but that’s so far what we can think of to protect our kids.”

Jack Fonseca, project manager for Canada’s national pro-life, pro-family lobbying group Campaign Life Coalition (CLC), warns that the Liberals will feel the backlash from parents. Liberal MPPs should “pay attention to this uprising by moms and dads in Waterloo region, and across Ontario” and be “well-advised to take the side of parental rights, to publicly push back against their own Leader and to quickly disavow the curriculum.”

“These parents are mad as hell,” Fonseca said. “They won’t forget and they won’t forgive a government that’s intent on sexualizing their kids.”

Indeed, the Friday before the board meeting, over 100 protestors crowded Waterloo Town Square to rally against the sex-ed curriculum, and listen to MPP Monte McNaughton, Lambton-Kent-Middlesex, and CLC Toronto vice president Jeff Gunnarson.

Acton-based psychiatrist Dr. Nadine Nyhus took advantage of Monday’s board meeting to express grave concerns about the sex-ed curriculum, after “trying for months” to get through to the Ministry of Education, she told LifeSiteNews in a telephone interview. Nyhus, whose presentation can be seen here, also told LifeSiteNews that the sex-ed curriculum contains “medically unsound” information and is misleading because it minimizes the consequences of sexually transmitted diseases and HIV infections.

She told LifeSiteNews that some research shows HIV infection among teens is on the rise:  “And it’s because of this type of curriculum, that downplays everything,” she added, “It promotes the value of enjoying sex and the pleasures of sex without discussing any of the real risks. So it’s really, really misleading, and misinformation.”

Nyhus also faulted the sex-ed curriculum for not teaching children “how to keep safe around the risk of being trafficked.” She told LifeSiteNews that an October 2013 RCMP report revealed that Canadians aged 14 to 22, especially girls, are particularly at risk for human trafficking. And the sex-ed curriculum also is silent on pornography. In her view, Nyhus said, “It’s not about safety. There’s another agenda.”

The Synders told LifeSiteNews that they see the Liberal sex-ed curriculum as “an attempt to change the longstanding religious and cultural traditions of Canadian society.”

They’re worried that “by presenting these ideas of gender fluidity, pleasure seeking activities, and making plans for sexual activity” the sex-ed curriculum will “promote sexual experimentation and increased promiscuity, along with increased rates of STIs [sexually transmitted diseases].”